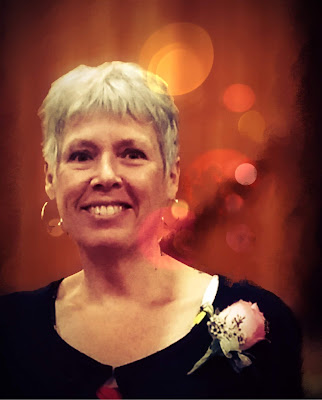 Jenn McKinlay: Look who is visiting us from the chilly north! Canadian Vicki Delany! One of my fave mystery authors of both traditional and police procedural, she's here to tell us all about her latest release THERE'S A MURDER AFOOT, which is out today!
Vicki Delany: The protagonist of the Sherlock Holmes Bookshop series is Gemma Doyle, an Englishwoman who has come to the town of West London Massachusetts, on Cape Cod, to help her great uncle Arthur Doyle run the Sherlock Holmes Bookshop and Emporium. 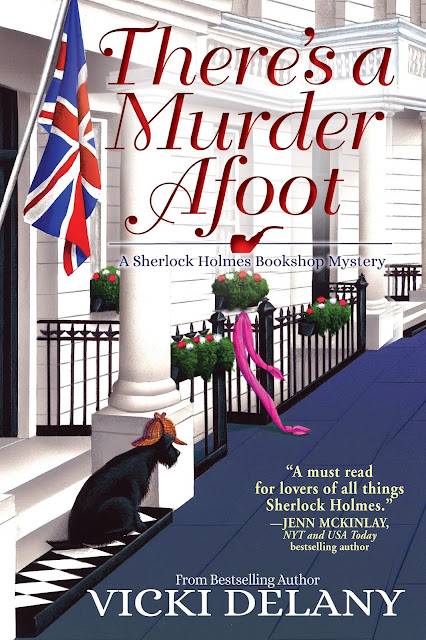 For the fifth book in the series, I thought it would be fun to take Gemma and the gang to London, to tread the streets as walked by Sir Arthur Conan Doyle and, fictionally speaking, The Great Detective himself.
London is Gemmas natural environment.Hailing black cabs, leaping on and off tube trains, dodging CCTV cameras and Scotland Yard detectives, slipping out the back door of Harrods.Eating steak and kidney pies and prawn sandwiches and drinking copious cups of properly-prepared tea.
London might be Gemmas environment, but it isnt mine.
So off I had to go to London.
In that, I seem to have a lot in common with the Jungle Reds gang. I know Deborah has learned the city intimately, its close to where Rhys is from, and Jenn has set a series there.
I dont know it well at all.But I had enormous fun finding out and I hope thats reflected inTheres a Murder Afoot, the fifth in the Sherlock Holmes Bookshop series from Crooked Lane Books
I took five days one November to travel to London with one of my daughters, and used so much of what I learned in the book.

Gemma and friends stay in the hotel we stayed at (Bentleys in South Kensington) they eat at the restaurants we ate at (the Hereford Arms, where Sir Arthur Conan Doyle was a regular when he was president of the College of Psychic Studies, located nearby;

Garfunkels at South Kensington station, The Crutched Friar near Tower Hill) and pick up croissants from Pauls Boulangerie (to die for). I tracked Gemmas progress on the tube as she travelled across the city, although I didnt need to leap on and off trains as the doors closed, time my progress, or watch for people showing too much interest in me.I scouted out the streets of South Kensington and located the street Gemmas parents live on (Stanhope Gardens, but I dont actually specify the house).


I studied the courtyard outside of the Tate Modern and the Millennium footbridge over the Thames trying to estimate how one would escape pursuit (by running faster than your pursuers, I concluded).I went to the sculpture hall in the Victoria and Albert and decided that would be Gemmas favourite place in the city, the one place in particular she wants to show Ryan Ashburton, if they ever manage to have some time alone together.
I even had afternoon tea at the restaurant in the National Portrait Gallery, so Gemma could recommend it to Jayne.
Yes, my dedication to research is impressive, if I do say so myself.
You might be surprised to hear where I didnt go: Baker Street, the Sherlock Holmes Museum, the Sherlock Holmes Pub, on a Sherlock Holmes walking tour.
Because Gemma isnt interested in those things. Instead she sends Jayne, Ryan, Grant Thompson, and Donald Morris around the tourist traps of London, to keep them (Ryan in particular) from finding out whats shes up to, and wanting to help.As her sister Pippa (a minor functionary in the British government) tells her, Ditch the entourage.
The big problem with doing this sort of research, Ive found, is trying to decide what to keep OUT of the book. Im not writing a tour guide to London here, but I do want to bring the city alive to my readers.

I hope I found a happy medium. Tell me, dear Jungle Reds reader, do you enjoy real-life settings in your books, or do you prefer the truly fictional?
Vicki Delanyisone of Canadas most prolific and varied crime writers and a national bestseller in the U.S. She has written more than thirty-five books: clever cozies to Gothic thrillers to gritty police procedurals, to historical fiction and novellas for adult literacy. She is currently writing four cozy mystery series: the Sherlock Holmes Bookshop series for Crooked Lane Books, the Year Round Christmas mysteries for Penguin Random House, the Lighthouse Library series (asEva Gates) for Crooked Lane, and the forthcoming Tea by the Sea mysteries for Kensington.
Vicki is a past president of the Crime Writers of Canada and co-founder and organizer of the Women Killing It crime writing festival. She is the 2019 recipient of the Derrick Murdoch award for contributions to Canadian crime writing. Vicki lives in Prince Edward County, Ontario.