My own obsession with Scrabble began in the summer of 2009 in the sweltering heat of Austin, Texas, where I was a graduate student studying economics. As a kid, I had always hated the game, much like Katz-​Brown, associating it with interminable, low-​scoring affairs at the kitchen table that I inevitably lost to my elders. But I also fell down a Word Freak rabbit hole. Stefan Fatsis painted a picture of obsessed geeks sleeping with the dictionary, traveling around the country to exciting tournaments. It was like an über-​nerdy On the Road.

The problem when you start playing Scrabble—​especially if you start as a kid—​is simply that you don’t know many words. The words are the rules, and so it’s not just that you’re bad at the game, it’s that you don’t even know what the game is. You spend a lot of time trying to figure out how to make a word, any word, with the tiles on your rack, and then trying to figure out where to play them, and discovering that the whole enormously frustrating effort was worth, like, six points. There is something magical, however, about realizing how to play Scrabble even one step above beginner: using the bonus spaces, creating overlapping words, hitting your first bingo. You also learn how to play defense.

The first time you realize that your opponent is stuck with the Q and you make a crucial play to deny her the legal two-​word layup QI, securing yourself the victory, well—​that’s magic. It was this sequence of unfolding skills that eventually endeared me to the game—​I realized what this game is, that it is the creation of something from nothing. It felt valuable to learn and exercise a craft, even if it was “just a game.”

My own obsession with Scrabble began in the summer of 2009 in the sweltering heat of Austin, Texas.

This feeling is not unique to Scrabble, of course; it’s ancient and universal. “This has to do with this larger, Aristotelian picture of the flourishing life,” Gwen Bradford, a philosopher at Rice University who has studied games, told me. “It has to do with the exercise and development of our core human capacities, our characteristic capacities. There’s rational activity or thinking on the one hand, but also wielding on the other. Exerting effort, engaging in activity, that’s always good, because that’s just what it is to be a human being.”

Once you overcome the initial tedium, the game is thrilling. Anagramming is an addictive intellectual rush. Unscrambling AAABLOPR, DFGGHIOT, or EILLMNOU for the first time feels like exercising a minor superpower. Once you know basic technique, games quickly become intense shootouts and rich contests of strategy. Falling into Scrabble is like learning a new language—​unlocking vaults of pattern and recognition and meaning—​except that the language was already your own.

Once you’ve leveled up with basic strategy, you are ready to unlock its innermost beauty. But to do so, one must study. One first learns the “twos,” or two-​letter words, the shortest playable words in the game. There are 107 of them these days. Many of them are already familiar: AN, IT, OF, WE. But many are not: AA, AI, XI, XU. Then one moves on to the threes, of which there are 1,082. Many of these are also initially familiar: AND, CAT, THE, WHY. But many are also not: AVO, CWM, LAR, ZAX. Then the fours, of which there are 4,218—​AGLU, CORF, HOWK, QOPH. And so on. While the long words are beautiful and often high-​scoring, the short words are the nucleotides that hold together Scrabble’s DNA. These short words are so important and familiar and commonly played by good players that they are like monkish prayers, repeated, internalized, and subconsciously incanted.

The Austin Scrabble Club met on Mondays in a dingy back room with dodgy air-​conditioning in the Austin Recreation Center. There, a dozen or so players would pay a dollar to play three games, a fee that often left me short of quarters for laundry. I was nervous about transforming what had been a private fixation into a public performance. In my first game I picked up the letter bag from the wrong end, spilling tiles across the linoleum floor.

But I steadied myself. In my first night at the club, I played three bingos: ERODING, GEARING, and OUTSIZE, the last for 123 points. I was hooked. Finding order in the chaos, turning a heap of letters into a beautiful spider web of words on the board, was magical—​and addictive. The best Scrabble players are like wizards, and I wanted to become a member of their order.

The feats of top human Scrabble players are difficult to comprehend. For starters, there is the sheer scale. One linguistic study has found that just two thousand root words provide coverage for around 99 percent of spoken English-​language discourse. Other researchers have found that many adults have an overall vocabulary of some thirty thousand words. There are, however, 192,111 words in the latest edition of the Scrabble dictionary used in North American play—​roughly an order of magnitude more words than a typical working vocabulary. There are 56,875 seven-​ and eight-​letter words alone, the words most often played for bingos and their valuable fifty-​point bonus.

Top Scrabble players know them all.

Any single word of the 192,111 can send a player as deep down a linguistic rabbit hole as she would like to go, through thick layers of definition, history, culture, immigration, war, conquest, colonization, appropriation, derivation, coinage, conjugation, translation, pronunciation, and selection. As the great player Marlon Hill once said about learning the Scrabble words’ definitions, “If you are sane at all, it will drive you slowly insane.”

As the great player Marlon Hill once said about learning the Scrabble words’ definitions, “If you are sane at all, it will drive you slowly insane.”

To play the game well you needn’t learn the definitions, of course, and success in the competitive game of Scrabble has nothing to do with one’s everyday working vocabulary. Its best players tend not to be poets or English professors but, rather, computer programmers, mathematicians, musicians, and the otherwise technically inclined. These are the sort of people who can easily retain coded information and quickly turn it into ordered meaning. A number of the world’s best English-​language players come from Thailand and barely speak English. And recall that the world’s best English-​language player won the French-​language championship without speaking French.

Most players study with the help of a computer program; Zyzzyva (“The Last Word in Word Study”) is the most popular. These digital flash cards display letters in alphabetical order—​that is, as an alphagram. During gameplay one does the same with the letters on the rack, tightening the connection to earlier study. For example, the program might display AAEFLMOT. Your job, then, is to try to mentally rearrange those letters into the word MEATLOAF. Or if it displayed AAGKNOOR, you’d try to find KANGAROO. AEIKRSTW becomes WATERSKI, ADELOPT becomes TADPOLE, DGMOPRU becomes GUMDROP, ABINORW becomes RAINBOW, and so on. Do this successfully a couple hundred thousand times and you’re on your way to becoming a strong tournament Scrabble player.

Once your brain is attuned to anagrams, you start seeing them everywhere. When I see “New York,” my brain rearranges it into WONKERY. The “Hamptons” become PHANTOMS. A street sign reading “right lane” becomes EARTHLING.

In 2007, a player named César Del Solar created the website Aerolith—​part study tool and part daily online competition. A player arrives at the site and selects a “word wall.” The screen fills with fifty alphagrams—​AGMNORU, ILSSTTU, EEEKLNX, and so on—​which a player must “clear” by typing in the unscrambled words. The pace is swift. To succeed you have to solve an alphagram about every five seconds. Top players can clear their boards much faster. A leaderboard displays that day’s top performers; its Hall of Fame is a who’s who of the competitive Scrabble world. I have spent many hours on Aerolith. Once your brain is attuned to anagrams, you start seeing them everywhere. When I see “New York,” my brain rearranges it into WONKERY. The “Hamptons” become PHANTOMS. A street sign reading “right lane” becomes EARTHLING.

Marlon Hill’s warning of insanity aside, learning the definitions, even cursorily, of some two hundred thousand words is an enlightening and democratizing experience. There is approximately no thing or concept in the universe that will escape you if you read through the Scrabble dictionary, and each thing and concept is presented on equal terms.

I delighted in the serendipity of the word study, but the more compelling driver of my obsession was that Scrabble was a respite—​an escape, really—​from the stressors of grad school and the real world. Scrabble study is meditative, in a sort of Buddhist sense, and cheaper than therapy. It was fun to play at a high level. I met good friends at the club and won a small tournament or two. I began to climb the ranks, but my ego became tied up in the game. My mood swung on the outcome of each contest, which is heavily subject to chance, what with the letters emerging randomly from the bag—​sometimes you draw AERST and sometimes IUUWV. I lacked both the detachment of Nigel Richards and the faith of Marion Tinsley. My ranking plateaued at around 200th in the country. Studying became a chore. I stopped caring about the difference between MARKA and MARAKA. In 2013, I graduated, moved to a new city, and quit the game. My modest Scrabble prowess, such as it was, became nothing more than a reliable cocktail party anecdote. 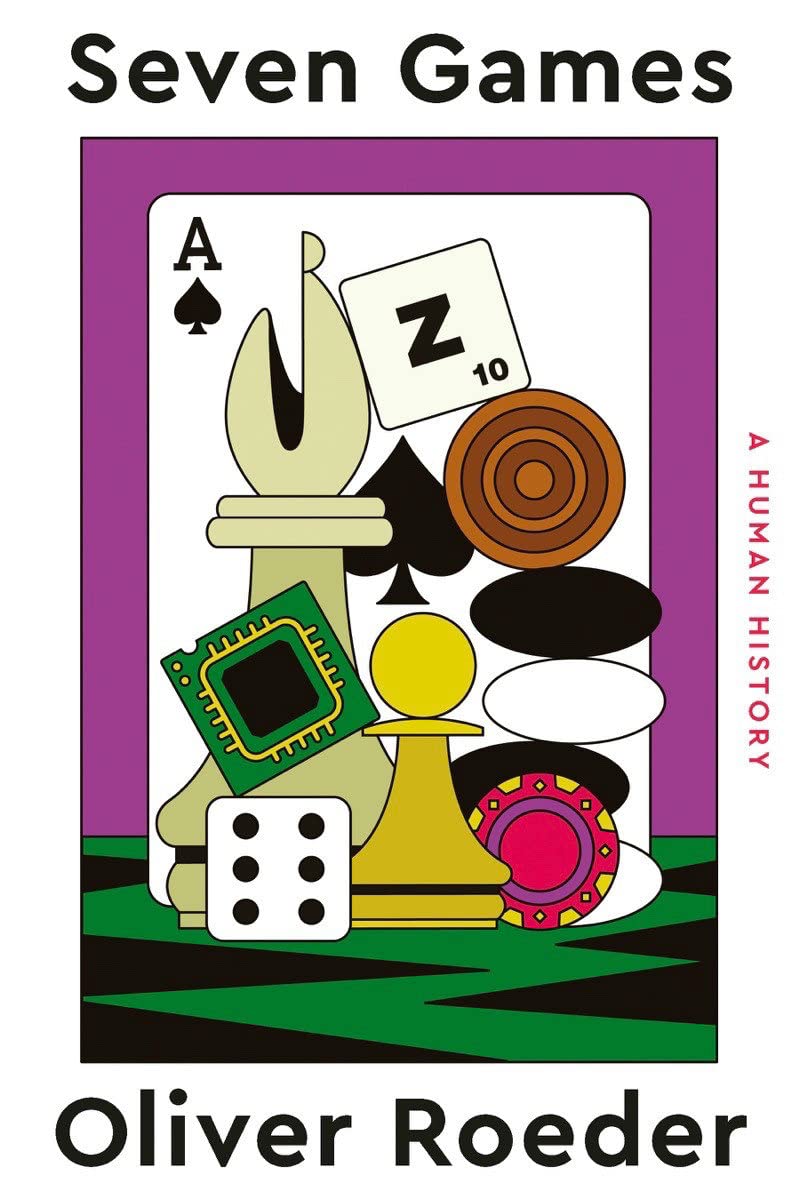 Excerpted with permission of the publisher from Oliver Roeder’s SEVEN GAMES, now available from Norton.