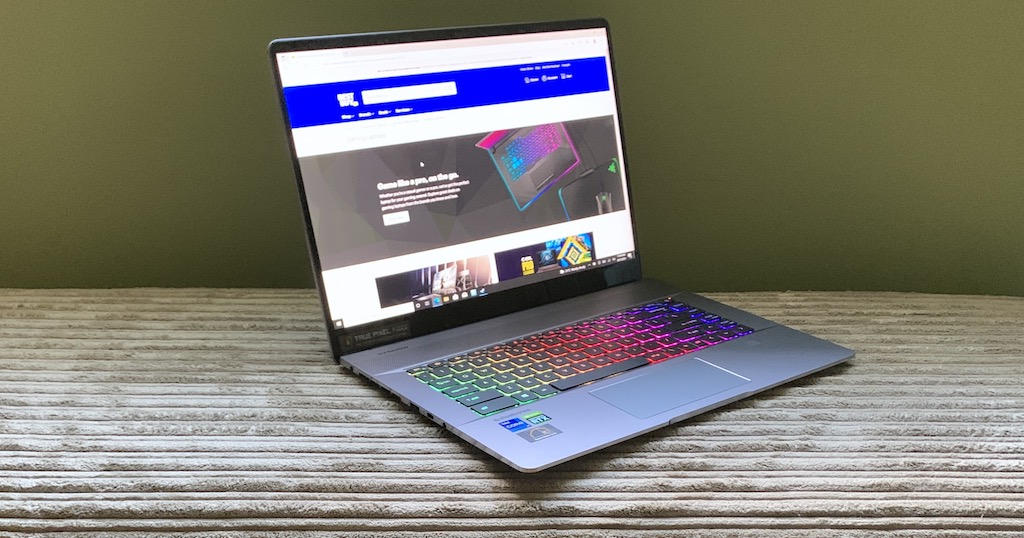 PC manufacturer MSI is known for releasing some killer gaming laptops. Like the MSI G66 Stealth gaming laptop reviewed last November by Dave Neufeld. The new MSI Creator Z16 is something different for the company. It’s an ultra-powerful laptop, equipped with an 11th generation Intel processor and an NVIDIA RTX 30 series mobile processors. It’s a veery capable gaming laptop, but the Creator Z16 is actually aimed squarely at creators—thus the name. Reflecting this, its TruePixel display is unusual for a gaming laptop, with a 16:10 aspect ratio, multitouch support, and factory-calibrated colour accuracy. The Creator Z16 also features a thin, sophisticated design with an aluminum case.

The Creator Z16 is a large laptop, but still manages to pull off looking sleek and sophisticated. Its case is Lunar Gray aluminum with brilliant, precision-machined edges. The MSI dragon logo is subtly embossed in silver on the lid, and the keyboard (more on that shortly) glows in RGB colour. At its thickest, the laptop is just 1.63 cm. 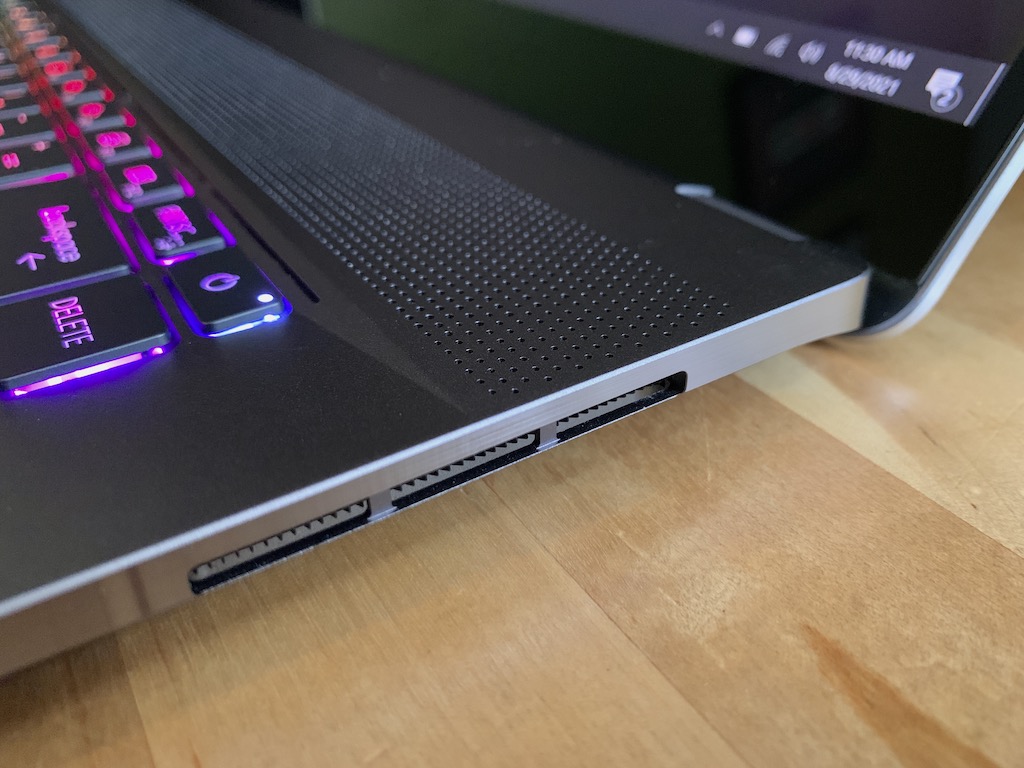 For a 16-inch laptop, it looks very sleek. Besides the logo and the keyboard, nothing really gives it away as being a gaming-capable laptop. That’s intentional and part of the strategy to appeal to the design crowd. MSI describes the approach as “aesthetics in design.”

Pick it up and you instantly realize this is no “lightweight” laptop that’s all flash and no power. It weighs 2.30 kg (5.07) pounds. The accompanying power supply is 180W, which gives you a pretty good clue about what’s inside — my own laptop uses a 60W power supply … 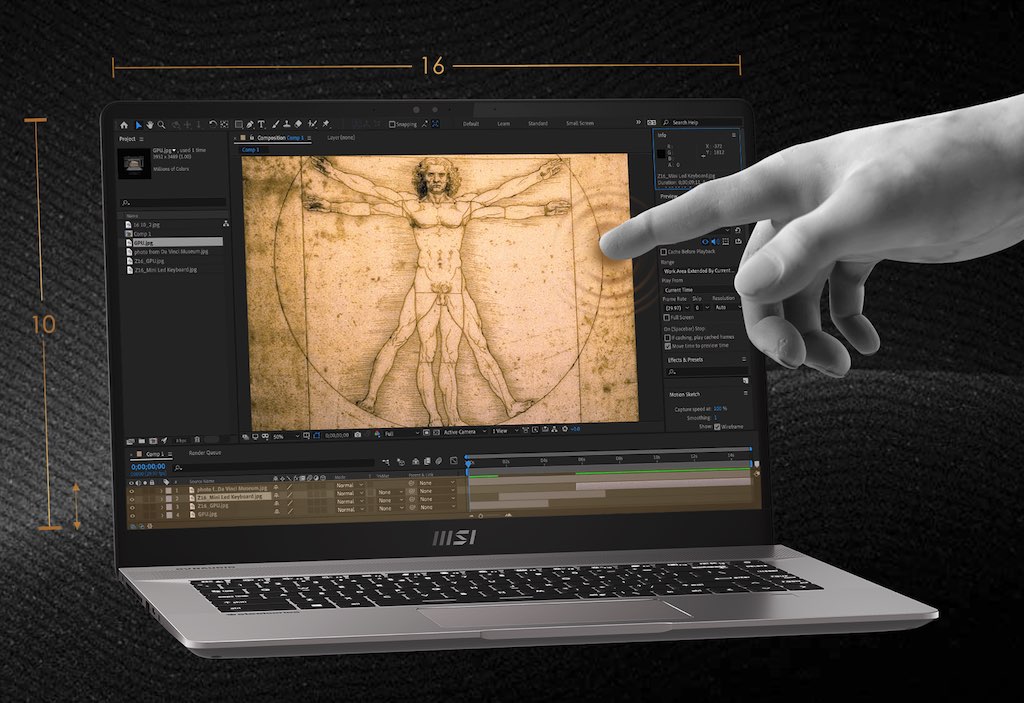 Opening the lid of this laptop, the keyboard immediately grabbed my attention. Again, more on that shortly. Once I got past that, the star of the show quickly became its 16-inch display.

Gaming laptops are typically equipped with 16:9 aspect ratio display. The Creator Z16 has a 16:10 panel, an aspect ratio that MSI compares to the “Golden Ratio.” What this means in practical terms is a display that’s “taller” and able to display several more lines of content without scrolling. That amounts to 11% more onscreen if you are a creator.

If you are a gamer or watch a lot of streaming video, that might mean some thin black bars at the top and bottom of a window.

While I’m sure it will provide a compelling canvas for image or video editing, the Creator Z16’s display was also a video streaming and gaming showcase.

When it comes to performance, it should come as no surprise this laptop is a screamer. An 11th generation octa-core Intel Core i7 CPU and an NVIDIA RTX 3060 mobile graphics card makes for a potent combination. CyberPunk 2077 was buttery smooth with Ray Tracing at “ultra.” With 32GB of RAM and 1TB of NVMe storage, It should perform just as well (if not better) with content creation applications. 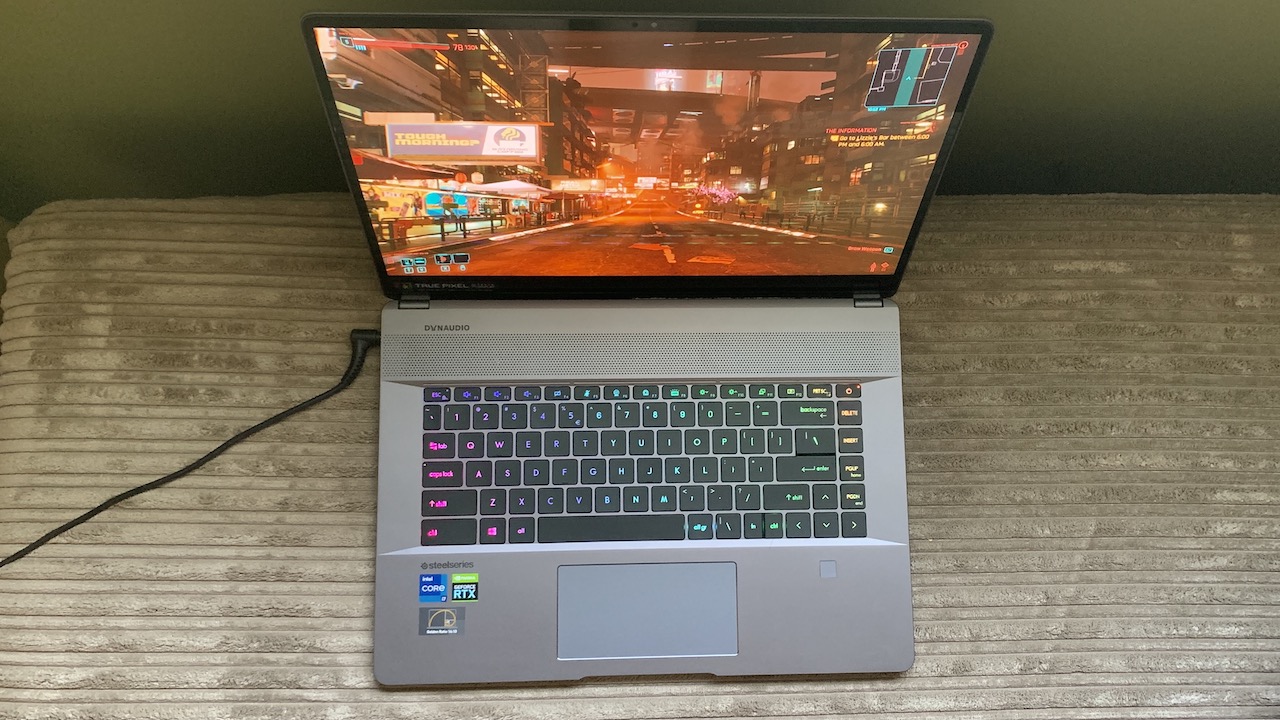 The laptop even has Wi-Fi 6E support, a next-gen standard that has yet to come to Canada (learn more about Wi-Fi 6E here).

I have to mention that the combination of pushing the performance envelope and a very thin form factor makes for a serious cooling challenge. MSI equipped with Creator Z16 with an advanced Cooler Boost Trinity+ cooling system with three fans, and five heat pipes. Those fan blades are just 0.1mm thick, which makes them the world’s thinnest. 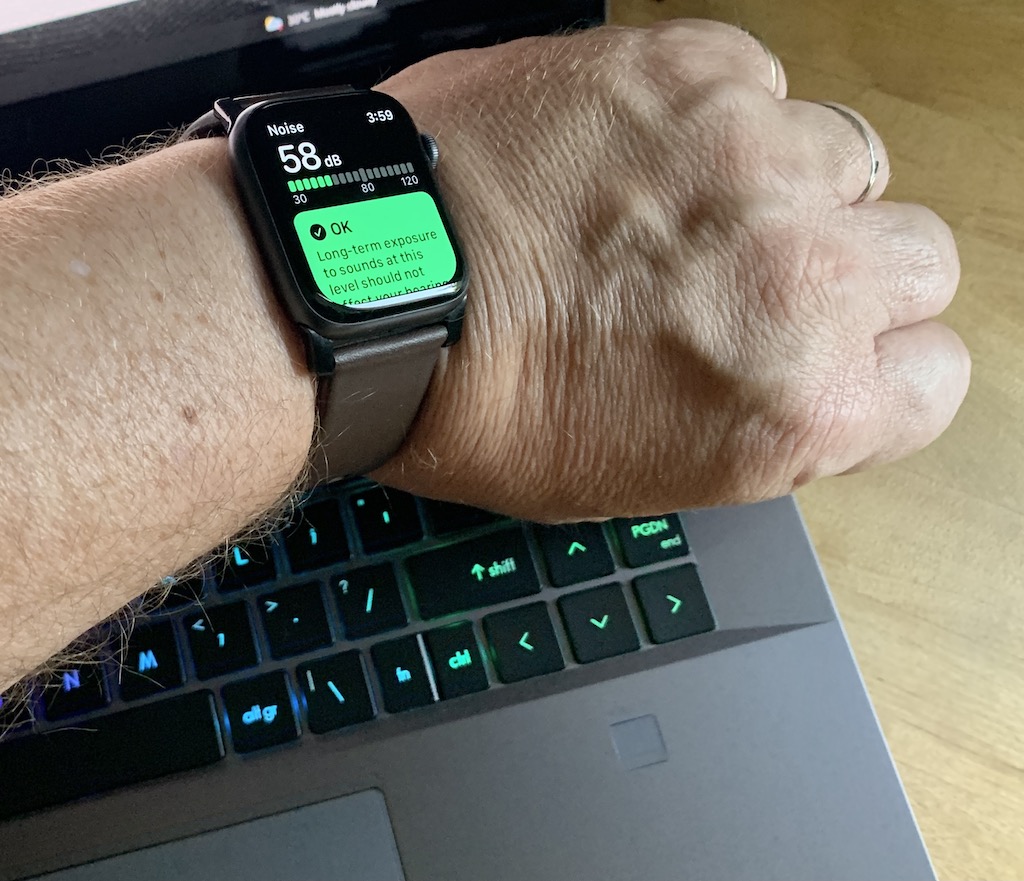 However, 10 minutes of CyberPunk 2077 rendered the bottom of the laptop too hot to be anywhere near a lap. Anything that caused temperatures to rise would see the fans start up. When installing a system update I measured the fan noise. It went from 33dB to 62dB, which is starting to get up there and is roughly equivalent to the noise an air conditioner makes. 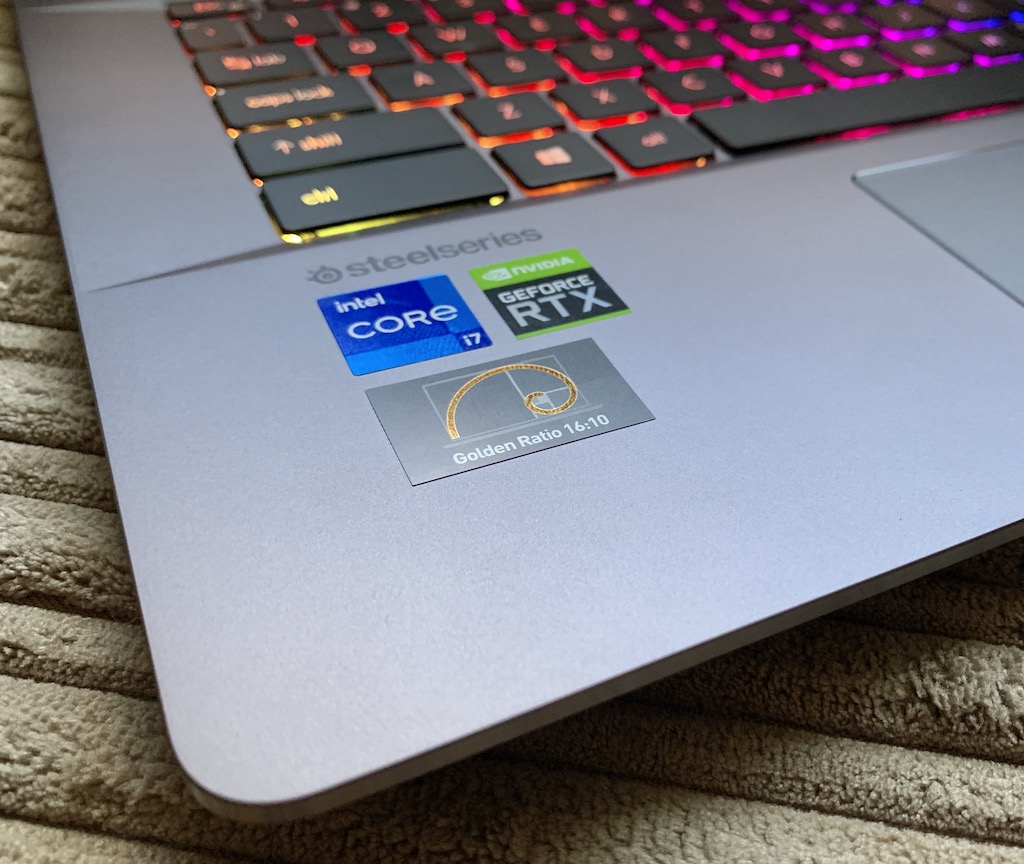 The fans aren’t blowing all the time and when they are, they’re not always at full speed, but heat (and noise from cooling) is something to be away of.

If you want to upgrade the RAM it can be done, but it’s a bit of a project. There are the usual Phillips screws on the case bottom (two hidden under bumpers). The battery needs to be removed, then the motherboard has to be disconnected and removed to access the DIMM slots which are located on the opposite side.

Finally, one of my favourite things about this laptop. It’s the first to be equipped with a MiniLED backlit keyboard. The MiniLED technology allows for incredibly subtle colour gradients that makes other RGB backlit keyboards look pixelated in comparison. It is incredibly eye-catching. 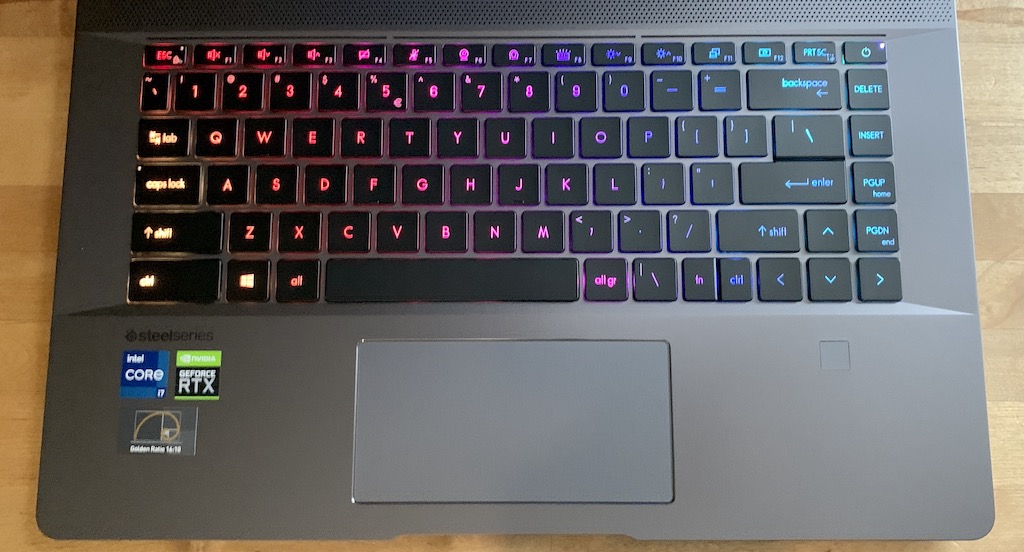 Plenty of ports, but no Ethernet or HDMI

As you would expect for a laptop aimed at creators, the MISI Creator Z16 is packed with ports. Legacy USB accessories are covered with a pair of high-speed USB Type-A ports. There is also a Micro SD card slot.

Two ports that are usually included in a gaming laptop are missing: Ethernet and HDMI. However, with a pair of Thunderbolt 4 USB-C ports, you can use dongles to connect to virtually anything, including Ethernet and external UltraHD displays. 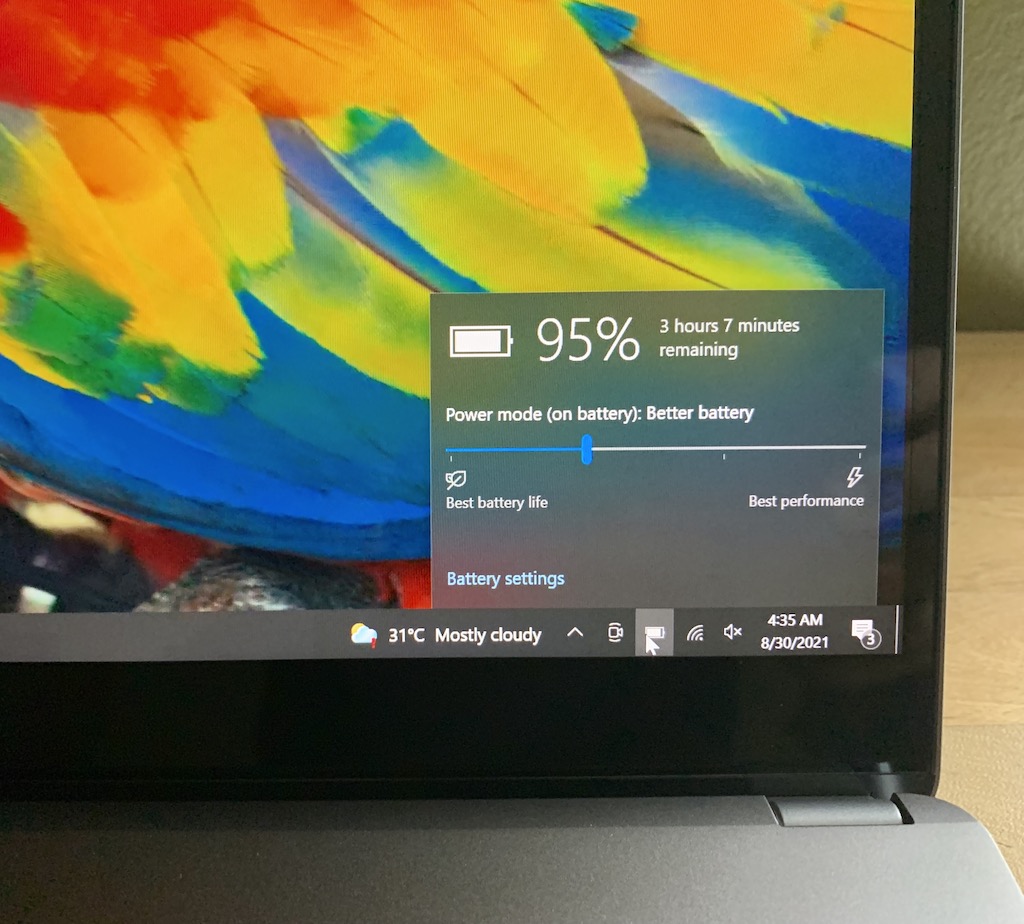 Battery life is never going to be a strong suit in a big laptop with this kind of performance. That big, 16-inch QHD+ IPS display doesn’t help matters. MSI equipped it with a 90Wh battery top help out. Streaming 18080p video with power mode at the “better battery” setting, I averaged about 5.5 hours of battery life. That could have been stretch a little further by dimming the screen and being more aggressive with the power settings. Conversely, high-demand use like gaming cuts the battery life substantially.

Battery life is good enough to take the Creator Z16 to a meeting, but to do any work on it (or to play games), you’re going to want to keep the power adapter handy.

Who is the MSI Creator Z16 for?

I think MSI has done a very nice job of creating a high-performance laptop that will appeal to creators. It is perhaps the perfect laptop for creators who are gamers, or style-conscious gamers.

The Creator Z16 offers enviable performance, along with a brilliant display—and a very nice keyboard. Plus all the ports a creator might need.

However, this laptop also has the specs to appeal to PC gamers who want something more stylish and subtle than most gaming laptops.

Whichever camp you fall under—and it may well be both—just be prepared for some fan noise if you push it at all, and keep that power adapter near.