The Loft
directed by Eric Van Looy
"If you don't like my loving woman, you sure don't have to stall/Cause I can get more pretty women than a passenger train can haul!" 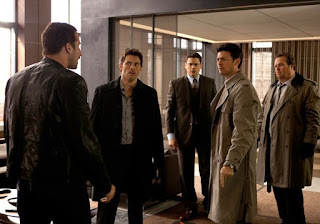 It tries to be a little smarter than such films but only briefly succeeds. The film can't rise above what I thought was a silly premise and a few wooden acting performances. It was a little fun until the melodrama became terminal, resulting in an ending that saw all involved competing to chew up the scenery.

As recent revelations about certain couples' private lives have shown, you never know what's going on behind closed doors. Certain people aren't meant for monogamy though they may otherwise be great spouses.
Some people would say that it's by definition impossible to be a good spouse, let alone a great one, if you can't devote yourself to one person, forsaking all others. It's in the freaking wedding vows, for goodness sakes. Some think that providing a stable lifestyle for the children and the spouse is all that anyone can expect, especially once the initial infatuation has disappeared. Some would forgive their spouse his or her (non-public) trespasses. Others wouldn't forgive a single doggone thing. 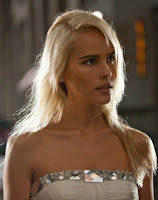 If their special rider steps out he or she better keep on walking and never come back. Other husbands or wives don't ask what their spouse gets up to on long business trips or overseas assignments. And their spouse certainly doesn't tell.

The Loft asks you to imagine that five successful upper middle class men decide that they are going to cheat on their wives.

Well that's putting it the wrong way, I think. Rather they decide to continue cheating on their wives. Phil Williams (Matthias Schoenaerts) is a pugnacious and volatile man who has somehow convinced his boss's daughter to marry him.

Phil's in the real estate development business so he might end up inheriting millions as a result of this marriage. This is not a possibility which has escaped Phil's notice. Ain't love grand? Phil's four friends are his groomsmen. 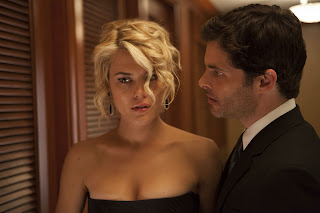 Vince is a Mephistopheles. He either knows or assumes that all of his friends are busy doing the do with women not their wives. He certainly is. Well people slip up don't they?

Rushed assignations in hotel rooms with the resulting unexplained credit card charges or "tips" to "professional" women can leave clues for suspicious wives or dogged private investigators. And no one wants to deal with that sort of nonsense. Divorce and child support can be costly.

Vince doesn't think men of their obvious status should have to worry about such things. Vince has a solution. In the new building he's designed he's got a nice condo with everything a man might need to get his needs met with whatever women he so chooses.
If his buddies buy in for equal shares, they all get a key. And then they can use the condo anytime they want-with arranged schedules of course. It's a slightly more upscale version of the times you returned to your college dorm room only to find your roommate had hung a "do not disturb" sign or its equivalent on the doorknob.

Now, if I were doing dirty deeds I'd want to keep that knowledge limited to me, myself, and I. Neither would I want to be rolling and tumbling in the same bed or room my friends used. But these men think differently.

They all buy into the concept and take a key, even newly married Phil, and Chris, who claims that he's just supporting his buddies and has no intent of using the condo. Flash forward a year.
One morning Luke arrives at the condo to find a beautiful dead woman (Isabel Lucas) in the bed. Well that will just ruin your day won't it. Luke calls everyone to the scene so that they can decide what to do. Either one of them is a murderer or someone is setting them up. How did the woman get into the loft? Who knows her? Who doesn't have their key? Obviously none of the men appreciate being called to a murder scene.

Through flashbacks and forward jumps in time we learn more about these men and their various relationships with each other and the women in their lives. Alliances will be made and broken; lies will be told and discovered. Once the cops (Robert Wisdom, Kristin Lehman) get involved the stakes are raised considerably. As Chris's wife, Rhona Mitra is underused. Actually all the women playing wives are underused. I enjoyed the whodunnit aspect. But the film's ending was over the top. The Loft has the glossy look of the Whirry/Tweed films I referenced though surprisingly there is less nudity than one might expect. TRAILER