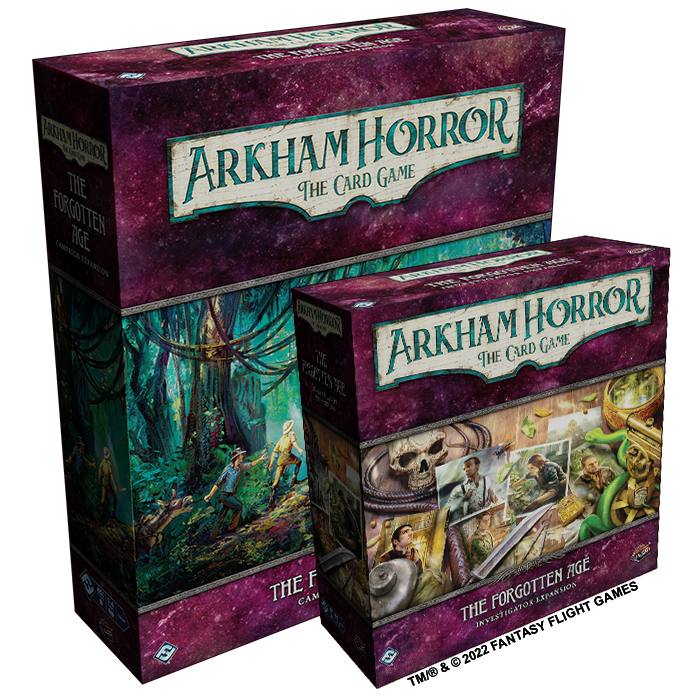 “Once more I ventured within those brooding ruins that swelled beneath the sand…” – H.P. Lovecraft, “The Nameless City”

We think we know the history of the Earth, but there are secrets that lie beyond our ken and truths that threaten to undo our understanding of the universe. When renowned historian Alejandro Vela discovers one of these secrets—the ruins of an ancient and forgotten Aztec city—it sets into motion a plot that could unravel the very fabric of time itself.

Fantasy Flight Games is thrilled to announce The Forgotten Age, the next pair of repackaged expansions for Arkham Horror: The Card Game!

Return to the third cycle of content for Arkham Horror LCG with The Forgotten Age Investigator Expansion and The Forgotten Age Campaign Expansion. Just like with the previous cycles, all player cards for this cycle can be found within the Investigator Expansion while all campaign- and scenario-related cards can be found in the Campaign Expansion. This is a fantastic opportunity for new fans of the game to experience its third full-length campaign, and for longtime fans to catch up on any parts they may have missed. Whether you want just one of the expansions or both, no Arkham LCG fan will want to miss out on The Forgotten Age!

Note: Any longtime fans of Arkham Horror: The Card Game who already own everything from the original The Forgotten Age cycle will not find any new cards or content within these two expansions. 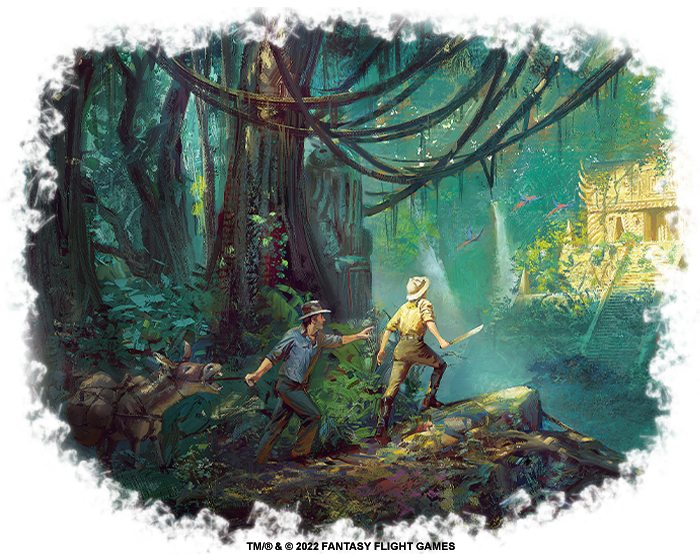 To help you succeed in your dangerous expedition, The Forgotten Age Investigator Expansion comes with a skilled group of five playable investigators to aid you in your journey. 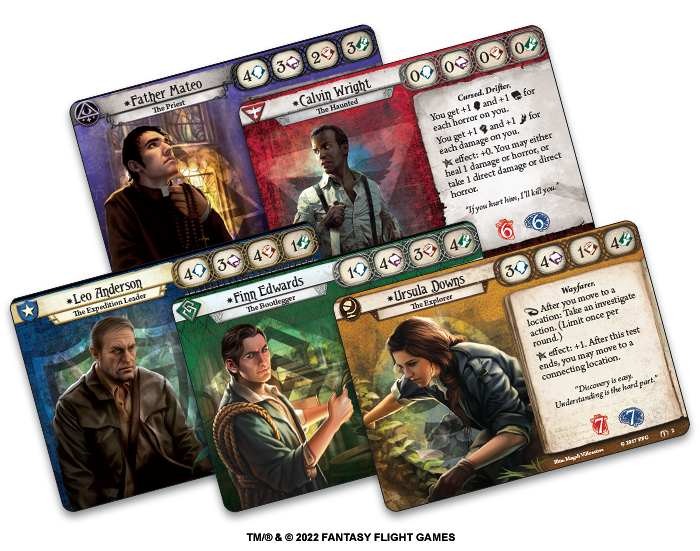 As always, each investigator has their own strengths and weaknesses, and they can contribute to any campaign—not just The Forgotten Age’s campaign. 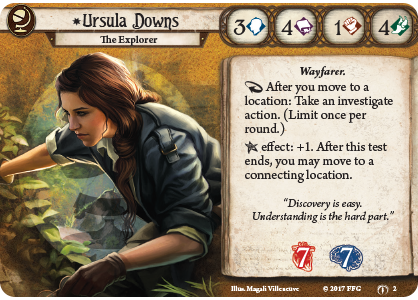 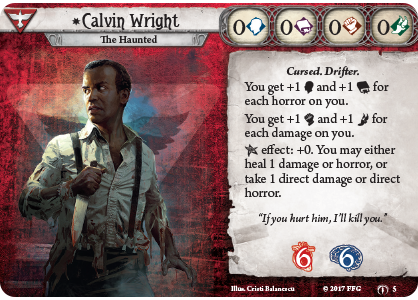 Even if you have little interest in the investigators of the Investigator Expansion, there is still plenty to enjoy with the thrilling story of The Forgotten Age Campaign Expansion! 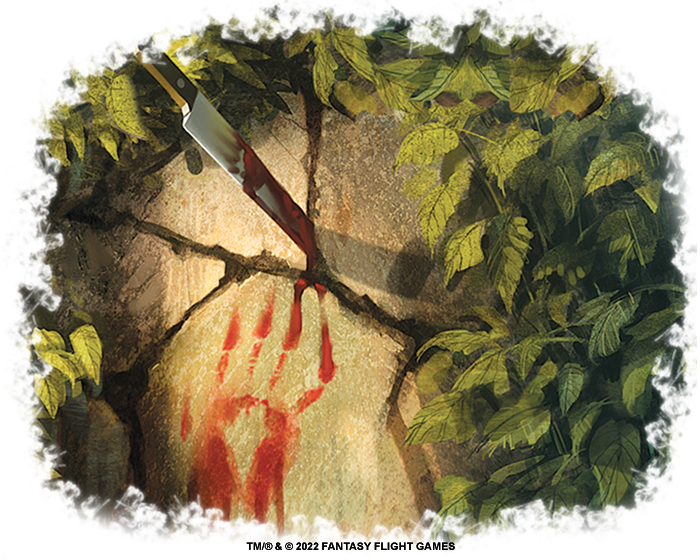 In this campaign, you and your fellow investigators join distinguished historian Alejandro Vela in an expedition to find the ruins of a forgotten Aztec city. You begin the campaign by gathering supplies before diving into the untamed wilds, with the supplies you choose to bring with you affecting various things later in the campaign. 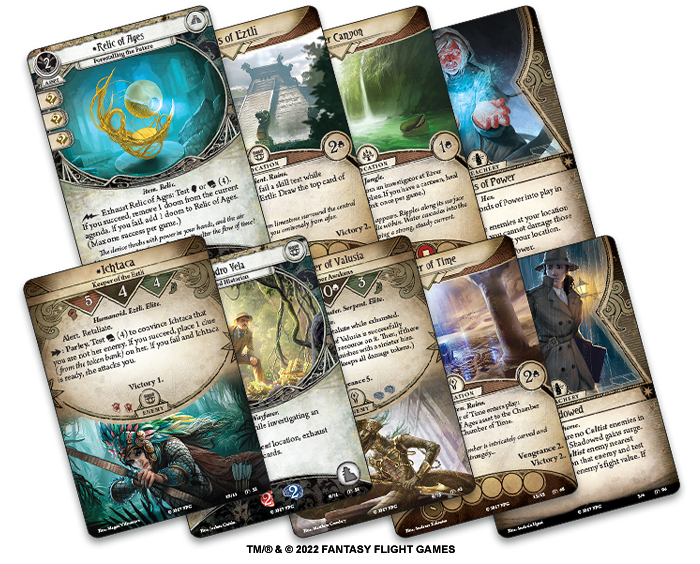 Of course, no expedition of this sort is entirely safe, and this one in particular is fraught with its own unique dangers. Throughout your adventure, you will encounter enemies, such as the Pit Viper (The Forgotten Age Campaign Expansion, 78), that have the “Vengeance X” keyword. Similar to Victory X, these enemies are placed in the victory display after being defeated; however, unlike Victory X, cards with Vengeance X do not benefit the investigators when defeated. Instead, as more and more “vengeance points” are accumulated over the course of the campaign, your party will incur the wrath of a vicious being that will seek to punish you in increasingly brutal ways. You’ll have to think on your feet and know when to fight—and when not to—in order to survive.

All eight scenarios from the original The Forgotten Age campaign are included in this Campaign Expansion, with all the depths and dangers that come with them. With enough determination, curiosity, and sheer dumb luck, you and your fellow investigators may yet be able to discover the lost secrets of the jungle and come out alive. Do you think you’re up to the challenge? 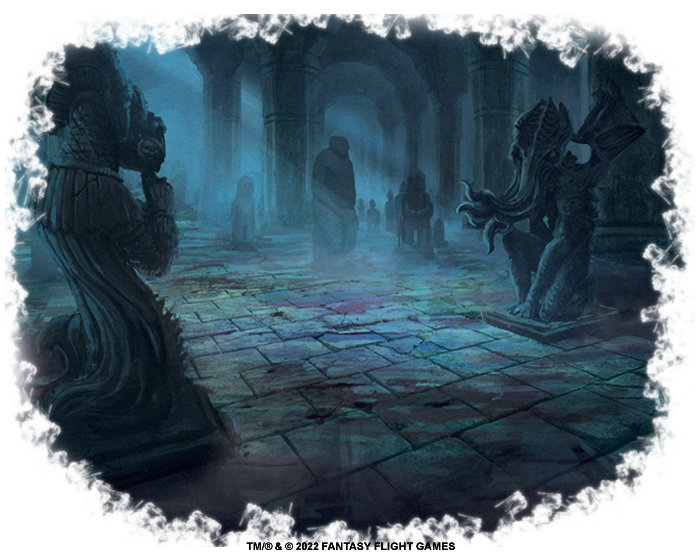 With the irresistible call of long-forgotten ruins and a mysterious history lost to time, only you and your fellow investigators can discover these long-buried secrets that could change our understanding of everything we know. Whether you missed the original run of The Forgotten Age or are just now getting into Arkham Horror: The Card Game, you can look forward to adding The Forgotten Age Investigator Expansion and The Forgotten Age Campaign Expansion to your collection when they release in February and March respectively!

Discuss this article
in our forums!