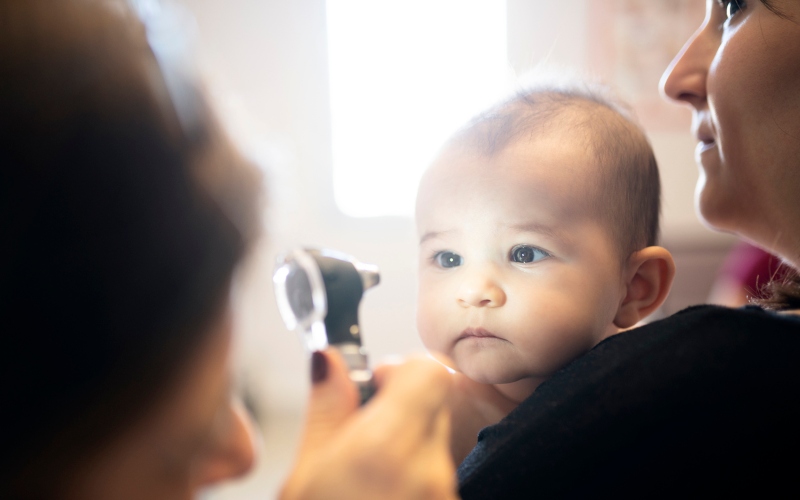 A mum and dad are urging other parents to look out for the tell-tale signs of eye cancer after their 14-month-old son lost his eye through retinoblastoma, a rare eye cancer that typically affects children under the age of six.

Dad Tom Pughe-Morgan, from Brighton, spotted an unusual white glow in his then eight-month-old son Elijah’s eye – a common sign of eye cancer which is often only seen in certain light.

Mum Annabel Byrne said, “Tom first spotted the white glow in the Summer of 2020. Later, I took a video of Elijah climbing up the stairs and Tom said, ‘There’s the white glow I’ve been talking about. I’m worried because I can see it really clearly’”.

The parents were unaware of the signs and symptoms of retinoblastoma, and findings from a recent *survey on behalf of the Childhood Eye Cancer Trust found that only 19% of parents surveyed felt they knew the symptoms of the cancer, and a decline in parents being concerned about their child’s eyes.

Annabel said, “I saw a TikTok video of influencer Jarrett Stod removing his artificial eye and explaining that he’d had retinoblastoma. You never think something like that will happen to your child”.

Elijah with a white glow

In January 2021, a month after seeing the TikTok video, Annabel had the sudden urge to find her old Polaroid camera.

Annabel explained, “I was so keen to find it, I was going crazy as I just really wanted the camera to work. I rushed to get the last film in the shop and then rushed out again when I realised it needed batteries. Everyone in my house was looking at me like ‘What’s going on?’”.

“The first photo I took on the Polaroid you could see the white glow in Elijah’s pupil so clearly, and although Tom had told me that he had seen a glow, I didn’t realise something was wrong until then. The white glow really alarmed me because it was so clear and everything else in the picture was so dark apart from the glow, and after talking to a family friend, I took Elijah to hospital the next day.”

The polaroid photo that prompted the hospital trip

“Elijah looked up at me as he ran around the ward and I could see his eye glow in the light. When the doctor examined him, he said, ‘I’m really sorry, but I think your son has retinoblastoma’. He explained that someone from the children’s ward would see him ASAP. I calmly replied ‘Ok, lovely thank you’, because I didn’t know what retinoblastoma was.”

It wasn’t until the specialist The Sussex Eye Hospital mentioned about Elijah going to Great Ormond Street Hospital for Children (GOSH) that Annabel realised the severity of the situation.

Annabel explained, “I remember the word ‘cancer’ and that’s it. I just felt so numb and floppy and had to leave. My whole world stopped; I couldn’t even process it. I rang Tom and said, ‘Elijah has cancer’ – he didn’t believe me at first but then immediately left work to come to the hospital. I was holding onto my 14-month-old boy who hadn’t a clue, smiling away. I was his comfort and I needed to step up. It was by far the hardest moment I’ve had to deal with, and I had to keep our family together and strong.”

Annabel adds, “We both felt so bad. I felt bad for not listening for the past six months and Tom felt bad for not doing anything, but we didn’t even mention it. We knew that he was being seen now and that’s all that mattered.”

Two days later, on the 6th January 2021, the family went to Moorfields Eye Hospital where Elijah was diagnosed with retinoblastoma. Elijah’s MRI revealed that the cancer luckily hadn’t spread outside of his eye, but the parents were faced with the decision of either Elijah having chemotherapy, or having his eye removed.

Elijah with his mum, Annabel

Annabel explains, “If Elijah had gone through chemotherapy there was a chance he would still need his eye removed or the cancer spreading. While parents who choose chemotherapy are so strong, Tom and I looked at each other and we just knew that having his eye removed was the right thing to do for Elijah.”

The morning of Elijah’s operation at the Royal London Hospital on the 13th January 2021, Annabel felt emotional and tried to hold back the tears.

Elijah in hospital with his dad, Tom

Annabel said, “I’d never been so scared when we went to collect him – I scooped him up and didn’t want to let go. Tom and I are both very grateful for each other, we were each other’s backbone.”

“The day after the operation, Elijah was happier but wanted lots of cuddles – he bounced back to normal within a week. He was given an artificial eye – which he is amazing with! Elijah is now at an age where he is aware and likes to play with it. When I catch him, he always giggles because he knows he’s being cheeky. We have a box of all the artificial eyes he’s had so far; he loves looking through them and explaining they are his ‘old eyes’. It’s so nice to see him be that way.”

Elijah after his operation

After Elijah had his eye removed, he attended an event hosted by influencer Olivia Deane, who had also had retinoblastoma.

Annabel explained, “Olivia is an inspiration; she gave me that spark of confidence to not care what people think. I wanted to come across as a strong mum and not care about other’s opinions, but I did care. You just want to protect your children at all costs, and you don’t want people saying nasty things. My confidence around it is definitely growing.”

Olivia Deane with Elijah at her awareness event

Elijah now gets seen for a check-up at the Royal London Hospital every six months, but he was able to ring the bell for being cancer-free on the 4th January 2022 – exactly a year after he received his diagnosis.

Annabel said, “Tom and I were thrilled because it’s such a lovely thing to do, especially as it was a year anniversary. We helped him ring it and it was a lovely atmosphere.”

“Elijah is the most amazing, funniest, bravest, cheekiest, gorgeous, polite little boy! He loves animals, being outside and horse riding. As he has one eye you just want to protect it, but I don’t wrap him up in cotton wool. I want him to go out and be himself. I believe he can do anything a child with two eyes can do.”

Elijah and his dad, Tom

In a message to other parents, Annabel said, “Trust your gut. If you’re worried, book a doctor’s appointment. It’s a few hours out your day that could save your child’s life.”

The Childhood Eye Cancer Trust (CHECT) are urging parents and healthcare professionals to be aware of the most common possible symptoms of eye cancer – a white glow in the eye in flash photo or other certain lighting conditions and a squint.

Patrick Tonks, Chief Executive of CHECT said: “Retinoblastoma is rare, with around one baby or young child being diagnosed in the UK each week. Symptoms can be quite subtle, and children often seem well in themselves which can make it hard to diagnose. In just under half of all cases, such as in Elijah’s case, a child has to have an eye removed as part of their treatment.”

Patrick adds, “We are extremely grateful that in Elijah’s case, his symptoms were recognised, and A&E made an urgent referral so that he could undergo treatment.”

Annabel explained, “I’m so happy Ash chose to do this for CHECT as they’ve helped our family hugely – not only financially, but mentally, and offering help whenever it was needed. Thank you Ash”

“We also want to thank all the health professionals who helped with diagnosing and treating Elijah”.

For more information on the signs, symptoms, and treatment of retinoblastoma, please visit chect.org.uk.

The Childhood Eye Cancer Trust (CHECT) is a UK charity dedicated to helping people affected by retinoblastoma. It:

Retinoblastoma is a rare and aggressive form of eye cancer that affects babies and young children, mainly under the age of six. Around 50 cases are diagnosed a year in the UK – or one child a week. It represents 3% of all childhood cancers and 10% of cancers in babies under the age of one in the UK.

Around 98% of children survive retinoblastoma in the UK but early diagnosis is crucial in order to save a child’s eyes, sight and life. The most common symptoms are a white glow in a child’s eye or pupil in dim lighting or when a photo is taken using a flash, and a squint.

CHECT has been a registered charity since 1987 and was formerly known as the Retinoblastoma Society.

*1,026 parents took part in the online survey, conducted by MMR Research Worldwide in January 2022. All parents had at least one child aged between 0-6 years

For more information on CHECT or retinoblastoma (also known as Rb), including signs and symptoms, diagnosis and treatment options, please visit www.chect.org.uk.

The post “A Polaroid Picture Helped Reveal the Eye Cancer That Cost Our Son His Eye” appeared first on The Good Men Project.