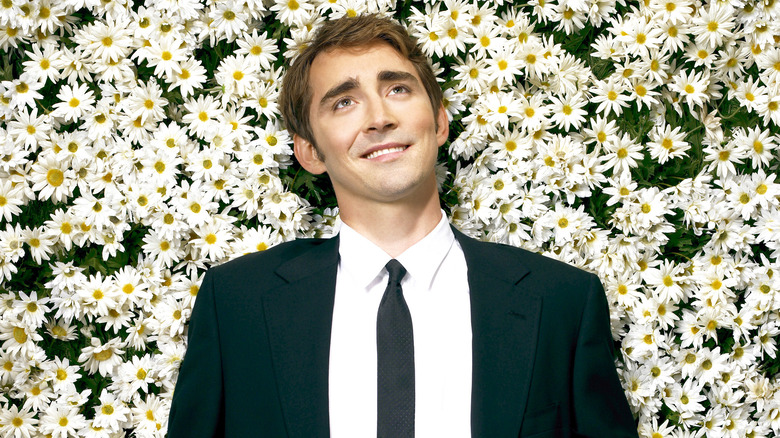 (Welcome to TV, Interrupted, a series where the /Film team remembers, eulogizes, and makes a case for the revival of TV shows we loved that were canceled far too soon.)

"Pushing Daisies" suffered from the same "problem" as other equally complex movies and TV series — it was hard to market. Now, historically speaking, we know that this wasn't its only problem, or rather this wasn't the only issue that led to it being prematurely canceled. But this bittersweet comedy series grappled with complex and potentially morose material in a manner both whimsical and hilarious, without sacrificing an ounce of sincerity.

"Pushing Daisies" is about Ned, the pie-maker (Lee Pace). He owns and operates the aptly named Pie Hole diner where he makes ... well, pies. But Ned has a secret that only two people — well, one person and one dog — know about: With a single touch, he can make the dead alive again. With a second touch, they're dead forever.  And if they stay alive again for longer than a minute, something or someone else within a certain proximity and of an approximately equal size or "life value" has to take their place.

Ned learned all of this in the most complex and painful of ways. When he was nine years, 27 weeks, six days, and three minutes old, his dog, Digby, was hit by a truck. He gently brushed Digby's fur, bringing the pooch back to life. Later that day, while Ned's mom was baking a pie, she suffered an aneurysm and died instantly. Curious what would happen, he gently touched her left cheek and she sprang back to life, thinking she'd just slipped and fallen. After a minute of being alive again, their neighbor Charles Charles (Josh Randall) dropped dead on his front lawn.

Charles' daughter, Charlotte "Chuck" Charles (Anna Friel), was Ned's best friend and first love -- and he'd just accidentally (and unwittingly) killed her father. Flash forward 19 years, 34 weeks, one day, and 59 minutes. Ned runs the Pie Hole with Olive Snook (played by the truly iconic Kristin Chenoweth), and tries to lead a normal life. That is, until private investigator Emerson Cod (the outstanding Chi McBride) accidentally chases a perp off a roof. The criminal dies instantly, but bumps into the pie-maker, exposing Ned's unique talents. Emerson and Ned become partners who solve murders together in order to collect the reward.

Then everything changes when Chuck comes back into Ned's life after being murdered.

Why Pushing Daisies Was Great 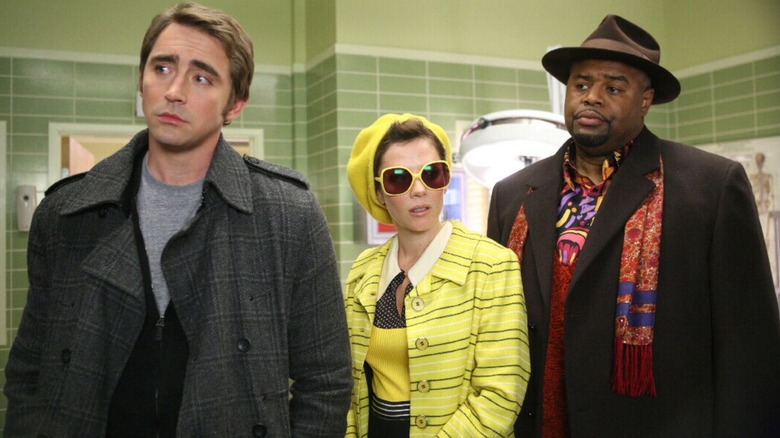 "Pushing Daisies" was great for a myriad of reasons almost as complex and detailed as the first 20 minutes of the pilot episode (aptly named "Pie-lette"). It blended genres without a second thought, combining murder mystery, romance, and comedy with specific thriller and horror elements. It periodically crosses into musical territory (when you have the great Kristin Chenoweth in your cast, you make use of her gifts!) while also being profoundly campy and loaded with pastiche.

Series creator Bryan Fuller ("Hannibal," "Dead Like Me," "American Gods") imbued the fanciful show with countless stylistic references, most prominently Jean-Pierre Jeunet's "Amélie." The fast, sweeping camera movements coupled with vivid color palettes, eccentric characters, and blunt-yet-beautiful narration (by none other than Jim Dale) navigated the morose subject matter with a wink and a hug. It was maximalist television at its finest, and a perfect example of Fuller's fearlessly queer sensibiity.

"Pushing Daisies" is also episodic in nature, playing off of the same surefire formula that worked wonders for "Star Trek: The Original Series" and "The Next Generation." Where those shows had a different adventure each week, "Pushing Daisies" had another murder to solve. It's no surprise that Fuller adopted this style, specifically in reference to "Star Trek," since he worked on both "Star Trek: Deep Space Nine" and "Star Trek: Voyager," along with helping to create "Star Trek: Discovery."

The general rule of thumb about screenplays is one page per minute of screentime. "Pushing Daisies" was an approximately 42–45 minute show, yet in season 1 specifically, its screenplays ranged in length from 56 pages to over 60. Like Amy Sherman-Palladino's "Gilmore Girls" before it, this gave the show a unique voice and pace that became one of its many calling cards.

All of this together was perfectly bundled together by the main plot that ran through the entire series: Ned and Chuck's relationship. It prominently featured complex themes like the near-universal fear of rejection and intimacy experienced by Ned, Chuck, Emerson, and Olive alike, concepts of mortality, nostalgia, and desire, the fear of being alone or losing those you love, and what it means to truly live.

Why Pushing Daisies Was Canceled 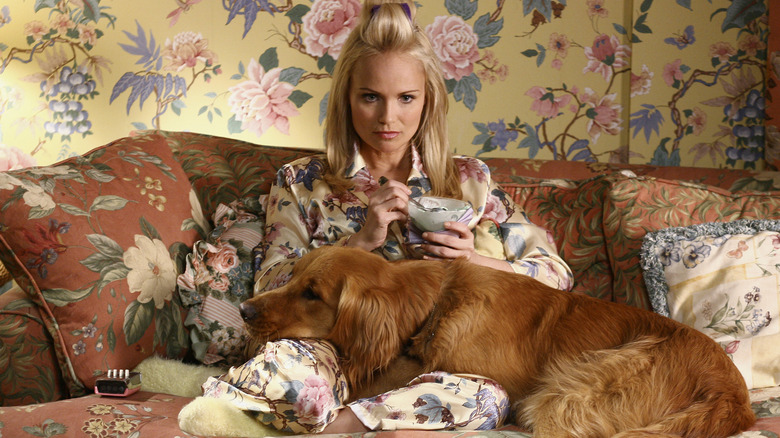 The reasons are many, and none of them have to do with the quality of the show. "Pushing Daisies" was and remains a shining moment in television history for a reason.

For one, Fuller struggled a lot with the network's (ABC) ideas of family-friendly content. While the show seems uncompromising in its Fuller-ness, the reality is that getting "Pushing Daisies" made depended on compromise. In an interview with Variety, Fuller explained, "We couldn't even pass a message to Paul Reubens through the sewer because it was deemed disgusting by an ABC exec." He had to prove that "Pushing Daisies" wasn't too weird to play in the same sandbox as other prime-time series like "The Big Bang Theory," which also debuted that year.

Remember when I mentioned the script lengths? Well, I'm convinced that played a role in things, too. See, the scripts for the first season ranged from 59–60+ pages, but season 2 was ... different. Very few of the scripts for the second season exceed 52 pages. This also ties in with my mention of "Gilmore Girls." Also a 45-minute series, their scripts ranged from 70 to over 80 pages in length, which is how they got that incredible pace and tone. After the WB merger led to the creation of The CW, "Gilmore Girls" was invited to stay, but the network wouldn't agree to Amy Sherman-Palladino and her husband and collaborator Daniel Palladino's terms, so they left the series ahead of its seventh and final season -- and it showed. Scripts were shorter, but still aimed for that Gilmore speed only to wind up tripping over itself in the Palladinos' absence.

Something similar can be said of "Pushing Daisies." The Writers Guild of America strike from late 2007 to 2008 really hurt the series, putting almost a year between the season 1 finale and the season 2 premiere, leading to an understandable dip in ratings. The shortened scripts feel like an attempt by the network to make the show more palatable to the audiences that might tune in to, say, "The Big Bang Theory," even though "Pushing Daisies" was never that kind of show. Director Barry Sonnenfeld actively attributes the show's cancellation to both the strike and the scripts, saying that they were "too cute" and needed "more plot" in an interview with the Huffington Post.

On November 20, 2008, The Hollywood Reporter announced that "Pushing Daisies" hadn't been renewed beyond its already agreed upon 13-episode second season. It hadn't been officially canceled, as the network actively avoided "the c-word," as THR put it. But it didn't look good. 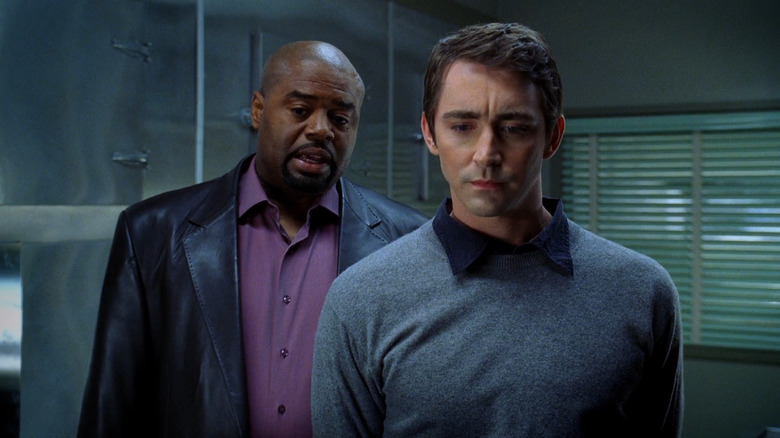 "Pushing Daisies" season 2 was originally supposed to end on a cliffhanger, according to Entertainment Weekly's Michael Ausiello. Since the series hadn't officially been canceled, there was still hope that ABC might pick it up for a full season. With that in mind, Bryan Fuller and his team held out hope that they could leave things as they were originally, but still possibly have more time to wrap everything up.

Time came and went, and "Pushing Daisies" never got its renewal -- but nor did it get canceled. Ausiello was repeatedly asked for good news about the series, and only had this to say in response:

"Stop begging and start organizing a campaign, because we're running out of time. In just a few short weeks, 'Daisies' will complete its 13-episode order, and if ABC doesn't order more scripts, like, soon, we're crap out of luck."

Fuller was even planning on releasing the original ending with the season's DVD release, but couldn't make any moves until ABC made up its mind about whether or not it would even both airing the last three episodes. Eventually, it turned out that Fuller was able to add on a new opening and conclusion to what would become the series finale in order to tie up all the loose ends.

The episodes were broadcast, and the last episode did, indeed, tie everything up in a neat little bow. The problem was that it wasn't given any room to breathe. We had answers to our questions, so very little was left unsaid, but the answers were provided in a hurry so they felt less than satisfactory. Even so, like the rest of the series, the finale packs a punch and always leaves me crying. (Though, admittedly, that may be in part because I hate that we were robbed of more "Pushing Daisies.")

Will Pushing Daisies Ever Return? 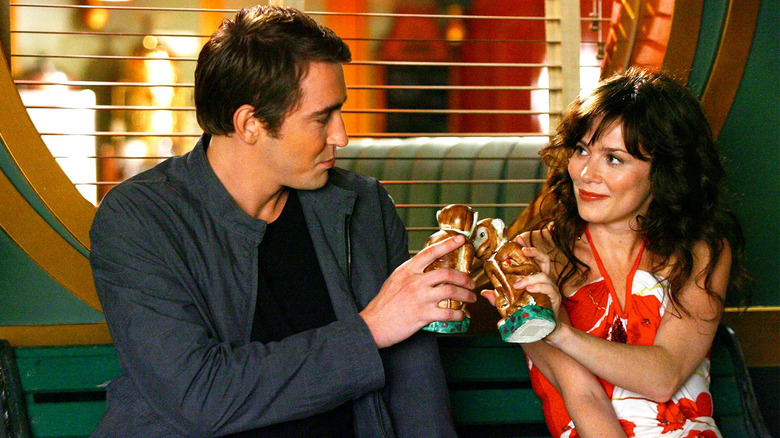 The only answer I can give is who knows? It's really anyone's guess at this point. Fuller would love nothing more than to return to "Pushing Daisies," and he's said so in just about every single interview he's done about the show since it's cancellation. Kristin Chenoweth, Anna Friel, and Lee Pace have all confirmed that the entire cast would love to return for another season, a Broadway musical, or even a movie. But nothing has happened on that front in any concrete way. It was even in the works as a comic book series at one point, but that never saw the light of day.

Regardless of whether or not it will come back, fans would welcome a revival in any medium with open arms and a bear hug.

In an interview with Variety, Fuller described "Pushing Daisies" as "perhaps the purest expression of my creativity, as derivative as it is." That much is and has always been clear from the moment Digby died, to the look on Lily and Vivian's faces when they see Chuck alive again. "It's full of things that make me happy as an artist," he said in the interview. "So when anyone appreciates the show, they're appreciating me."

To love "Pushing Daisies" is to love what makes Bryan Fuller such a remarkable creative mind: fearless, unadulterated, and unapologetic joy paired with an eagerness to explore the complex things that make us human with a sense of magic and wonder.

Read this next: The 15 Best Anthology TV Series Ranked