One of my favorite things about the board gaming hobby is the way games explore such a wide array of concepts, themes, and genres. The constraint of abstraction that is necessary to reduce a situation into something that can be clearly articulated on the table breeds a fascinating array of results. For longtime tabletop enthusiasts, much of the joy of a new game is discovering the way the designers and artists have crafted something that "feels" like the concept or activity the game presents, whether that idea is Lovecraftian monsters or bird-watching.

This week, we're looking at a sphere of board gaming that rarely gets attention – the sports board game. In this case, the game at hand is Counter Attack, a wonderful project that captures much of the excitement and tactical thrill of soccer. And to offer the thoughtful perspective on the game that it deserves, my colleague Matthew Kato stepped in to check out the game, and offer his take as a guest columnist. He's had many years of experience with an array of sports video games, and because we're played board games together as well, I knew he'd have something meaningful to share about exploring this meeting point between sports and tabletop fun.

Here's what Matthew Kato had to say about Counter Attack. 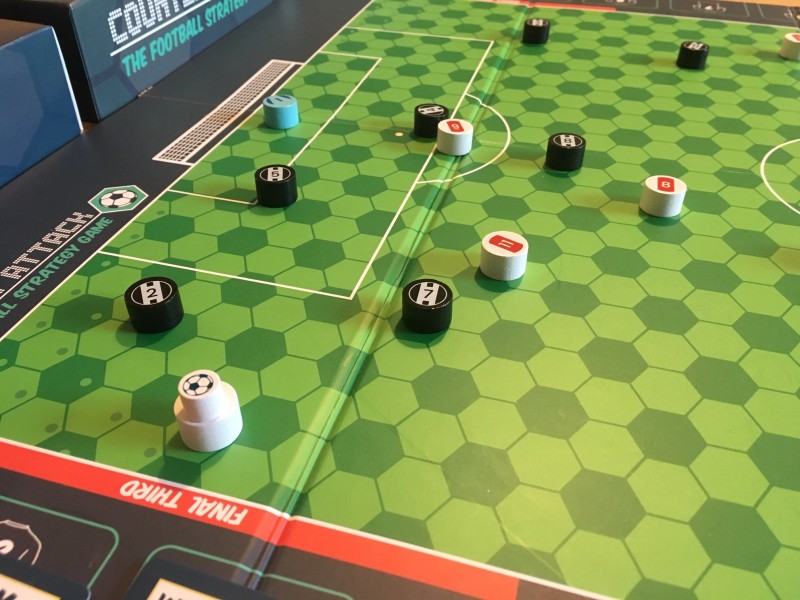 In soccer video games like Football Manager, the A.I.’s execution of your tactics can make you feel like a helpless bystander. You’re never really sure if your instructions are being carried out correctly by the CPU. Counter Attack, a Kickstarted project by Colin Webster and Rachel Codd, is a two-player soccer strategy board game that puts you in control of your team’s tactics, letting you faithfully execute your plans while still highlighting the individual prowess of a star striker making an improbable strike for a glory-filled goal.

Gameplay is hex-based, with players’ movements, shots, pass lengths, and other actions governed by hex distances. How many hexes a player can move is defined by their pace attribute, but shots and passes, for instance, are calculated by a handy custom ruler called the Distance Stick, which lets you accurately determine the path and distance of the ball. From here you can see if the ball might be intercepted, whether it’s a clear shot on goal, and more.

One-on-one situations are resolved by each player rolling a single die and adding their appropriate skill values to the role. Whomever is higher wins that situation. So, a corner kick into the box might come down to the keeper’s aerial skill versus the header skill of his opponent. There are modifiers on top of this, such as for injuries or rolls of a 1 automatically resulting in shots on goal missing completely, for example, but it’s all easy to figure out. Refs can even impact a game since each of the four refs included has a different level of leniency in how they book players for fouls. 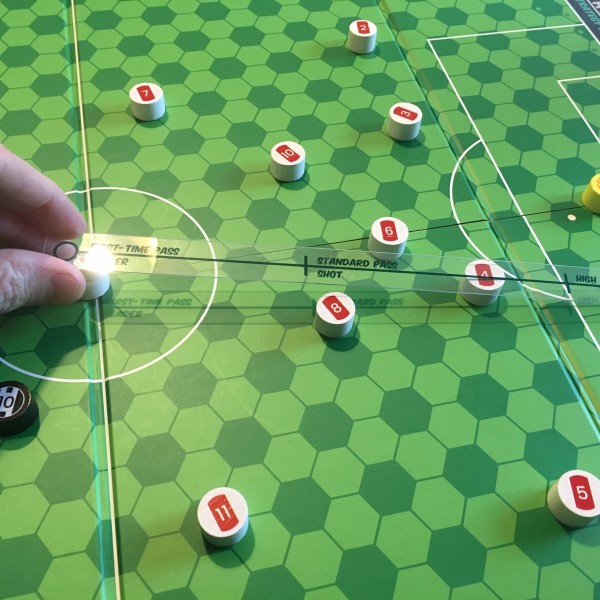 The Distance Stick in action

The straightforward nature of the gameplay leaves room for the complexity of your own tactics. If you want to dynamically change your team’s shape during play you can do that. If you want to emulate a particular formation or tactic – whether they are focused on ball possession, movements of specific players, counter-attacking, launching long balls into the channels, etc., you can do that, too.

Key to turning your ideas into wins is seeing the pitch in its entirety, thinking in advance of the possibilities for your players as well as those of your opponent. Taking actions isn’t based on back-and-forth turns. Instead, whomever possesses the ball performs a specified range of actions until they lose the ball. For example, If you perform a standard pass, your next action can only be to move your players, perform a riskier first-time pass, or take a quick snapshot on goal.

While you’re performing these actions your opponent can also move and react to what you’re doing, so player positioning and matchups are always changing, giving you new things to consider. Keep an eye on the defensive compactness of your players so gaps can’t be exploited. Understand where open space is so you can use it. Make sure your players support each other so your player with the ball has options. All regular soccer tactics stuff. I once made a one-hex miscalculation with my defender that allowed a high pass to be played into space behind him to a pacey striker. Just like real life, in a flash I was down a goal. 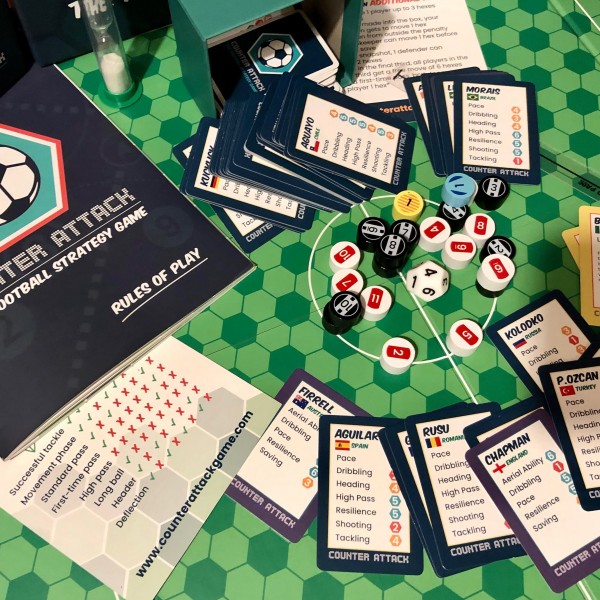 Although the action on the board is very fluid, the pace of play itself is slower and deliberate as players consider all their options. The game includes sand timers you can use to limit the amount of time spent on each decision, and I think it’ll take players a little while to become comfortable enough with the game and their decisions before fitting into the stated 90-minute runtime – the length of a normal football match.

Another tactical layer is knowing the attributes of your own players as well as those of your opponent so you know what they’re capable of and how they can be utilized and exploited. At the beginning of the game, teams are constructed semi-randomly, and the player cards in the box are a mix of different fictional names and nationalities, so you can bond with your squad. The players on the pitch are represented by wooden markers screenprinted in team colors with numbers, and additional markers approximating real-world league and international sides can be purchased through the game’s website (which also has an FAQ and more).

Overall, the game's materials are well made. The hard, fold-out board is large enough you can place your player cards along its border, and the set comes with two teams, the sand timers, a rules manual, quick-play reminder cards, dice, various gameplay markers, two Distance Sticks, and a box for the player cards. 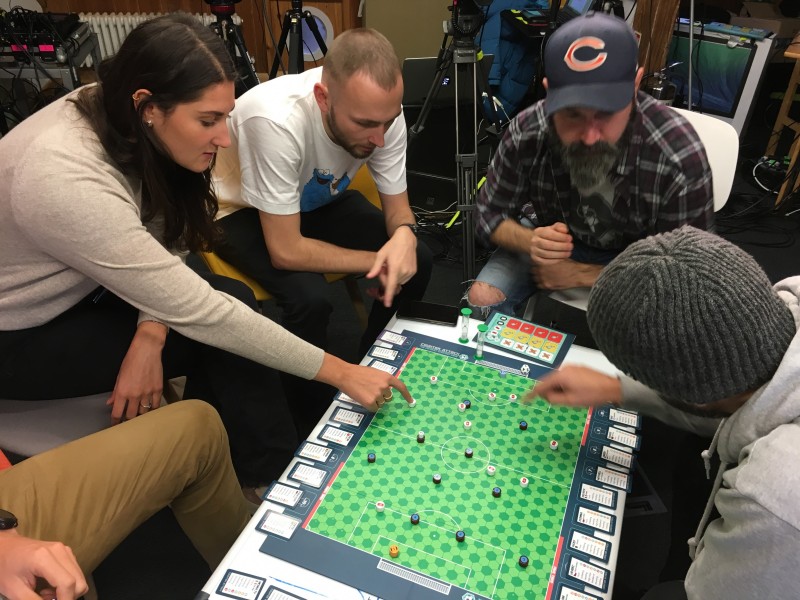 Apart from possibly ordering new makers representing your favorite team, one of Counter Attack’s great customization options is how its simple framework allows for custom user modifications. You can easily create your own players, setup a league structure, and add and modify rules as you see fit. The game is for two players, but it can be played online or even solo.

Counter Attack is hex-based and strategic, but it’s also incredibly fluid like real football. It challenges you to think both short- and longterm as you try to get individual players – with their own strengths and weaknesses – to effectively play in your tactical framework against an opponent simultaneously executing their own strategies. Now you can be a manager and not just be relegated to standing on the touchline gesturing frantically and yelling at your players in vain.

A big thank you to Matthew Kato for stepping up to bring his sports expertise to this week's column.

If soccer isn't what you're looking for out of your next board game night, worry not. We've got a wealth of additional recommendations available over at the Top of the Table hub, which you can reach from the banner below. And as always, if you'd like a personal recommendation for your next board, card, miniature, or role-playing game, drop me a line and I'll be happy to offer up some ideas.