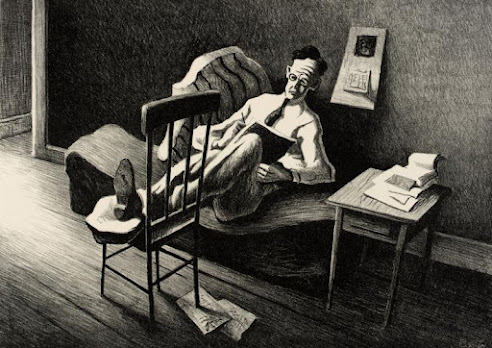 The Poet
by William Somerset Maugham

I am not much interested in the celebrated and I have never had patience with the passion that afflicts so many to shake hands with the great ones of the earth.

When it is proposed to me to meet some person distinguished above his fellows by his rank or his attainments, I seek for a civil excuse that may enable me to avoid the honour; and when my friend Diego Torre suggested giving me an introduction to Santa Aña I declined. But for once the excuse I made was sincere; Santa Aña was not only a great poet but also a romantic figure and it would have amused me to see in his decrepitude a man whose adventures (in Spain at least) were legendary; but I knew that he was old and ill and I could not believe that it would be anything but a nuisance to him to meet a stranger and a foreigner. Calisto de Santa Aña was the last descendant of the Grand School; in a world unsympathetic to Byronism he had led a Byronic existence and he had narrated his hazardous life in a series of poems that had brought him a fame unknown to his contemporaries. I am no judge of their value, for I read them first when I was three-and-twenty and then was enraptured by them; they had a passion, a heroic arrogance and a multi-coloured vitality that swept me off my feet, and to this day, so intermingled are those ringing lines and haunting cadences with the charming memories of my youth, I cannot read them without a beating heart. I am inclined to think that Calisto de Santa Aña deserves the reputation he enjoys among the Spanish-speaking peoples. In those days his verses were on the lips of all young men and my friends would talk to me endlessly of his wild ways, his vehement speeches (for he was a politician as well as a poet), his incisive wit and his amours. He was a rebel and sometimes an outlaw, daring and adventurous; but above all he was a lover. We knew all about his passion for this great actress or that divine singer--had we not read till we knew them by heart the burning sonnets in which he described his love, his anguish and his wrath?--and we were aware that an infanta of Spain, the proudest descendant of the Bourbons, having yielded to his entreaties, had taken the veil when he ceased to love her. When the Philips, her royal ancestors, tired of a mistress she entered a convent, for it was unfitting that one whom the King had loved should be loved by another, and was not Calisto de Santa Aña greater than any earthly king? We applauded the lady's romantic gesture; it was creditable to her and flattering to our poet.

But all this took place many years ago and for a quarter of a century Don Calisto, disdainfully withdrawing from a world that had nothing more to offer, had lived in seclusion in his native town of Ecija. It was when I announced my intention of going there (I had been spending a week or two in Seville) not because of him, but because it is a charming little Andalusian town with associations that endear it to me, that Diego Torre offered me this introduction. It appeared that Don Calisto allowed the younger men of letters occasionally to visit him and now and then would talk to them with the fire that had electrified his hearers in the great days of his prime.

"Have you a photograph of him?"

"I wish I had. He has refused to face the camera since he was thirty-five. He says he does not wish posterity to know him other than young."

I confess that I found this suggestion of vanity not a little touching. I knew that in early manhood he was of extraordinary beauty, and that moving sonnet of his written when he grew conscious that youth had for ever left him shows with what a bitter and sardonic pang he must have watched the passing of those looks that had been so fantastically admired.

But I refused my friend's offer; I was quite satisfied to read once more the poems I had known so well and for the rest I preferred to wander about the silent and sunswept streets of Ecija in freedom. It was with some consternation therefore that on the evening of my arrival I received a note from the great man himself. Diego Torre had written to him of my visit, he said, and it would give him great pleasure if I would call on him at eleven next morning. In the circumstances there was nothing for me to do but to present myself at his house at the appointed hour.

My hotel was in the Plaza and on that spring morning it was animated, but as soon as I left it I might have walked in a deserted city. The streets, the tortuous white streets, were empty but for a woman in black now and then who returned with measured steps from her devotions. Ecija is a town of churches and you can seldom go far without seeing a crumbling façade or a tower in which storks have built their nests. Once I paused to watch a string of little donkeys pass by. Their red caparisons were faded and they carried I know not what in their panniers. But Ecija has been a place of consequence in its day and many of these white houses have gateways of stone surmounted by imposing coats of arms, for to this remote spot flowed the riches of the New World and adventurers who had gathered wealth in the Americas spent here their declining years. It was in one of these houses that Don Calisto lived and as I stood at the reja after pulling the bell, I was pleased to think that he lived in such a fitting style. There was a dilapidated grandeur about the massive gateway that suited my impression of the flamboyant poet. Though I heard the bell peal through the house no one answered it and I rang a second and then a third time: at last an old woman with a heavy moustache, came to the gate.

She had fine black eyes, but a sullen look, and I supposed that it was she who took care of the old man. I gave her my card.

"I have an appointment with your master."

She opened the iron gateway and bade me enter. Asking me to wait she left me and went upstairs. The patio was pleasantly cool after the street. Its proportions were noble and you surmised that it had been built by some follower of the conquistadores; but the paint was tarnished, the tiles on the floor broken, and here and there great flakes of plaster had fallen away. There was about everything an air of poverty but not of squalor. I knew that Don Calisto was poor. Money had come to him easily at times but he had never attached any importance to it and had spent it profusely. It was plain that he lived now in a penury that he disdained to notice. In the middle of the patio was a table with a rocking-chair on each side of it, and on the table newspapers a fortnight old. I wondered what dreams occupied his fancy as he sat there on the warm summer nights, smoking cigarettes. On the walls under the colonnade were Spanish pictures, dark and bad, and here and there stood an ancient dusty bargueño and on it a mended lustre plate. By the side of a door hung a pair of old pistols, and I had a pleasant fancy that they were the weapons he had used when in the most celebrated of his many duels, for the sake of Pepa Montañez the dancer (now, I suppose, a toothless and raddled hag), he had killed the Duke of Dos Hermanos.

The scene, with its associations which i vaguely divined, so aptly fitted the romantic poet that I was overcome by the spirit of the place. Its noble indigence surrounded him with a glory as great as the magnificence of his youth; in him too there was the spirit of the old conquistadores, and it was becoming that he should finish his famous life in that ruined and magnificent house. Thus surely should a poet live and die. I had arrived cool enough and even somewhat bored at the prospect of my meeting, but now I began to grow a trifle nervous. I lit a cigarette. I had come at the time appointed and wondered what detained the old man. The silence was strangely disturbing. Ghosts of the past thronged the silent patio and an age dead and gone gained a sort of shadowy life for me. The men of that day had a passion and a wildness of spirit that are gone out of the world for ever. We are no longer capable of their reckless deeds or their theatrical heroics.

I heard a sound and my heart beat quickly. I was excited now and when at last! saw him coming slowly down the stairs I caught my breath. He held my card in his hand. He was a tall old man and exceedingly thin, with a skin the colour of old ivory; his hair was abundant and white, but his bushy eyebrows were dark still; they made his great eyes flash with a more sombre fire. It was wonderful that at his age those black eyes should still preserve their brilliance. His nose was aquiline, his mouth close-set. His unsmiling eyes rested on me as he approached and there was in them a look of cool appraisal. He was dressed in black and in one hand held a broad-brimmed hat. There was in his bearing assurance and dignity. He was as I should have wished him to be and as I watched him I understood how he had swayed men's minds and touched their hearts. He was every inch a poet.

He had reached the patio and came slowly towards me. He had really the eyes of an eagle. It seemed to a tremendous moment, for there he stood, the heir of the great old Spanish poets, the magnificent Herrera, the nostalgic and moving Fray Luis, Juan de la Cruz, the mystic, and the crabbed and obscure Gongora. He was the last of that long line and he trod in their steps not unworthily. Strangely in my heart sang the lovely and tender song which is the most famous of Don Calisto's lyrics.

I was abashed. It was fortunate for me that I had prepared beforehand the phrase with which I meant to greet him.

"It is a wonderful honour, Maestro, for a foreigner such as I to make the acquaintance of so great a poet."

A flicker of amusement passed through those piercing eyes and a smile for an instant curved the lines of that stern mouth.

"I am not a poet, Señor, but a bristle merchant. You have made a mistake, Don Calisto lives next door."

I had come to the wrong house.