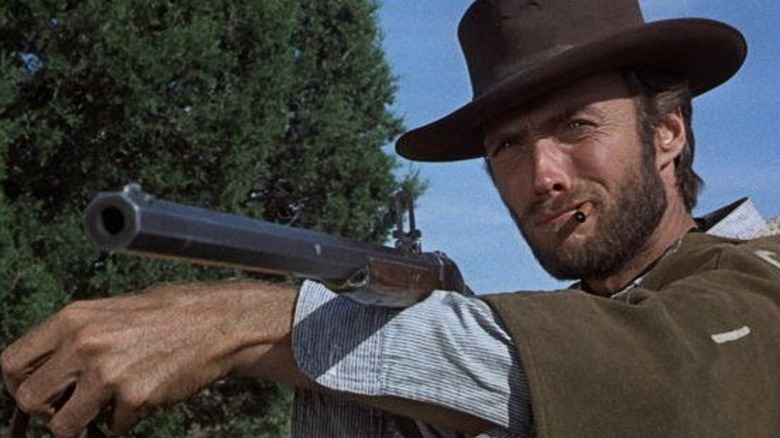 "The Good, the Bad, and the Ugly" defines the spaghetti Western as a genre, an epic tale of betrayal and greed that paints the American frontier through Italian lenses as a place of unforgiving violence. The ending of the film, which centers on the iconic Mexican standoff, became so famously re-enacted and parodied that it may seem cliché to current audiences. But the sequence deserves close analysis to understand how and why it's considered such a masterpiece of filmmaking that has been emulated and spoofed for decades.

Director Sergio Leone's style reflected his flair for the dramatic. His productions often had a mix of languages on set, and the Italian director communicated with his English-speaking actors through a translator. No matter these complications, it was Leone's visual dialect that reigned supreme, such as extreme close-ups contrasting with majestic landscape vistas. The sprawling fields and rugged hills of the West created a space where law was seldom present and men worked out their differences through gun duels. Leone often focused on sweaty eyes surveying their surroundings, danger always a lurking threat. There is perhaps no better example of this intensity than the operatic climax of "The Good, the Bad, and the Ugly."

What Happened In The Good, The Bad, And The Ugly? 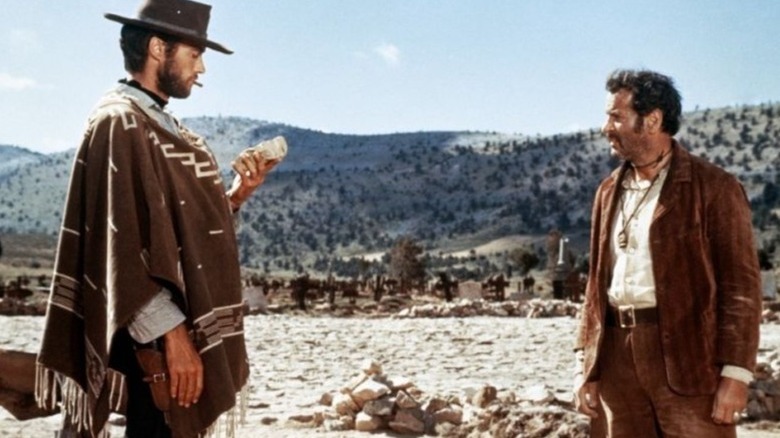 The film's sprawling, nearly three-hour narrative focuses on three men as they search for $200,000 worth of Confederate gold. The first of the trio to be introduced is "the Bad," a ruthless mercenary named Angel Eyes (Lee Van Cleef), who learns that a man named Bill Carson knows the whereabouts of the treasure. Meanwhile, "the Good" Blondie (Clint Eastwood) has established a con with "the Ugly," Tuco Ramirez (Eli Wallach). Blondie delivers the wanted Tuco to a town sheriff, collects his bounty, and then shoots the bandit's noose off right before the hanging. Tuco gets a cut of the money, but he also gets fed up with coming so close to death every time. In response, Blondie simply leaves Tuco in the desert, tired of hearing his constant whining.

There's a strange game between these two characters that plays out during the film's progression, as they depend on each other for as long as it takes before either of them finds it convenient to betray the other. For instance, Tuco manages to vengefully capture Blondie and dehydrate him in a walk across the desert. However, they run into a dying Bill Carson, who whispers to Blondie where the treasure is hidden, leaving Tuco to frantically try to resuscitate his "partner" with water. The duo end up working together again, even after getting captured by the Union army. Angel Eyes reappears too, as an undercover Union soldier who tortures Tuco to learn the location of the treasure. All three of them escape the prison camp, and all three of them have intersecting paths leading to Sad Hill Cemetery.

Tuco's Gets Frantic In The Cemetery 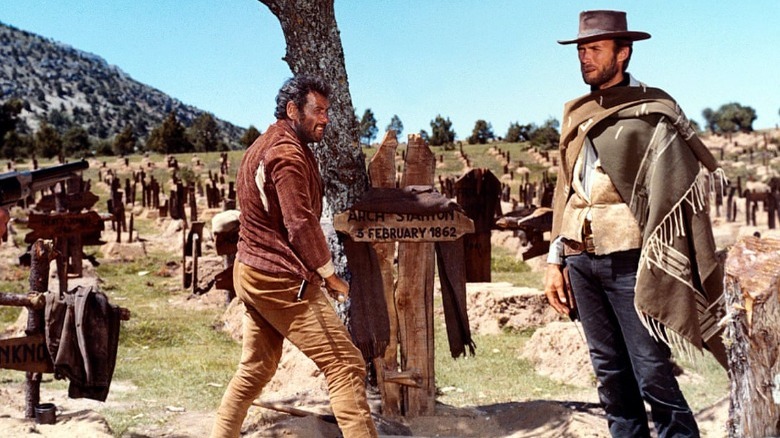 In an effort to stop a raging Civil War battle so they can clear a path to the cemetery, Blondie and Tuco blow up a bridge, an act symbolic of the film's literally explosive climax. Tuco strikes a deal with Blondie to exchange information while they set up the dynamite, but of course, Tuco tries to reach the cemetery first once Blondie tells him the name on the grave is "Arch Stanton." Blondie, ever so cool and collected, plays with Tuco by launching cannonballs at him, but the bandit makes it to Sad Hill anyway.

Tuco frantically searches for the grave of Arch Stanton in a madcap manner that has the camera literally spinning in circles faster and faster. Finally, he sees Arch Stanton's name on a grave, although the shot also includes an adjacent grave marked "Unknown." That's a subtle way of foreshadowing the true location of the money, which, at this point, is unbeknownst to everyone (including the audience) except Blondie. To make the discovery more ironic, Tuco takes the wood marker from the Unknown grave as a makeshift shovel to dig up the dirt around Stanton's burial mound. Leone utilizes one of his trademark images and constantly cuts back to Tuco's frenzied eyes as they dart back to the name on the grave, dead focused on uncovering the stash of gold.

We've Got An Old-Fashioned Mexican Standoff 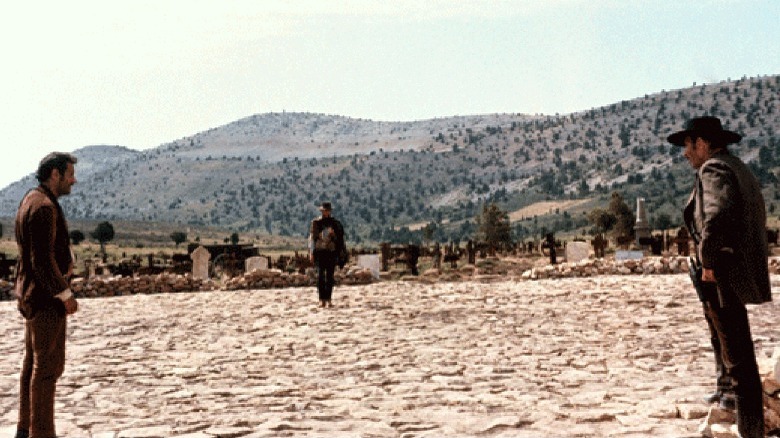 All that time searching and digging allows for Blondie to catch up, arriving as a looming shadow and tossing Tuco the shovel. There's a close-up of Tuco's hand as he considers his gun, then a comical shrug as he realizes it's not worth it. Unfortunately for the both of them, Angel Eyes also appears and repeats the gesture, threatening Blondie with his pistol. However, Blondie reveals that he lied about the location of the money, and after walking to the dramatically circular center of the cemetery, writes the real grave's name on a stone. More eye-darting ensues as the trio observes each other's guns and realizes that they are, in fact, officially in a Mexican standoff.

"The Good, the Bad, and the Ugly" isn't the first occurrence of a Mexican standoff, but it did solidify the use of the famous trope in film. The trio forms a triangle, their backs turned to the tombstones behind them, death in back, death in front. Leone's direction of this scene encapsulates his theatrical style, establishing the graveyard as an arena with a wide shot before cutting back and forth between the three contestants. The editing grows faster as Ennio Morricone plucks his guitar strings and each cut zooms closer in on the participants' faces until all that's visible are their shifting eyes and their hands slowly reaching for their holsters. All of a sudden, the tension erupts in gunpowder as Blondie fires at Angel Eyes. Tuco, meanwhile, can't seem to get his gun working because Blondie removed his bullets the night before. 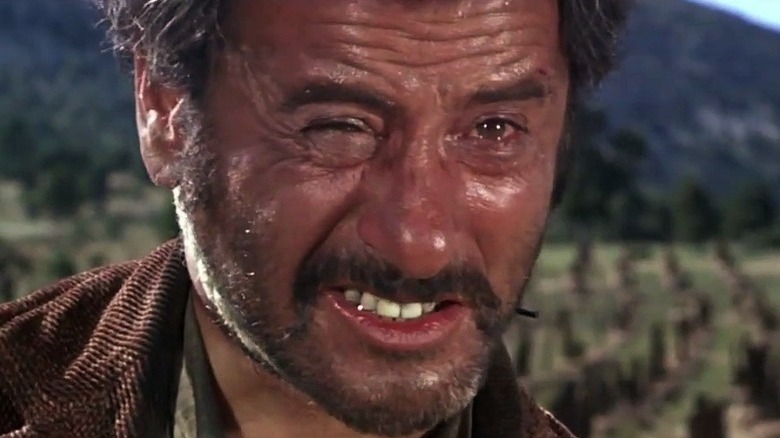 Blondie reminds Tuco that "there are two types of people in the world, those who shoot and those who dig," and once again tosses him the shovel. He also reveals he never wrote anything down on the stone, which begs the question of whether the other two would have figured out the riddle if Blondie had died. Tuco does end up uncovering the gold, but looks up to find a hangman's noose waiting for him. Blondie gets to enact his revenge against his partner by putting him in the same position as he was at the beginning of the movie. As a reminder, Blondie playfully mentions that it "seems like old times" as Tuco is left standing on a flimsy wooden grave marker while his riches are right under his feet.

Blondie disappears into the distance but rebounds once he's presumably had enough fun tormenting Tuco and shoots him down. The bandit lands head-first in a bag of money and then gets up and yells that Blondie is "just a dirty son of a bitch." "The Good, the Bad, and the Ugly" ends with a mean joke, but that perfectly encapsulates the spaghetti Western's unforgiving view of the Old West. Still, as the title cards flash over each character, there is a strange sense of justice to their fates. The Bad lies dead in a ditch, the Ugly is comically bound and unable to immediately reap his reward, and the Good rides off into the distance, money in stow. Quick hands and cold-blooded wit wins in Leone's frontier.

Read this next: The 20 Best Westerns Of All Time

The post The Good, the Bad and the Ugly Ending Explained: Seems Like Old Times appeared first on /Film.