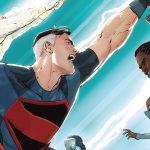 Ray: When this miniseries started, it was a little hard to figure out exactly where it fit into continuity. This issue makes it clear—it is in fact in current continuity, as Superman plans to leave Earth to take the fight to Warworld and leave his adopted planet in his son’s hands. But certain things still don’t fit—namely, Superman’s aged appearance and his fast-waning powers which haven’t been reflected to this extent anywhere else. But I chalk that up to Grant Morrison, the famous wild-card writer who was probably just given the bones of the status quo and proceeded to make their own insane story out of it. There is a lot going on in this story, most of it good, as Superman and his newest team take on not one but two of his deadliest enemies. The Ultra-Humanite seemed like the mastermind here, but his plot was bigger and more competent than usual—so enter Brainiac, arguably Superman’s most competent enemy.

Morrison goes surprisingly dark in this book, darker than their usual Superman work. The characters involved are immortal or close, but it’s still jarring to see two explicit decapitations in a Superman book. This take on Brainiac and his motivation are very strong, but it feels like there might be a few too many villains in this story. It’s great to see Manchester Black “reunited” with an old friend from the Elite, but many of the villains are sort of generic and there’s a good deal of exposition shouted in the middle of the fight. But the team that forms by the end is fascinating, and it’s great to see the Tangent Flash reinvented for this story. There will apparently be a little more coming in a one-shot guest-starring Batman by a different creative team, and the epilogue leaves us with a fascinating cliffhanger. If this is Morrison’s mic-drop at DC, it’s a worthy celebration of the writer’s eclectic body of work.

To find reviews of all the DC issues, visit DC This Week.

Click through to read all of "Review – Superman and the Authority #4: Earth’s Last Stand" at GeekDad.If you value content from GeekDad, please support us via Patreon or use this link to shop at Amazon. Thanks!