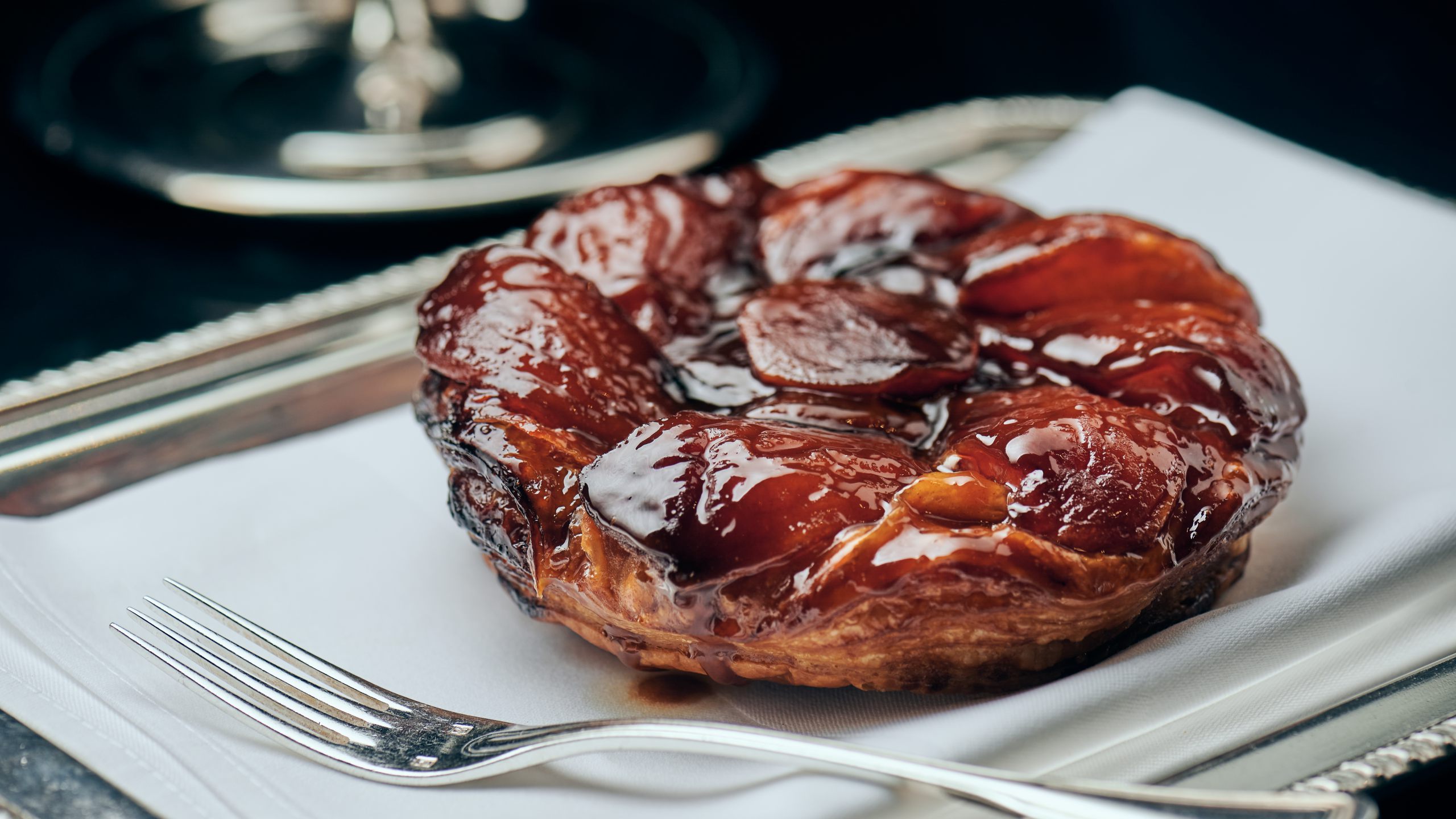 Contrary to what you might expect, the arrival of a new executive sous chef at Island Shangri-La -- Mr. Cary Docherty, formerly of Gough's on Gough -- doesn't come with a harrowing change of course for Admiralty's favourite seafood bar. But Docherty's updated menu (developed with ample input from Lobster Bar and Grill's head chef Kenny Chan) puts a fresh gust of wind into the restaurant's already billowing sails. Given the path already being charted, that's good news indeed.

Hong Kong's relentlessly buzzy restaurant culture means that whenever a chef so much as contemplates 'a leave of absence,' diners shift into full-blown detective mode. Intrepid gourmands (and fans of the now-defunct Gough's on Gough) have no doubt been curious since early March, when Cary Docherty arrived at Lobster Bar and Grill to develop a 'new' à la carte menu, whilst taking on other hotel-wide responsibilities at Island Shangri-La.

On top of what Lobster Bar regulars already know and love -- such as lobster bisque and Dover sole -- Docherty has now added a few remasters from his Gough's on Gough days, on top of some choice calibrations of the menu that chef Chan has been cooking since 2017.

Their collective efforts have delivered positive results: During my mid-week visit to have a crack at the revamped menu, the venue was enthusiastically attended.

Given that Lobster Bar and Grill has been a fixture of Admiralty's dining scene since 1991, a full-blown design manifesto isn't something that's strictly necessary (nor was it on the cards). By way of an introduction: the venue is situated off of Island Shangri-La's main lobby, and true to its name, is split between the traditional bar/lounge area and a dining room with its own dais. Within the broader setting of Island Shangri-La, I've always felt the space embodies the quintessential ‘hotel bar’ look which we associate with the latter half of the 20th century.

Trend chasers will likely disagree, but there’s something so gratifying about how every inch of the decor is so resolutely unconcerned with modernity: from the Moroccan-style lamps tinged in French blue to the vaguely Rococo prints swaddling every wall. Against a soundtrack of evening warbles (jazz vocalist Akia Knowles performs Monday-Saturday) I found the whole setting put me into a distinctly sentimental mood -- an ideal state for many of the restaurant’s unabashedly old-school dishes.

Several key new additions to Lobster Bar and Grill's menu bring diners up to speed on chefs Docherty and Chan's preferred mode of cuisine -- English bistro-inspired fare. A diminutive starter of crab toast (HK$388) cribs from Chef Cary's tenure at Gough's on Gough, whilst also working in Lobster Bar and Grill's reputation for crustacean offerings (the seafood platter is as venerable as the restaurant itself). Here, two thick-sliced batons of brioche -- toasted in beef fat 'til golden brown -- cushion dollops of crab mayonnaise, loaded with avocado, gem lettuce, some much-needed dill and citrus. Each mouthful brings a pleasing contrast in flavour and texture: The sweetness of crab and pucker of lemons, plus the crunch of bread against velvety mayo.

Mains meanwhile tell a story of collaboration. The Thermidor (HK$598), a fixture of Lobster Bar's menu, has been subtly remixed with a joint effort by both chefs, who opted to add a few ingredients and change up presentation. Rather than being served stuffed in-shell, the lobster is plucked out and served casserole-style in a cast iron dish -- along with mushrooms, pickled shallots and roasted new potatoes. The dish is plied with Thermidor sauce (to all intents and purposes, béchamel flavoured with mustard) then slid into a hot oven, allowing the assembled flavours of cheese, shellfish and vegetables to intermingle until they achieve a degree of hearty, delicious intensity, and a little different from what most diners are expecting from the traditionally refined dish.

It isn't until I get to the one non-aquatic main of the evening that Lobster Bar and Grill starts to run adrift. A bone-in rib of Iberico pork (HK$380) certainly looks the part when it arrives table-side. The interior of the rib is pretty spot-on thanks to its sous vide technique, but let down by an aggressively chargilled exterior -- resulting in lack of moisture in leaner parts -- and the overly seasoned charcutière sauce that accompanies it. In the past, those who've sampled chef Docherty's Dingley Dell pork loin at Gough's on Gough know well the joys of pork that's been expertly tempered and simply seared. Lobster Bar's take is hardly terrible, but it's difficult not to compare when the dish invites so many direct parallels.

As it happens, my disappointment turned out to be a flash in the pan not long after dessert arrives. Like a number of other dishes on the revamped menu, Lobster Bar's Tarte Tatin (HK$188) is ripe for a twofer; and if your dining companion has even the faintest sweet tooth, you'll soon find yourself scrambling to stop them from inhaling your share. Ever since his Maze Grill days, chef Docherty has had a penchant for crafting desserts that are simple, indulgent and defined by technique. Such qualities shine through in a pudding for the books: Combining puff pastry so crispy it could trigger an ASMR response, with caramelised slices of apple that have been air-dried for concentrated flavour and satisfying chew.

Bar Manager Bob Louison's revamp on the mixological front with the new ‘Archivist’ cocktail menu -- exploring iconic beverages from several eras beginning in the 17th century -- easily warrants its own feature-length dissection, but for present purposes it’s enough to know that the entire Lobster Bar cocktail list is available to you at the dining room.

On the off-chance you don’t wish to avail yourself of Louison’s award-winning tipples, the restaurant benefits from Island Shangri-La’s amply stocked wine cellar -- laden with hidden gems, household names and a few left field options selected by wine director and Master Sommelier Johann Yousselin. A glass of 2017 Adelsheim Chardonnay (HK$150) is such an example of the latter. Comprising fruit hand-picked from multiple sites in northern Willamette, this is a vibrant style of Chardonnay full of pear and white floral aromas. The wine's two-part fermentation process -- ageing the majority in French oak, and the rest in stainless steel tanks -- imparts a lively character in-glass that upends typical expectations of New World white.

On the flip side, a glass of 1995 Château Poujeaux (HK$320), made possible with the aid of Coravin, embodies all of the gravitas you'd expect from a reference highlighted under 'Sommelier Suggestions.' Long considered a value pick for Bordeaux, Poujeaux's lengthy history of winemaking dates back to the 16th century. Unlike a lot of modern blended red wines, this '95 has maintained a robust tannin structure after ageing -- adding depth and freshness to what is otherwise an endlessly satisfying faceful of dark fruit, cassis and mineral-tinged earth.

Longtime patrons of Lobster Bar and Grill can rest easy knowing that their favourite hotel hangout is, in all matters of substance, unchanged. The arrival of chef Docherty heralds, if anything, a mere fine-tuning of the restaurant's core specialisms. That means comforting, throwback-inspired bistro cooking; an emphasis on freshly sourced seafood; service of a kind that's rapidly disappearing from view in our alarmingly nonchalant world; the stiffest of tipples; and yes, a price point to match. Think of this as a soft reboot: But unlike most external overhauls, an entirely good one.