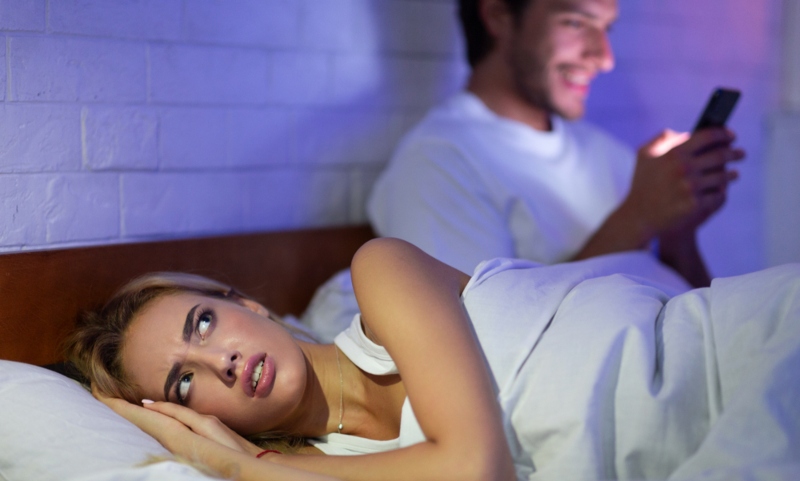 I inched towards the door, following the familiar gasps and excited grunts until my hand inadvertently coaxed the knob forward.

Once you’ve heard a man’s ascent to ecstasy — whether in your bedroom, on the phone, or behind a closed office door — you can’t deny those unmistakable sounds — especially when they’re coming from inside your own house.

I braced myself for Hubby’s mistress — who I’d put out of my mind since the holidays, clinging to the hope that their relationship and her employment with my husband’s firm were reaching their end. A high-pitched squeal erupted as I slowly pressed the door open.

It wasn’t his mistress. Or his ex-fiancé. Or a woman at all. My husband’s head twirled up and back, as he disentangled himself from the man hunched over the large desk. The stranger whipped his head my way, too.

Fast and easy wins the race — but loses the license

Before Craig could respond, a flash-flood of texts reverberated through my phone, each one with a link more damning than the next.

It took no more than five minutes of Googling for Craig to uncover my husband’s new boytoy’s speckled past — and present. The man sprawled across his desk wasn’t a friend or a business partner; he’s the architect Star shoved down Hubby’s throat for the under-the-table venture that’s seeping into my mom’s bedroom without her consent.

The next link Craig texted was the least damning, yet the most shocking of all: I tapped the preview, and the architect expanded to fill my screen beside a woman who looked identical to Star, but younger and more gothic, holding a child in front of an Addams Family-esque house in Las Vegas. I’m talking gargoyles on the rooftop, Victorian-style molding with black and gold trim, and spiky gates warding off burglars and tourists alike. But the house itself wasn’t the shocker.

Scrolling below the eccentric residence, the interview transcript unfolded — and the architect and his wife revealed their inspiration for the emo estate. His wife wasn’t named Star, but she sure did look like a carbon copy if I’ve ever seen one. And the kid in her arms…he looked vaguely familiar, too.

Craig hung on for my answer, but I think we both already knew the truth. What I don’t know is which part to tell my husband first:

It’s either that, or let my husband get swept away by Star’s seduction and fall on his own sword…as long as I don’t get spattered by blood in the process.

The vibrations shook our car seconds before I swerved into the Dana Point cul-de-sac where the deafening beats emanated from my parents’ house. The yard remained trashed, with the unmanned Tiki Bar and fire pit littered with red solo cups and debris. At least we were prepared — or I was.

My mom, however, grew uncontrollably livid as we approached her $1.3M asset converted into a frat boy’s dream. Brainwashed by Star’s AirBnB evangelism, my dad attempted to rationalize away the disaster with some ill-conceived logic:

Botched facts aside, my mom had already stopped listening and bolted from my car to her old front door.

Suffice it to say, glowing reviews are the last thing on my mom’s mind. My dad and I chased after her, him attempting to pull her back off their lawn, and me attempting to mediate — both unsuccessfully. Ten feet ahead, she’d already begun knocking — or should I say pummeling — the door with her fist. Just as my dad wrestled her fist away from the wooden barrier, it opened — to the shaggy-haired surfer dude’s stoned confusion.

He was the same unfamiliar surfer guy who’d opened the door to the realtor who’d alerted me about the squatters in my parents’ house. However, looking into his eyes from just a few feet away, I realized they did look familiar…

Like an older, weathered version of the kid in the architect’s picture…

With no request or warning, my mom barged past the sputtering surfer, into her house, ready to examine the damage. My dad regurgitated a stream of gracious apologies to his alleged AirBnB guest, while I followed my mom beyond the foyer.

As if we’d stumbled into a ghost, my mom froze in the living room. There she was: Star. And there he was: My husband.

The 90-minute drive north to Manhattan Beach evaporated into a blur, mired in mental reenactments of Star, the architect, the shaggy-haired guy, and the chaotic events at the AirBnB from the day prior. Unfortunately, I wouldn’t be able to share any of that with my lunch date, who’d requested my covert attendance to discuss another one of my husband’s veiled engagements.

I spotted Kate (my sister-in-law) at a back corner, The Strand House’s floor-to-ceiling glass windows flanking her unusually hunched figure with unobstructed ocean and palm tree views on either side. “Kate” and “disheveled” are usually polar opposites, but today — in the wake of her husband’s lies (and my husband’s financial assistance covering them up) — she appeared a far cry from her typically poised, calm, and presentable self.

She dug in her purse for an envelope, then thrust a crinkled photograph onto the table.

“Have you ever seen this woman?”

I had — but answering affirmatively felt like a trap. She was Kate’s predecessor, whose dissolved engagement with my brother-in-law occurred 16 years ago, during my first pregnancy — just months before Kate entered the picture.

Kate unfolded a handwritten letter and another more recent picture from the envelope. A tan, square-jawed teen stared back at me from the table.

I skimmed the cursive confession, which read more like blackmail with every word. Kate was right: According to this letter, the square-jawed kid was Kate’s husband’s.

Kate paused, then looked up from the letter, with threateningly serious eye contact that straddled the line between desperate and deranged.

“But he claims it’s your husband’s.”

Another pause preceded the precarious question she’d been guarding all along:

“Be honest: Did your husband have an affair 16 years ago? Because if not…”

Kate didn’t finish her sentence; she didn’t have to. Her eyes darted down to her wedding band, which she spun in circles with her agitated right hand — telling me exactly what “if not” meant.

She wanted me to throw my husband under the bus to save hers. And based on his sexual track record, it wouldn’t be all too far-fetched. But then again, am I really supposed to stomach the notion that my husband has an illegitimate child I’ve never known about? And that he got the woman pregnant 16 years ago — during my own pregnancy? If that isn’t the ultimate marital betrayal, I don’t know what is.

Furthermore, if Hubby’s been paying off his brother — and perhaps the mother of his illegitimate child — how many other trails of blackmail are siphoning off his earnings? And how many other secrets has my PI yet to uncover?

You think you know a person

Staring right back at Kate, ready to crucify my own husband for his adulterous sins, one shocking realization struck me: I don’t know her at all.

Everything I’ve known about Kate and her marriage was incinerated by one accusatory phone call and further torched by today’s desperate plea. That all came after more than a decade of intertwined family gatherings as “sisters-in-law”. Whether Kate’s perfect marriage is reality or a façade, her request to sacrifice my own in her favor doesn’t sit well. Does she even care if she’s breaking the news of my husband’s greatest betrayal, or does she just care about maintaining the trappings of her own family’s “perfection”?

But Kate isn’t the only one concealing a lesser-known side. What about the fugitive architect — and his relation to Star — or whatever her name is? Is he a referral or an ex-husband? Or a current husband? Is Star more invested in that architect’s proposal than my husband and dad might suspect?

And then there’s the kid. Her kid? And the shaggy-haired squatter. Or are they one and the same, but ten years apart? Is Star actually dating my dad or just using him — and my husband — to resurrect her clandestine family “business”, whatever that is?

Lastly, is my husband the common denominator in all things infidelity, or could his brother be equally skilled in the art of marital deception and adultery? If he was able to keep his drinking and firing under wraps for this long, what else could he be hiding? Sure, my husband’s the perfect scapegoat — but is it possible he’s actually innocent this time?

If this week’s taught me anything, it’s that whether you’ve known someone for 16 years or 16 seconds, one discomforting truth remains: You may think you know a person, but really, you only know one thing: what they let you.

The post My Brother-in-Law’s Fiancé Wasn’t Off-limits to My Cheating Husband appeared first on The Good Men Project.