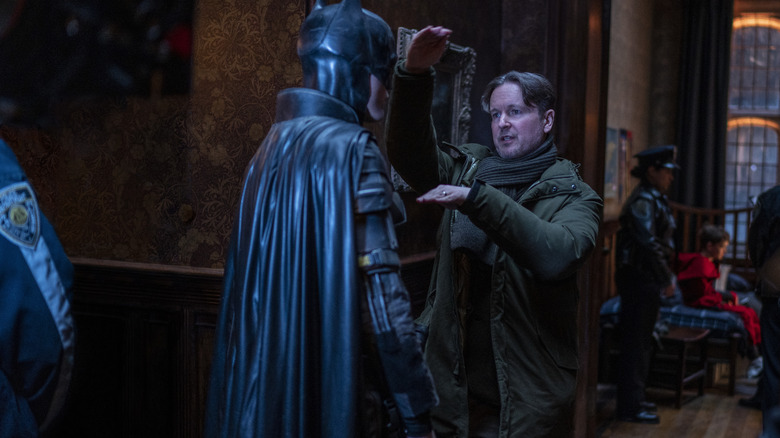 Though he's made a number of high-profile tentpole films already, it feels like Matt Reeves has been laboring away under the auteur radar for over a decade. The director of "Cloverfield," "Let Me In," "Dawn of the Planet of the Apes," and "War for the Planet of the Apes" has gained a new level of attention for helming "The Batman," but he's already built up an impressive filmography since he crossed back over from television into moviemaking in 2008. In a less superhero-obsessed world, it feels like Reeves' name would carry more clout by now, similar to his contemporary, Denis Villeneuve, another filmmaker who emerged as a distinctive new voice around the same time and has since come into his own as a science fiction director.

Reeves actually made his feature-film directorial debut in 1996 with "The Pallbearer," a tepidly reviewed romantic comedy starring David Schwimmer and Gwyneth Paltrow. After that, he went off and did TV for ten years, most notably co-creating the Keri Russell-led drama, "Felicity," with J.J. Abrams.

As a teenager, Reeves and Abrams got their start together, winning film awards and even being enlisted by Kathleen Kennedy to transfer Steven Spielberg's old Super 8 home movies to videotape for him. Abrams later went on to serve as the co-producer of Reeves' sophomore feature, "Cloverfield." It put Abrams' production company, Bad Robot, on the map, and it's one of those movies that was marketed on the strength of its producer's name recognition.

Reeves Was Overshadowed Early On 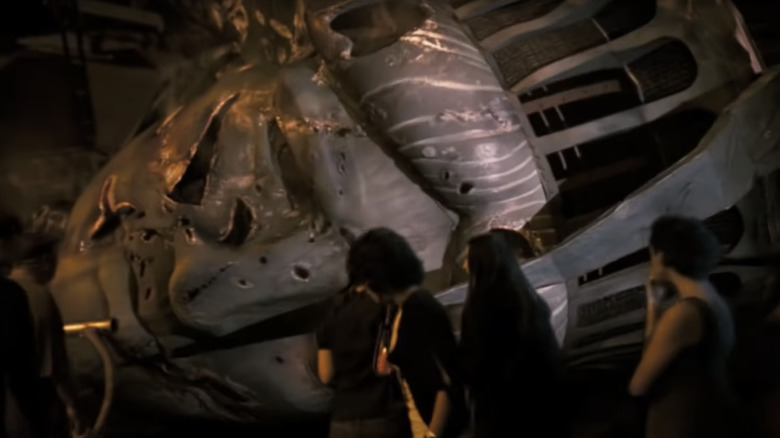 By 2008, Abrams was already well-known as the creator of "Alias" and co-creator of "Lost," though his involvement with the latter series waned as he took on "Mission: Impossible III" and Carlton Cuse came aboard to run the island-set mystery show with Damon Lindelof. With "Cloverfield," as with "Lost," Abrams' name became conflated with the project in the public's mind such that it somewhat overshadowed that of the real chief creative (similar to what happened in 2021 with producer Jordan Peele and director Nia DaCosta on DaCosta's "Candyman" remake).

The first trailer for "Cloverfield" notably billed it as a movie "From producer J.J. Abrams." Reeves' name only appeared in a quick flash onscreen at the end with the other standard credits display.

Written by Drew Goddard, "Cloverfield" has a few script glitches, mostly related to its damsel-in-distress plot, in which the cast of fresh-faced young beautiful people, including Michael Stahl-David and Lizzy Caplan, venture back into Midtown Manhattan to save the hero's girlfriend — who is literally stuck up in a tower. Yet "Cloverfield" helped lead a resurgence of found footage films in the late 2000s and it's still a landmark entry in that genre.

Though it was reverse-engineered from an old movie poster for John Carpenter's "Escape from New York," images in "Cloverfield" like the Statue of Liberty head crash-landing in the street — only to attract gawkers with new-fangled camera phones — remain indelible to the time period. Another Carpenter film, "Christine," or at least the Stephen King book it adapted, influenced Reeves' horror-movie approach to the Batmobile in "The Batman."

Let Me In Ironed Out The Kinks Of Cloverfield 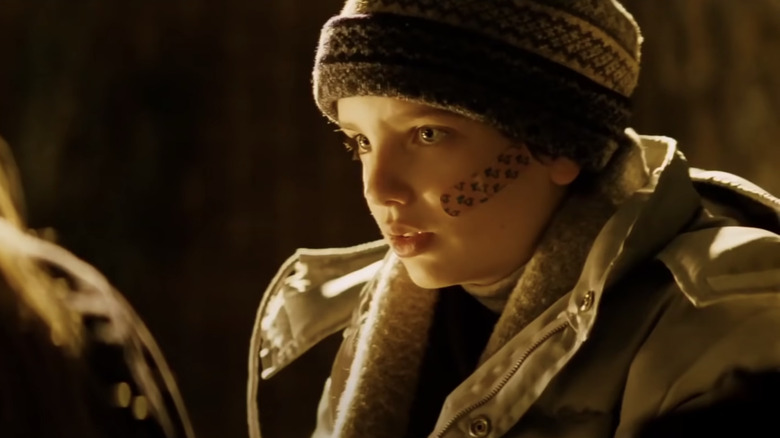 With its urban disasters and post-9/11 dust clouds, "Cloverfield" manages, in its best moments, to be an above-average found-footage flick that puts the viewer on the street in the middle of a Godzilla-type monster attack on New York. For a feature filmmaker whose only calling card before this was "The Pallbearer," Reeves made a quantum leap forward with "Cloverfield." It saw him engage with high-concept genre fare and deliver the kind of popcorn movie you'd be excited to see with your friends or a date on opening weekend. Like "Paranormal Activity," "Cloverfield" even gave birth to its own franchise, in this case, a series of loosely connected films that includes "10 Cloverfield Lane" and the less-well-received "Cloverfield Paradox."

After "Cloverfield," came "Let Me In," Reeves' 2010 re-adaptation of the Swedish vampire novel, "Let the Right One In." We'll have a more in-depth feature about "Let Me In" up this weekend, but suffice it to say, it's a film that was unfairly dismissed by some remake-weary cinephiles. It's also a movie where Reeves really came into his own as a filmmaker, ironing out the kinks of "Cloverfield" by writing his own adapted screenplay.

Reckoning with inner and outer monstrosity in a bullied boy, played by 2022 Oscar nominee (and "Dawn of the Planet of the Apes" costar) Kodi Smit-McPhee, Reeves gave "Let Me In" its own unique subtext and setting in '80s America during the Satanic panic and Cold War. The film paired Reeves with Michael Giacchino, composer of "The Batman" score, for another memorable soundtrack album, and it's a movie that belongs in the same auteur-remake category as David Fincher's "The Girl with the Dragon Tattoo."

Planet Of The Apes Solidified Reeves As An Auteur 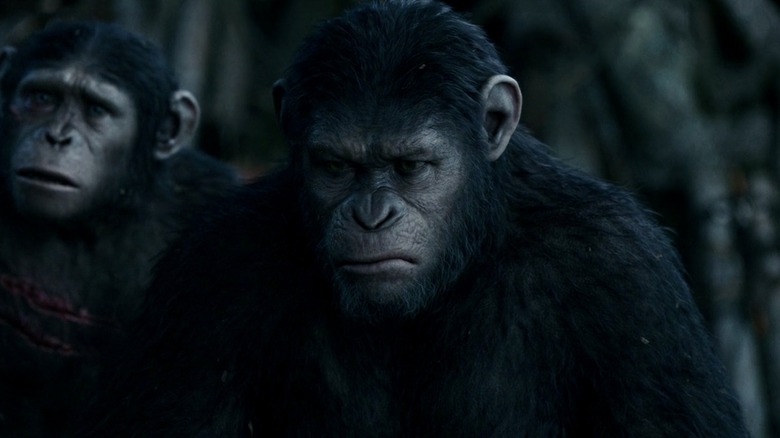 In 2014 and 2017, Reeves was to the "Planet of the Apes" reboot trilogy that Paul Greengrass had been to the 2000s Bourne trilogy. Another director, Rupert Wyatt, had kicked things off with "Rise of the Planet of the Apes," and Reeves came on in the second and third movie to fill out the rest of the trilogy as one of the best of the modern era.

With "Dawn of the Planet of the Apes," Reeves and his cast and crew crafted an astonishing feat of technical wizardry, where the visual effects function as a rich layer of make-up and production design over strong performances and real environments like the Muir Woods National Monument outside San Francisco. At the beginning of the film, there is a moment where the camera blinks upward from the ground at apes swinging through the treetops overhead. Then, it takes on the perspective of the apes themselves, hitting the ground and chasing a herd of deer through the forest. Toward the end of the movie, the camera perches atop a tank turret in a virtuoso shot that gives a rotating view of a battle zone. It's the kind of moment that screams "cinematic."

A society of talking apes may seem like a silly premise, divorced from itself as a proven intellectual property (though with the specter of bird flu and swine flu not long gone, the premise of a "simian flu" wiping out civilization seemed frighteningly realistic. And obviously, the current pandemic has only added to that). Like all good science fiction, however, "Dawn of the Planet of the Apes" serves as a commentary on our own real world of human affairs.

Did We Mention Dawn Of The Planet Of The Apes Rocks? 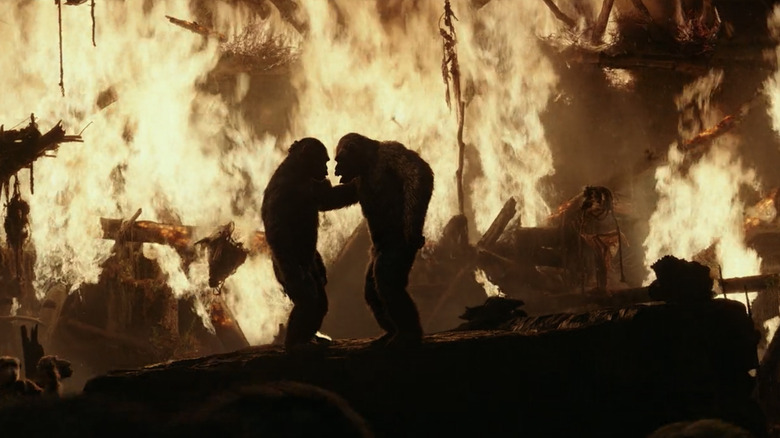 Simply put, "Dawn of the Planet of the Apes" is franchise filmmaking at its finest. It's one of those sequels like "The Empire Strikes Back," "Terminator 2: Judgment Day," or, yes, "The Dark Knight," that is even better than the first movie. The film earned rave reviews and dazzled viewers with its imagery, but because it arrived in the IP-crazed landscape of the 2010s, Reeves' name again took something of a backseat to the "Apes" banner itself. However, he delivered another thematically rich film, as he had with "Let Me In." As we put it on the 50th anniversary of the original 1968 "Planet of the Apes:"

Dawn of the Planet of the Apes unfolds like an epic based on real political events, complete with a coup d'etat that changes the course of history. By the time the movie descends into a nightmare vision of apes unloading assault rifles on unsuspecting humans (in a sandbag nest, and then again later, while charging forward on horseback, against a backdrop of flames), it is clear this film is painting a stark metaphor of human tribalism at its worst.

The focus on apes in Reeves' film belies a universal tale, as if returning the audience to its evolutionary roots, holding up a mirror to our more primitive selves and reminding us that as far as we may have come as a "civilized" species, we still have a long way to go. Andy Serkis as Caesar and Toby Kebbel as the tragic, terrifying Koba make for one of the more dynamic hero-and-villain pairings of the 2010s. Reeves wrung more emotion out of actors in mo-cap as apes than most directors would be able to pull from human characters. 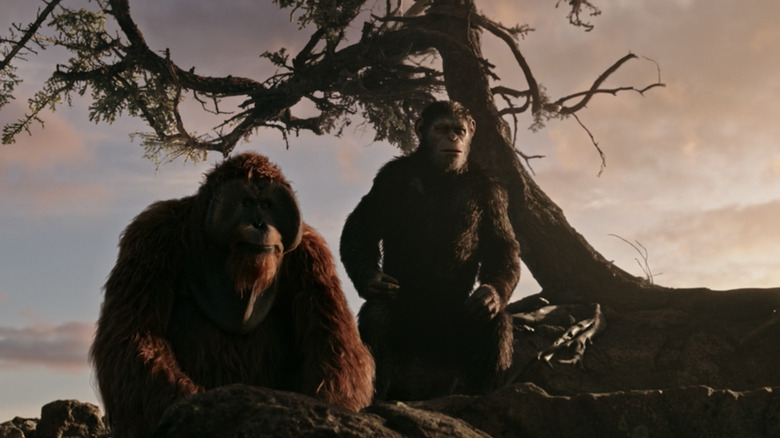 The biggest compliment one might pay "War for the Planet of the Apes" would be to say that it fully sticks the landing for the "Apes" reboot trilogy. Reeves introduces new characters like Steve Zahn's Bad Ape and Woody Harrelson's "Apocalypse Now"-inspired human colonel, but he never loses sight of Caesar's story. In fact, he puts Caesar through hell as a crucible of character before leading the ape survivors and the audience (its own kind of upright ape community) to the promised land of a satisfying trilogy ender.

Call it fan hyperbole, but the "Planet of the Apes" reboot series is probably the greatest modern trilogy filmed since "The Lord of the Rings." Even Christopher Nolan got tripped up a bit in the endzone with "The Dark Knight Rises." What's interesting, if you look back at Reeves' filmography, is the ways in which it parallels Nolan's. "Cloverfield" hit the same year as "The Dark Knight." In "Let Me In," which landed the year of "Inception," Reeves recruited Ritchie Coster, who played the Chechen mob boss in "The Dark Knight," to be the gym teacher at his young protagonist's school.

Maybe that's just a coincidence, or maybe Reeves was already following along closely with the "Batman" film franchise. We know that he has an affinity for certain "Batman" comics. Whatever the case, with "Dawn of the Planet of the Apes" in 2014, Reeves arguably outdid Nolan and "Interstellar." Both directors would release solid summer blockbusters, only a week apart from each other, again in 2017 with "Dunkirk" and "War for the Planet of the Apes." Now, Reeves is once again garnering acclaim with "The Batman," a film that is already being hailed by some as a contender for best Batman movie.

Since 2008, Matt Reeves has worked within the studio system to carve out a body of work that brings true artistry to templates that could easily be disposable in other hands. His films are emotionally effective and technically adroit and have pushed the limits of what found footage, remakes, sequels, and superhero films do. Reeves is proof-positive that auteurism is still very much alive in Hollywood and now wearing a Bat-suit.

Read this next: 12 Awesome Action Movies That Never Got Sequels

The post It's Time to Admit Matt Reeves is One of Our Best Blockbuster Auteurs appeared first on /Film.