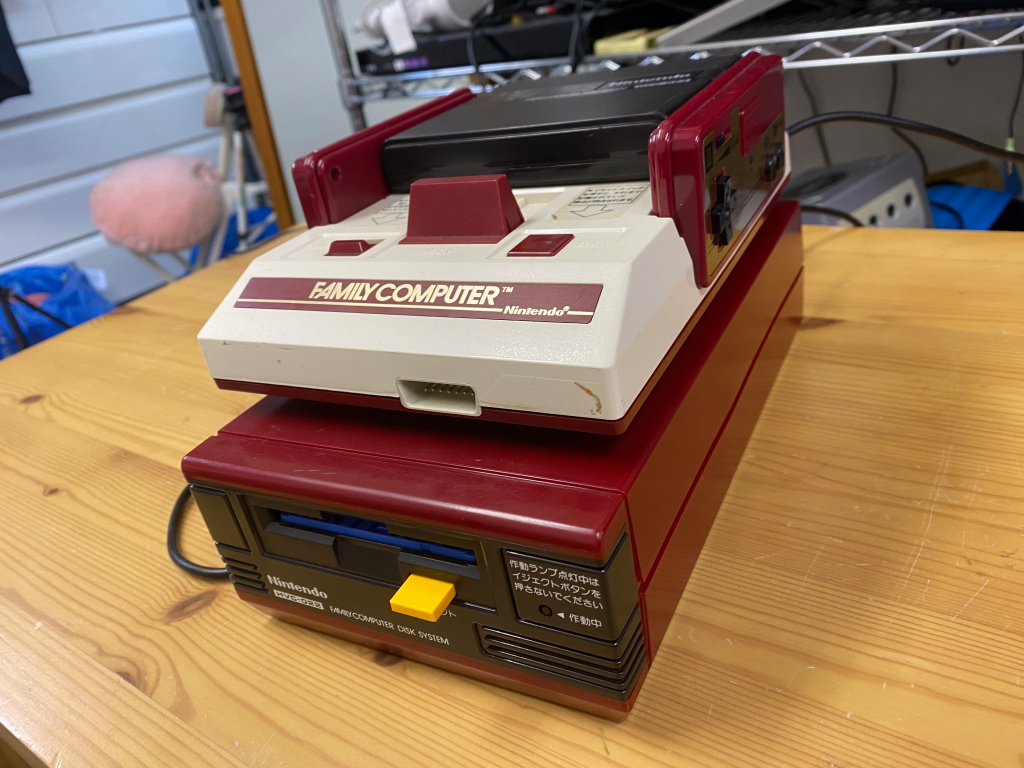 35 years ago today, the Famicom everyone knows and loves went on sale, but what about its often forgotten upgrade?

July 15 marks 35 years to the day that the Famicom, Nintendo’s 8-bit video game console that became the Nintendo Entertainment System in its overseas form, went on sale in Japan. So to celebrate, our Japanese-language reporter Ikuna Kamezawa decided to slip into the SoraNews24 headquarters conference room, which also happens to be where the company Famicom is, to play some old-school games.

But when she got there, she noticed something else on the shelf where the Famicom is kept. 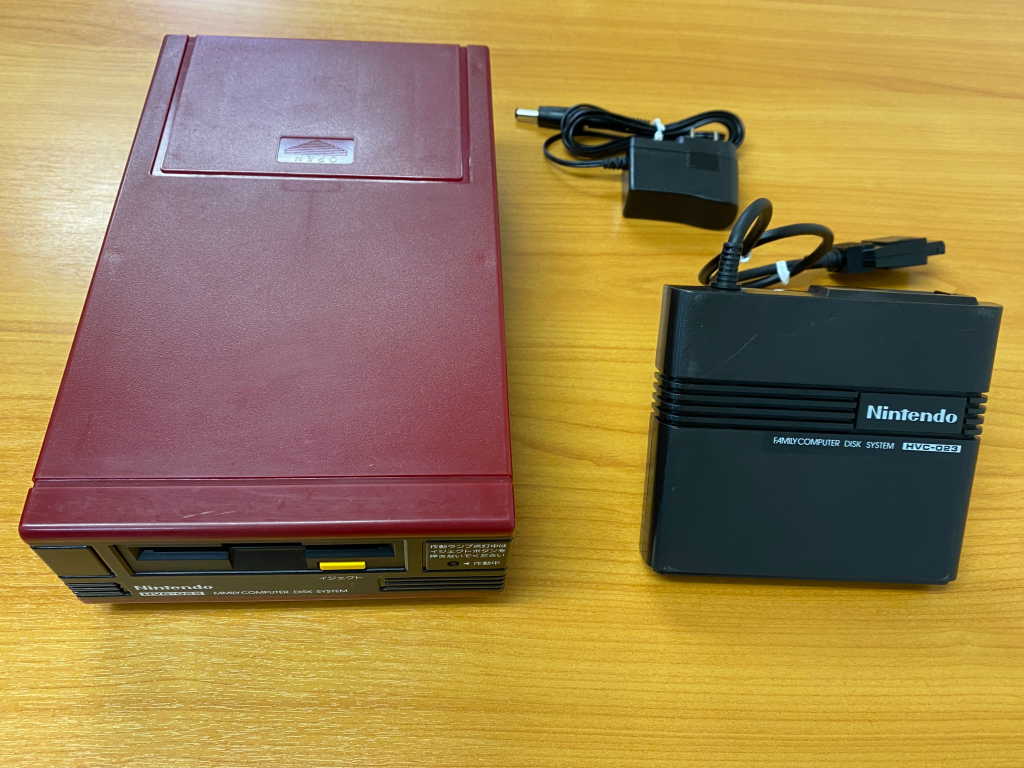 Ikuna had never seen the device before, and with the golden age of the Famicom being before her time, couldn’t imagine what it was. The mystery was cleared up, though, when she examined the front of the red-cased box and saw the words “Nintendo Family Computer Disk System” written there. 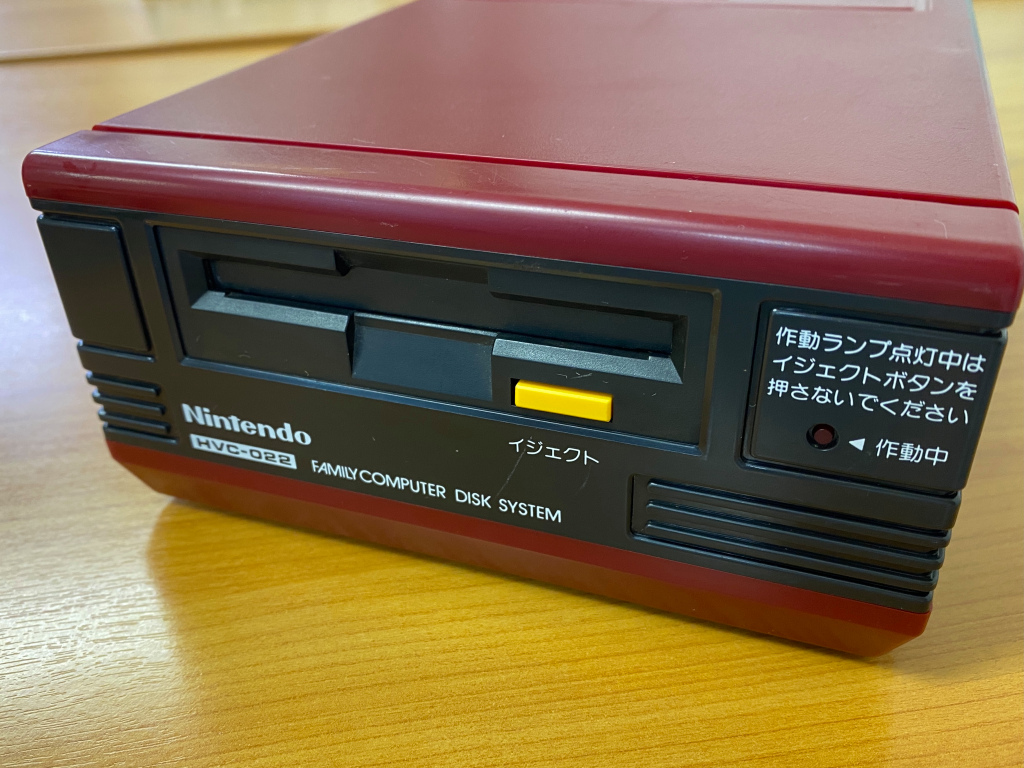 Released about two and a half years after the Famicom’s debut, the Famicom Disk System, or FDS, for short, isn’t a stand-alone gaming console. It’s a Famicom peripheral, and so it has to be used in tandem with the base system. The FDS is actually a pair of add-ons, one of which is a RAM adapter that goes into the Famicom’s cartridge slot. 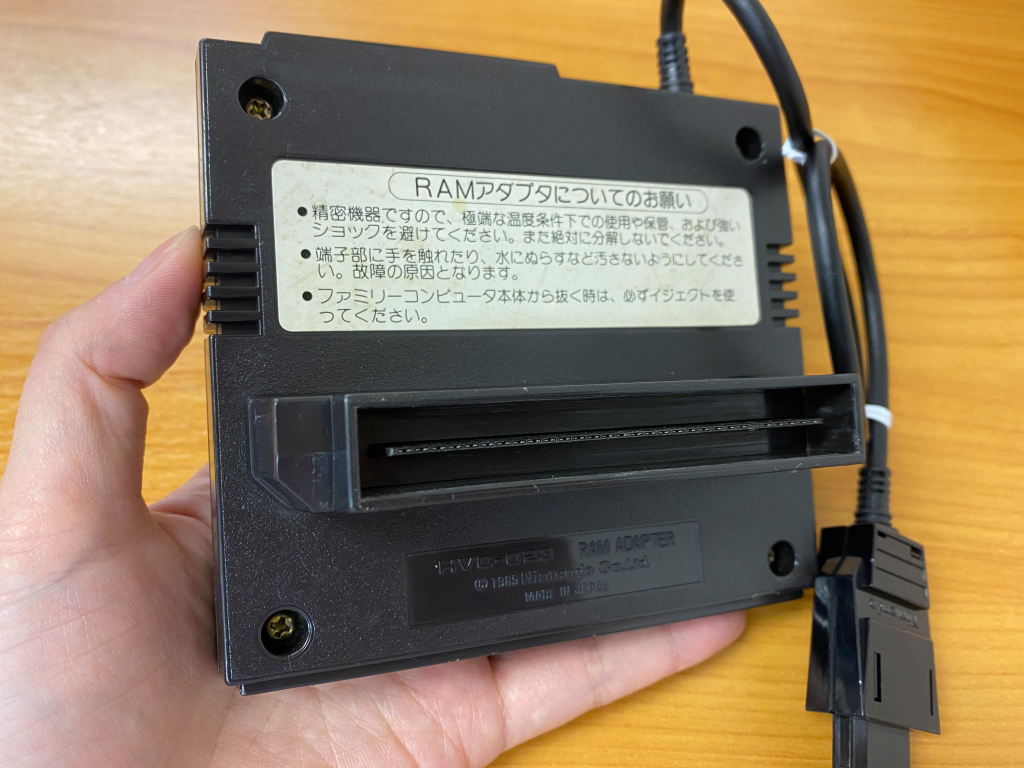 The disk reader, meanwhile, attaches to the back of the Famicom via a cord, and has another for its own AC adapter. 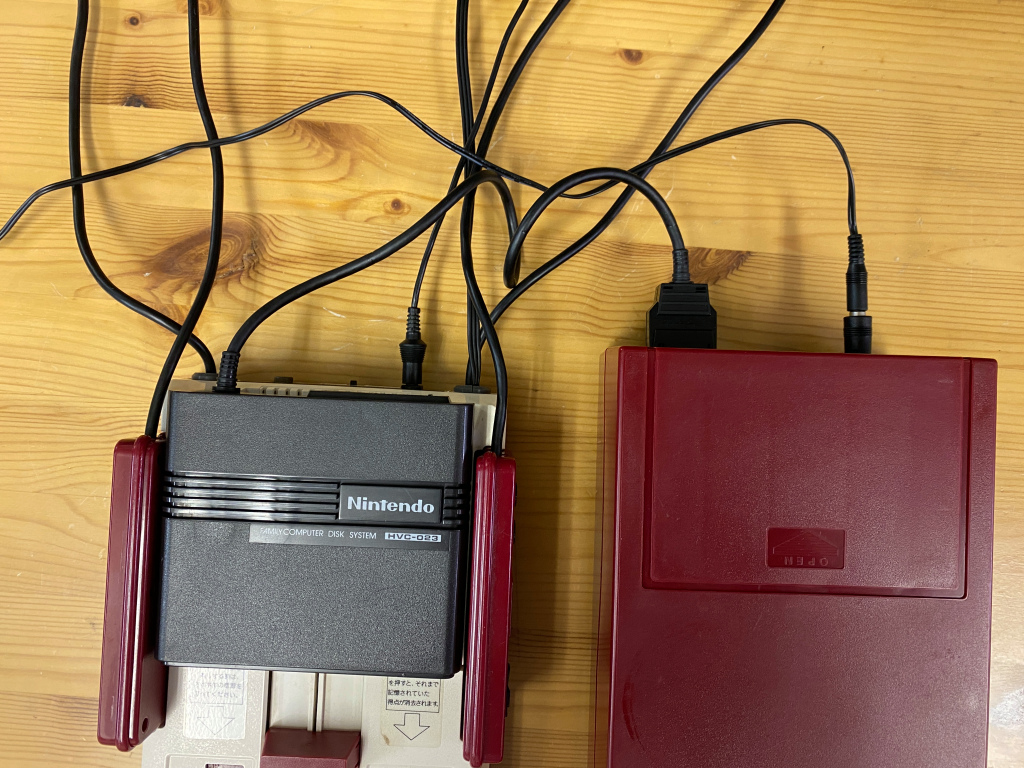 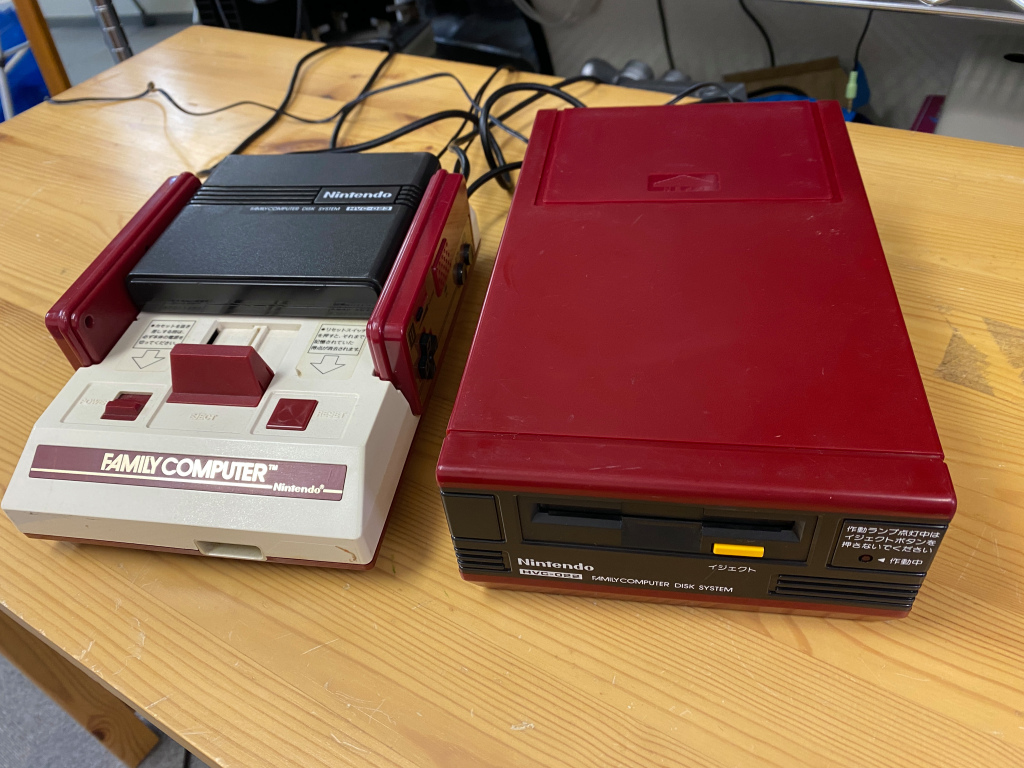 While it’s possible to leave the Famicom main unit and the FDS disk reader side by side, most people chose to stack them, like this, to save floorspace.

Unfortunately for Ikuna, she didn’t find any Famicom Disk System games lying around the office. Luckily, though, SoraNews24 headquarters is in downtown Tokyo, which means it’s just a short train ride to the greatest retro game hunting grounds in the whole wide world: Akihabara. 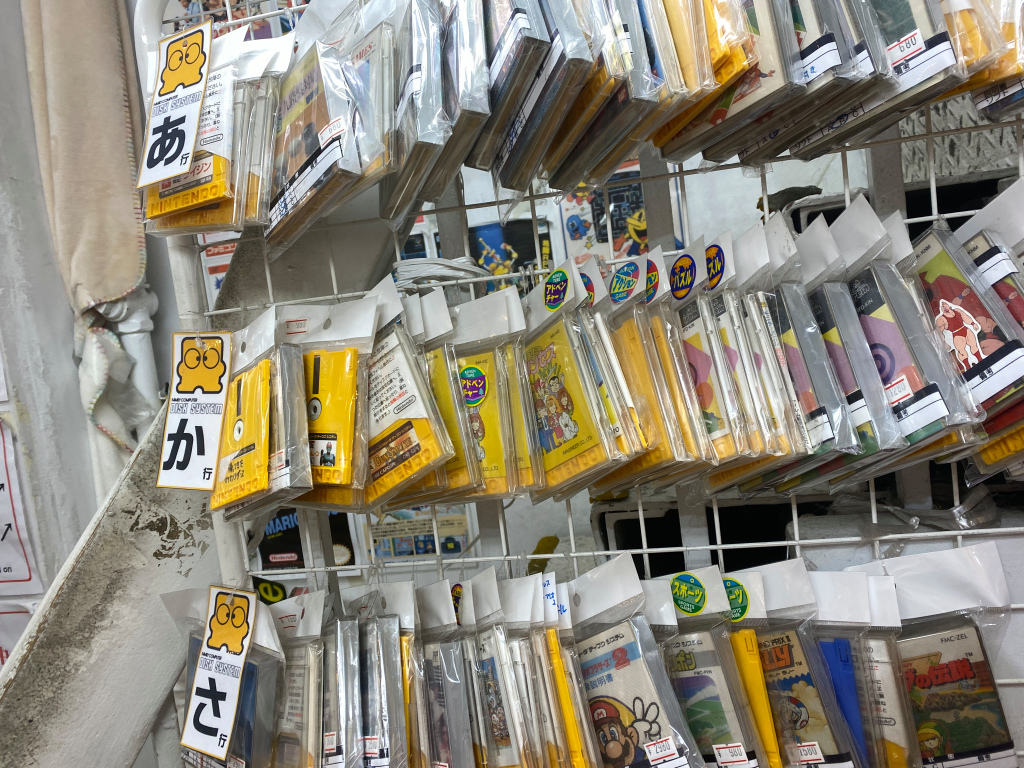 Once she got to the electronics district, she made her way to one of its many shops specializing in great games of yesteryear. In total, almost 200 games were released in FDS format, but since Ikuna was completely new to this corner of gaming, she simply picked out a 580-yen (US$5.30) game that had the most attractive cover, which featured the attractive face of top ‘80s idol Miho Nakayama. 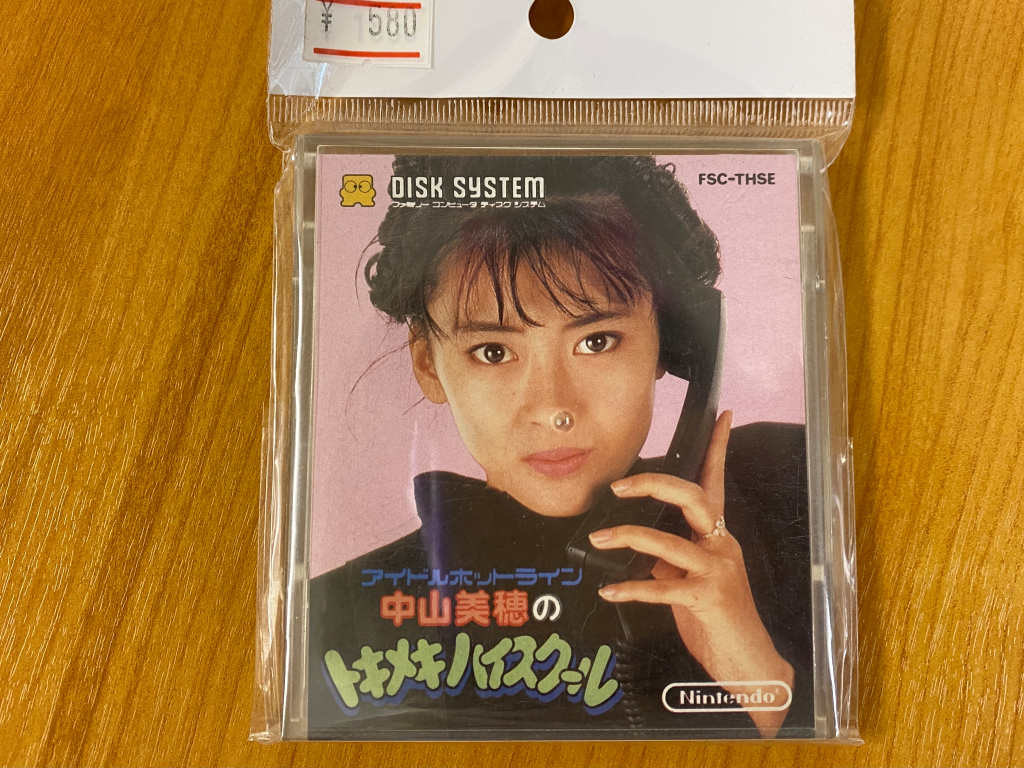 Released in 1987, Idol Hotline-Nakayama Miho no Tokimeki High School, or “Idol Hotline-Miho Nakayama’s Heart-throbbing High School,” is now a time capsule in multiple ways. Not only is it a game on a discontinued medium with Japan’s sweetheart from nearly four decades ago, the then 17-year-old Nakayama appears on the cover holding a corded landline phone receiver that’s startlingly large by today’s standards.

▼ Even the strange indention on the plastic case near the tip of Nakayama’s nose couldn’t erase her charismatic aura. 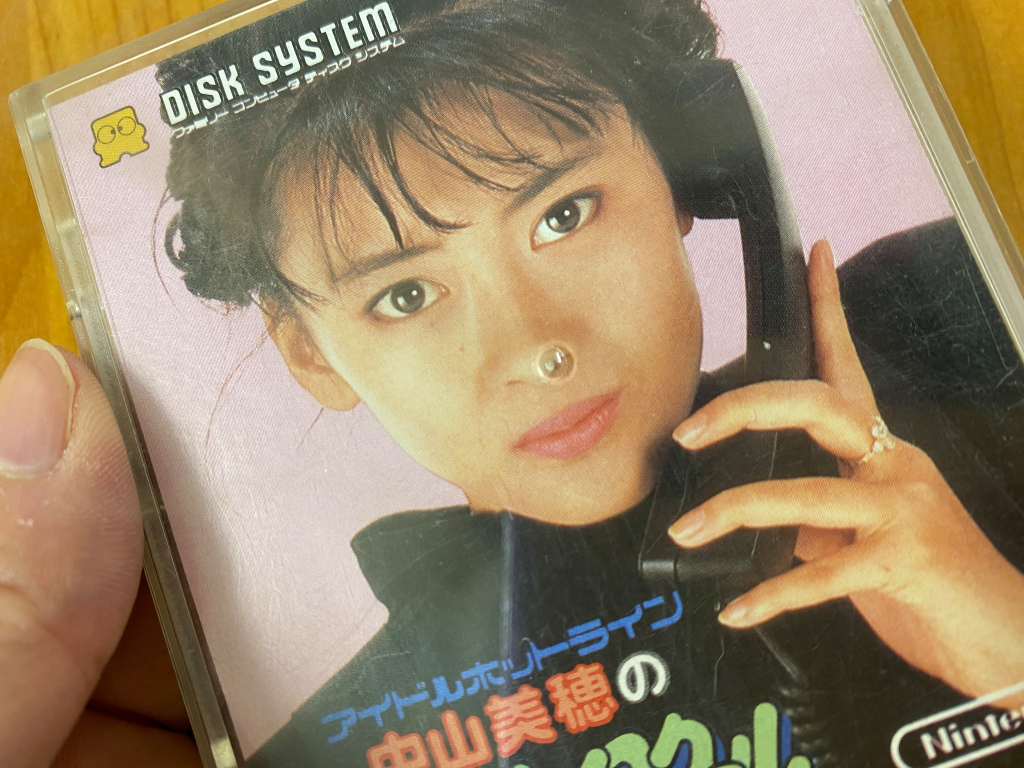 FDS disks are officially called “disk cards,” and this one is a bright blue, with “NINTENDO” written in relief at the top. 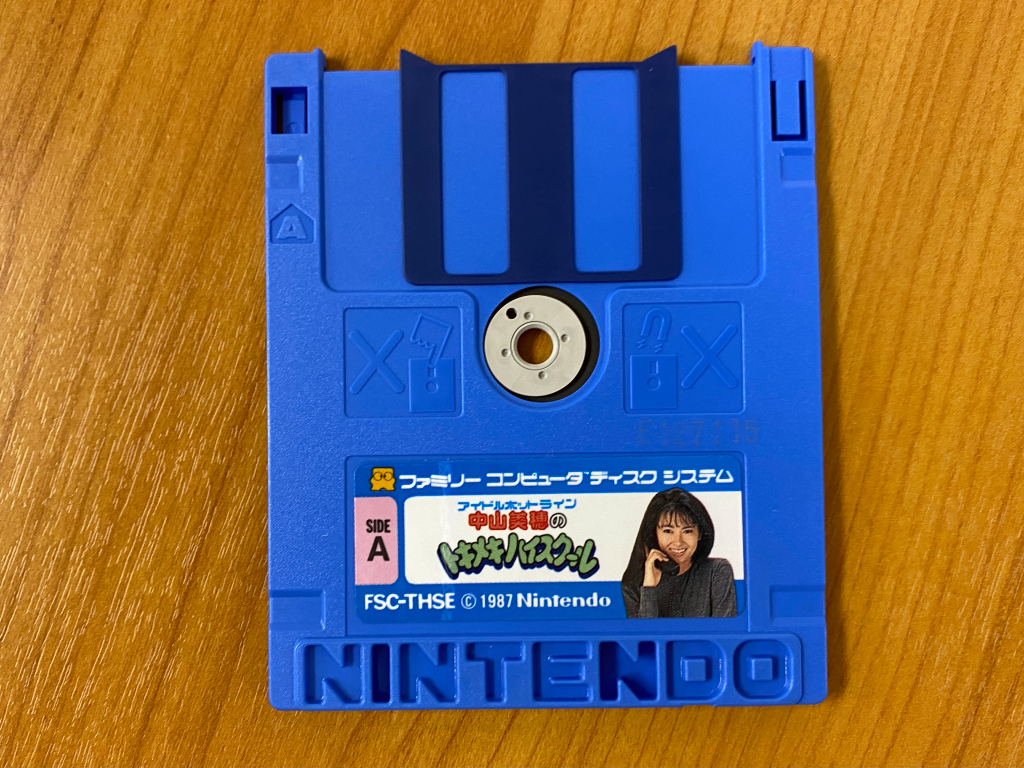 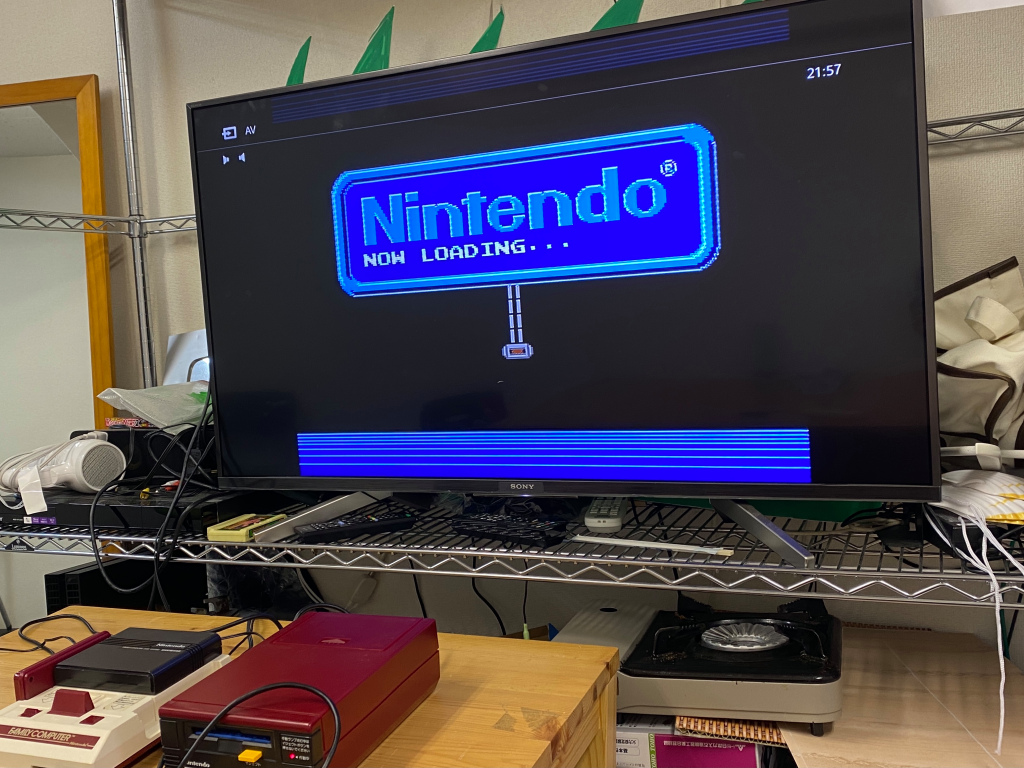 Ikuna inserted the disk, turned on the system, and after a loading screen… 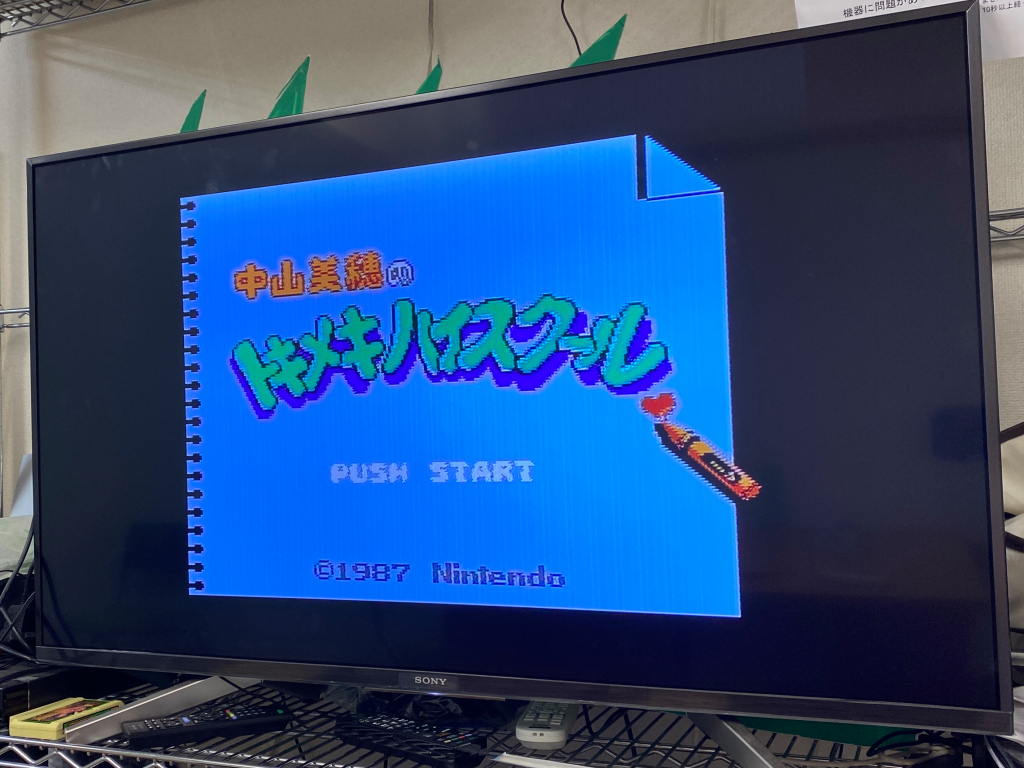 …it was time to start playing the game! 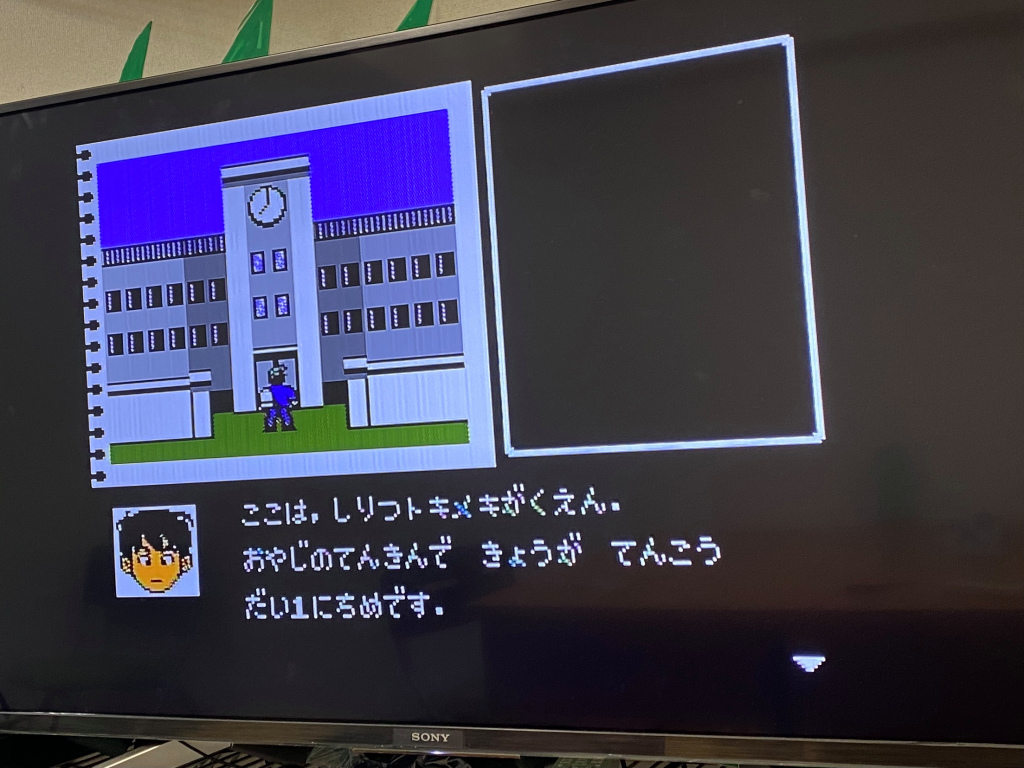 The on-screen graphics and text told her that she was playing as a teen boy transferring to a new high school. “I’ve transferred here because we had to move for my dad’s job,” the character explained, “and today is my first day,” As Ikuna hit the button to advance the text, she wondered what sort of colorful classmates she’d meet, when suddenly… 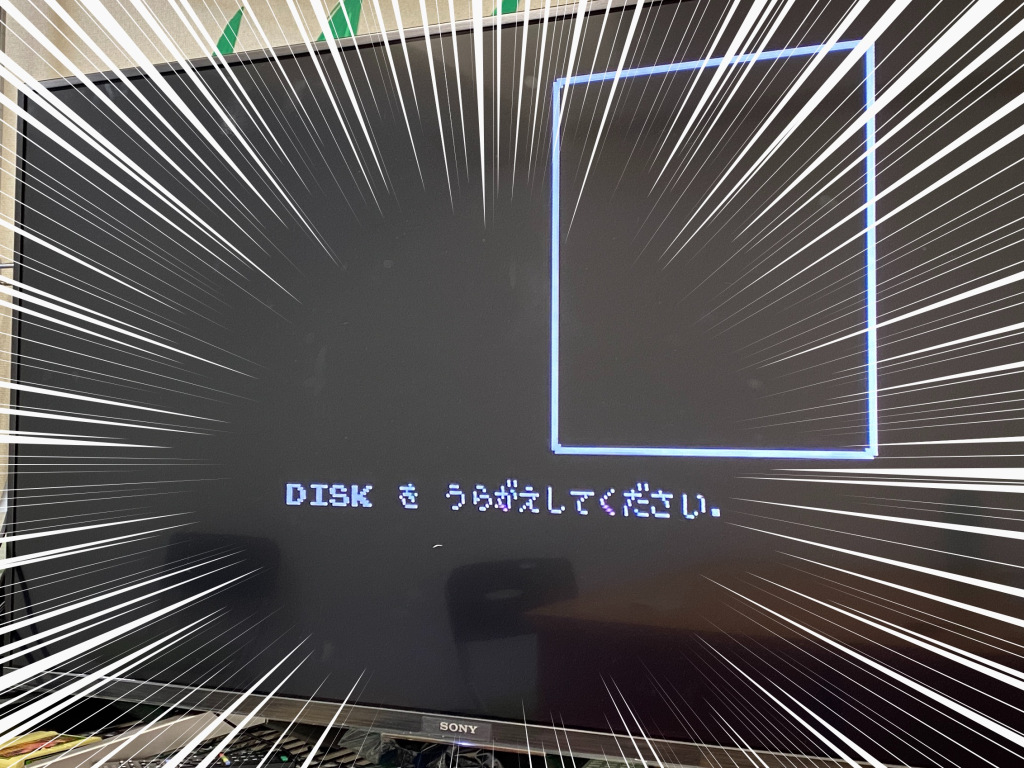 …a message popped up telling her:

“Please turn the disk over.”

FDS disks are double-sided, and so Ikuna had figured she’d be prompted to flip it at some point during the game. She’d been playing for less than 30 seconds, though, and didn’t expect the flip-over point to come so soon. Thankfully, this didn’t mean she was already half-way through a game that was only going to be 60 seconds long. Instead, it seems that the disk’s A side has various data that has to be loaded in for the game to get started, then draws data from the B side while you’re actually playing. She also had to flip the disk back over to Side A every time she wanted to save her game. 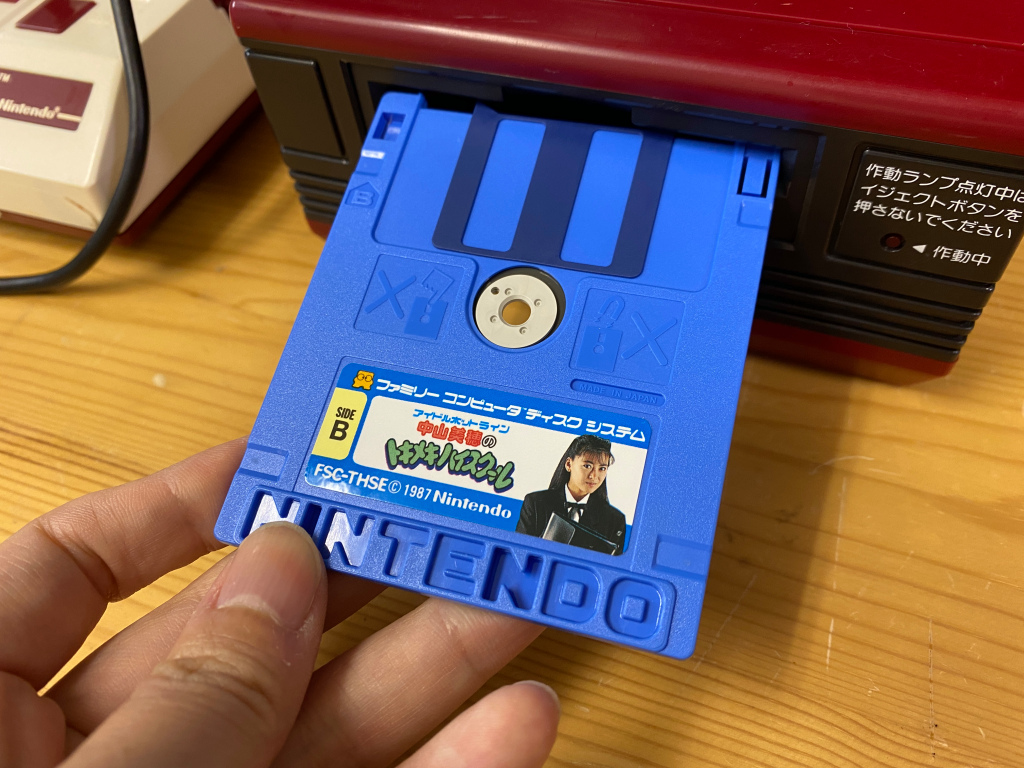 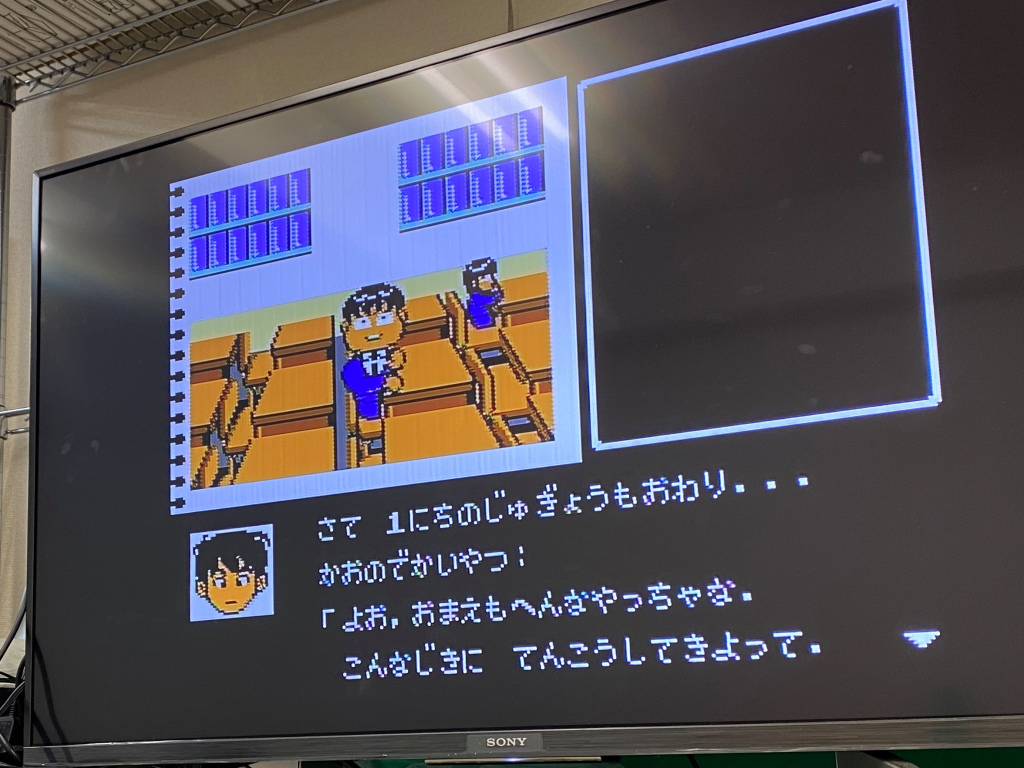 As she settled into the gameplay, she soon learned that Idol Hotline-Nakayama Miho no Tokimeki High School is a classically styled romance simulator with a high school setting. Before long, she met the geeky but outgoing male friend character (shown in the screen above where he’s referred to as “dude with a huge face”) that pretty much all titles in the genre are required to have, followed by a beautiful and mysterious female classmate named “Mizuho,” though Ikuna quickly saw through her Clark Kent-style disguise and deduced that she’s actually Nakayama attending high school while keeping her famous idol status secret from everyone else. 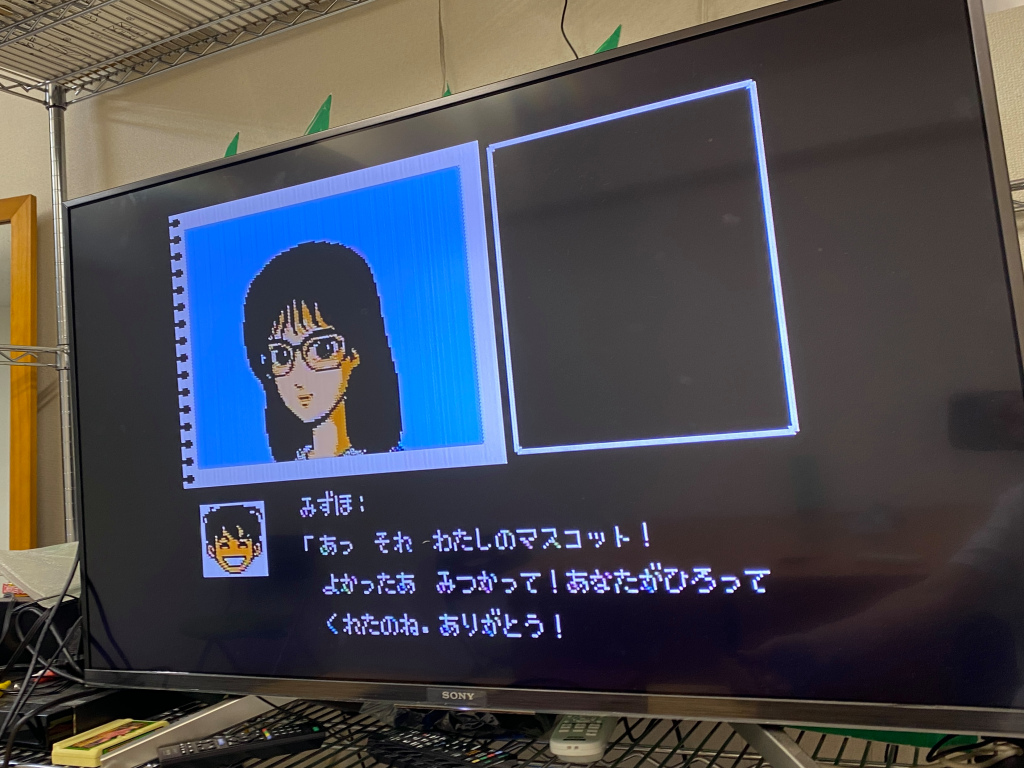 But as Ikuna was smiling at the quaintly familiar plot beats, she remembered that this game came out all the way back in 1987! That’s seven years before 1994 PlayStation game Tokimeki Memorial would become a hit and really bring romance simulators into mainstream console gaming, and she was impressed to see such an early example of the tropes and story beats that would go on to be so influential and prevalent in the genre.

Idol Hotline-Nakayama Miho no Tokimeki High School even has some uniquely ambitious gameplay mechanics. The “hotline” part of the title refers to how at certain points in the game, telephone numbers will flash on screen, along with a suggestion to write them down. 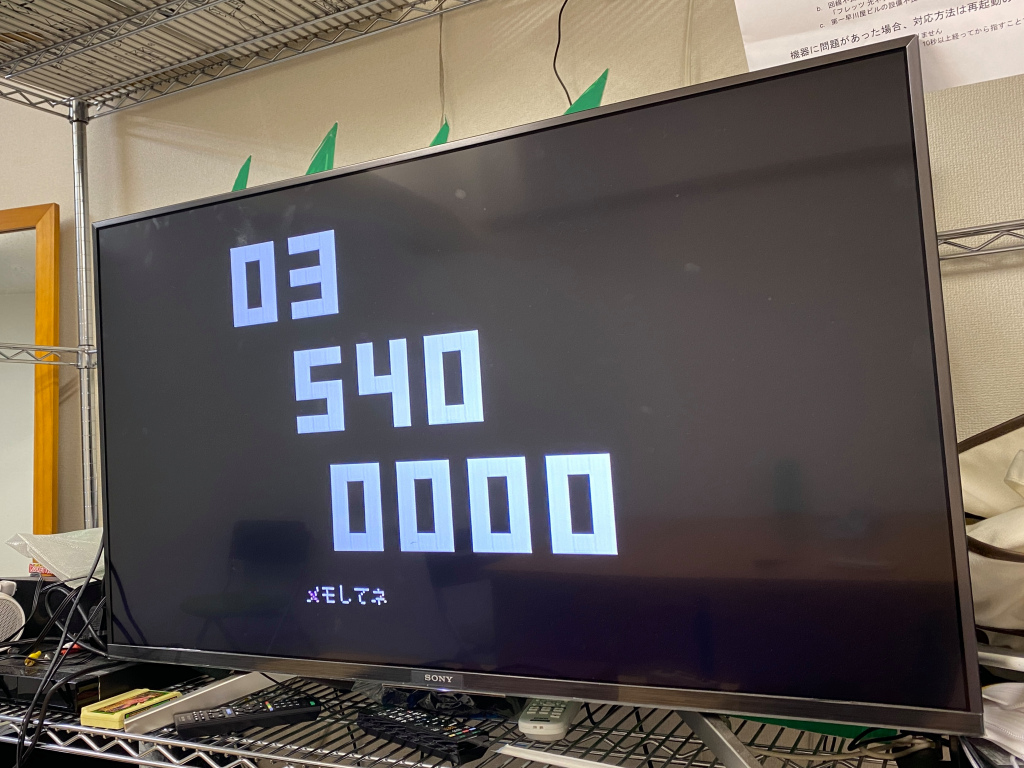 Calling these numbers would let you hear recorded messages from Nakayama herself, including hints about how to progress in the game. Not surprisingly, the number Ikuna came across is no longer in service, but she was still filled with admiration for the team that had come up with the idea in the first place. “They must have been really clever designers,” she thought, and it turns out they didn’t use up all of their talent on this one game either. Idol Hotline-Nakayama Miho no Tokimeki High School was a joint development between Square and Nintendo, and the staff included members such as Hironobu Sakaguchi, who went on to create the Final Fantasy series), Gunpei Yokoi, designer of the Game Boy, and Yoshio Sakamoto, who still works for Nintendo today and is currently producing the upcoming Metroid Dread.