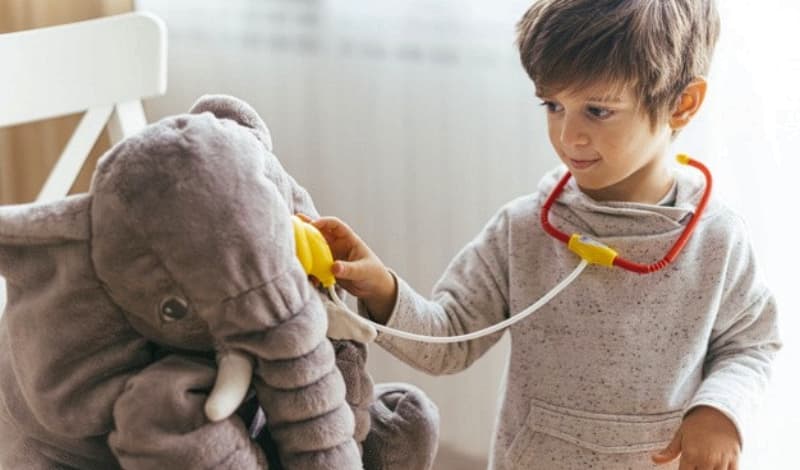 This is Greg. Remember we talked about him?” Jack says to his infant grandson in the 2004 movie “Meet the Fockers.” Jack, played by Robert De Niro, holds up a flashcard featuring a female nurse wearing a knee-length dress and a small white cap.

The infant looks at Greg, whose career choice of nursing is a recurring joke throughout the movie trilogy, and immediately laughs.

“Sorry, Greg,” Jack says with a wry smile. “The card only comes in one gender.”

The gender stereotyping of certain jobs really does start at an early age, and those beliefs are shaped by everything from movies, TV shows and books, to a child’s socio-economic conditions, gendered socializations, and parental expectations. Research studies dating back to the early 1900s have consistently shown that boys most often identify public individuals or fictional characters as their heroes, whereas girls identify heroic individuals based on who they personally know, such as a teacher or doctor. Today, vastly more boys than girls report that athletes, movie stars and singers are their heroes, and a significant percentage of boys from low socio-economic backgrounds say they aspire to work in media, culture and sports occupations.

With distance learning now in full swing, and children spending an inordinate amount of time consuming digital media, parents might consider embedding a bit of career counseling into their kids’ at-home education. Particularly for their sons.

That lesson should start with the following statement: Caring for other people is every bit a masculine trait as it is a feminine one.

We are living in a giant teachable moment, and it’s not hard to find examples of real-world heroes to take inspiration from. They don’t wear capes or cowls, but they do don masks, scrubs, and even the occasional face shield. They work in hospitals, health clinics, and nursing homes, and their superpowers are rooted in science and compassion. You want a fulfilling adventure, junior? Become a nurse!

There has been a concerted effort for years now to close the STEM gap by helping more girls and women pursue careers in the fields of science, technology, engineering and math. Men outnumber women in some of these areas by a 3-to-1 margin, and sometimes even more. However, we must also invest in closing the “caring” gap, meaning the gender disparity in professions rooted in the care of others: nursing, social work, and education, to name just a few. Men are significantly underrepresented in each of these fields, which further perpetuates the false belief that caring for other people is somehow “women’s work.”

According to the Massachusetts Department of Public Health, fewer than 7 percent of registered nurses in the state are men. The percentage of male nurse practitioners is even less. The U.S. Department of Labor reports that fewer than 20 percent of all social workers nationwide are men, which is the same percentage as male psychologists.

And in our schools, where educators are often among a child’s first role models, male teachers are generally hard to come by. In Massachusetts, where 51 percent of all public school students are male, men account for just 1 out of every 4 public school teachers. At the elementary school level, the number is only about 10 percent. Why does this matter? Because teacher representation — be it race, ethnicity and/or gender — can have a subtle yet powerful influence on the success of certain students. As is the case with positive media representations, seeing it is the first step toward being it.

For better or for worse, parents these days have a captive audience of students at home. So turn off Disney+ and talk to your boys about real-world superheroes. Go online together and read stories about the incredible work nurses are doing in hospitals and health centers throughout the world. Lead a dinner discussion about the countless ways teachers continue to support, encourage and inspire the children in their charge. Help your sons appreciate that taking care of other people is a career choice worthy of all people.

Dr. Jeff Lemberg is the founder and executive director of Boys for the Better, a Boston-area nonprofit organization that provides social and emotional learning programming for male-identifying students through the use of media literacy education.

This post was previously published on A Parent Is Born and is republished here with permission from the author.
—

If you believe in the work we are doing here at The Good Men Project and want to join our calls on a regular basis, please join us as a Premium Member, today.

Need more info? A complete list of benefits is here.

Talk to you soon.