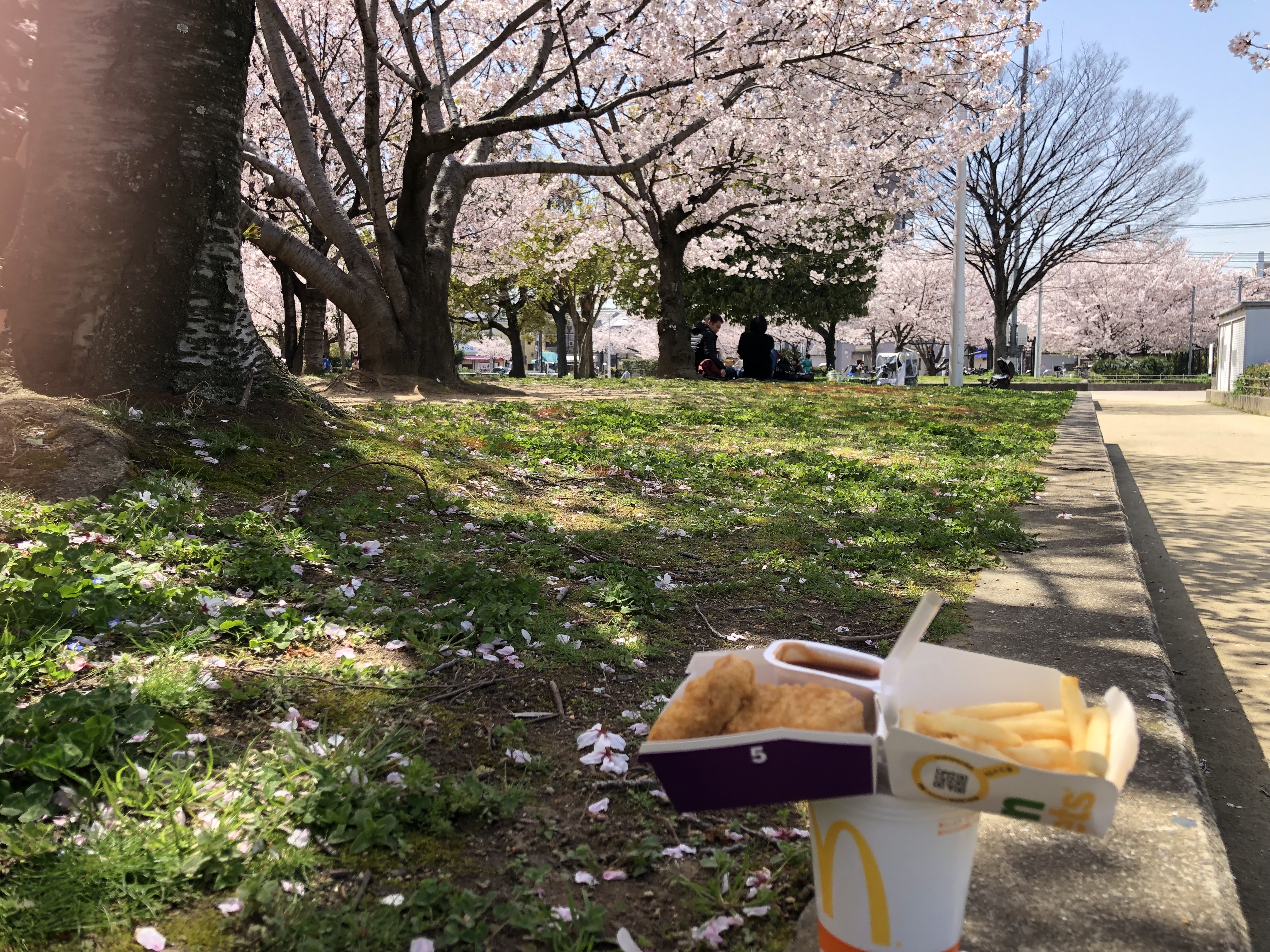 You deserve a break today.

Every spring cherry blossoms bloom for a preciously short time in Japan. It’s exactly that fleeting beauty that makes them so appreciated as symbols of the transience of life. However, in this current work-a-day world it can be hard to find the time to enjoy them properly with a full cherry-blossom viewing picnic, known as a “hanami” in Japan.

As luck would have it, just as this cherry blossom season was starting to kick off, an interesting McDonald’s hack started trending on the Internet in Japan. It’s not a new one, and even got the endorsement of McDonald’s UK back in 2019.

Who else is giving this a try? pic.twitter.com/6gtcoA7Gwt

The way it works is incredibly simple: Just spear the center of a Chicken McNuggets box with the straw of your drink, place the fries in the lid, and congratulations! You now have a one-handed combo.

Actually, this little hack has been spreading around recently as a great way for drivers to eat on the go. But that doesn’t mean it can’t equally be useful to sneak out for a quick but meaningful hanami during my lunch break, so I decided to give it a try.

To do this some nuggets, fries, and a drink were needed, and based on the Japanese menu, the easiest way to get all this is with a Chicken McNuggets Happy Set. McDonald’s Japan also sells a combo called a PoteNage, but at the time of this writing they were only selling extra-large versions of it, and I would have ended up with more nuggets and fries than I could handle single-handedly. 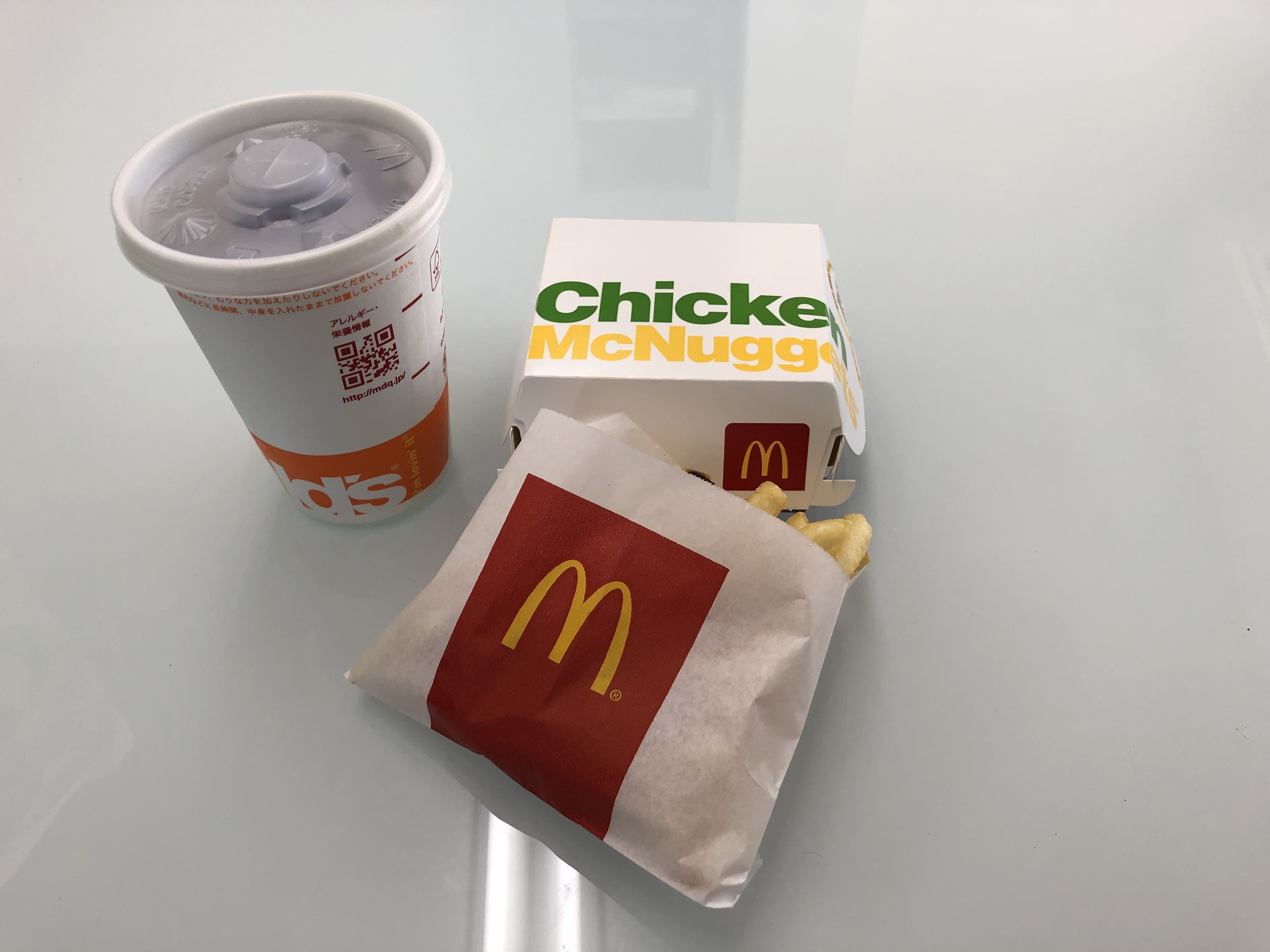 I set it up like the Tweet above and it worked like a charm. Considering this was a Happy Meal which comes with a small drink, this also means it would be even more solid when using a medium or large. 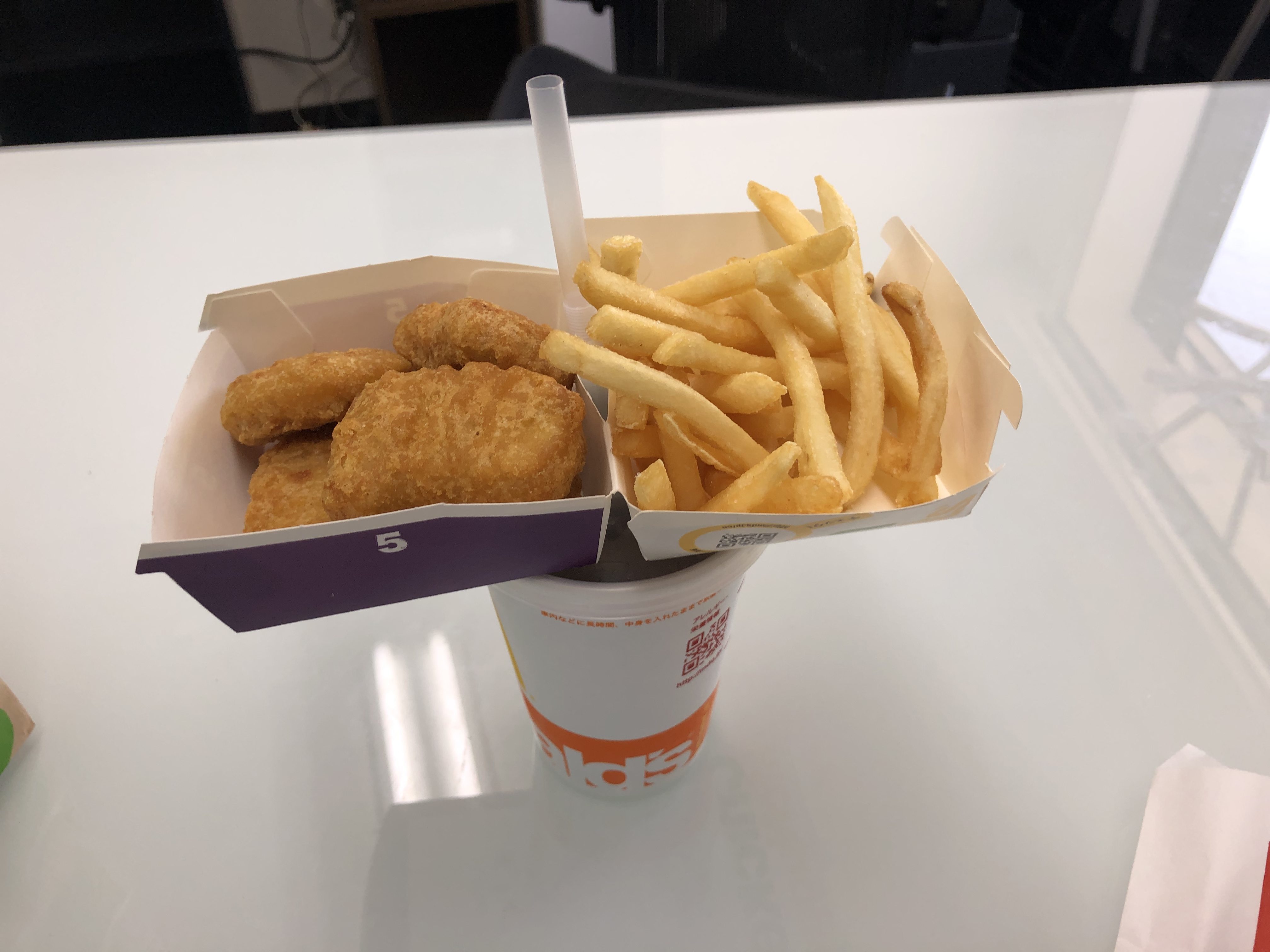 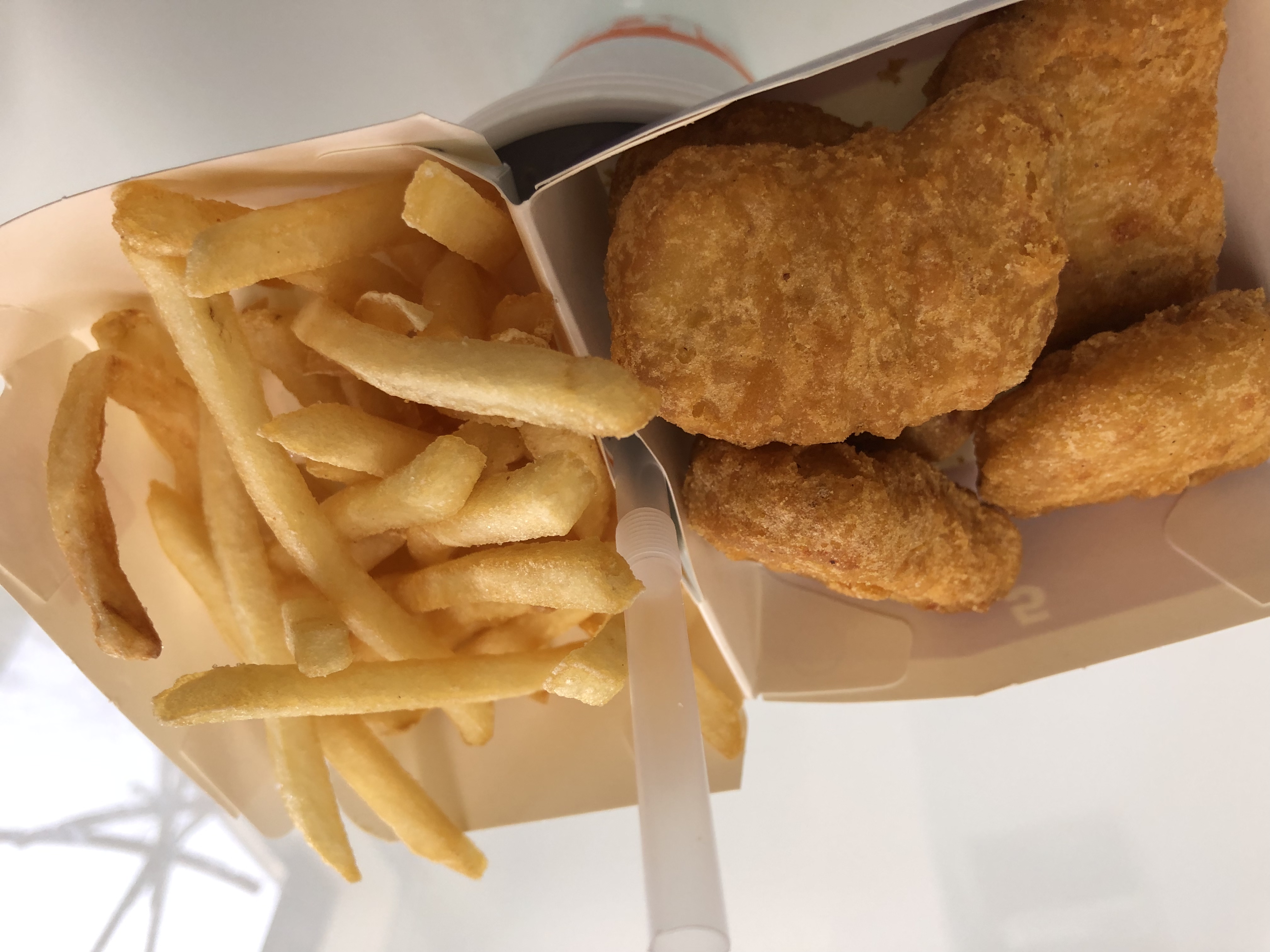 In addition, I found that the nugget box actually had two slits in the back, allowing me to adjust it to my liking. 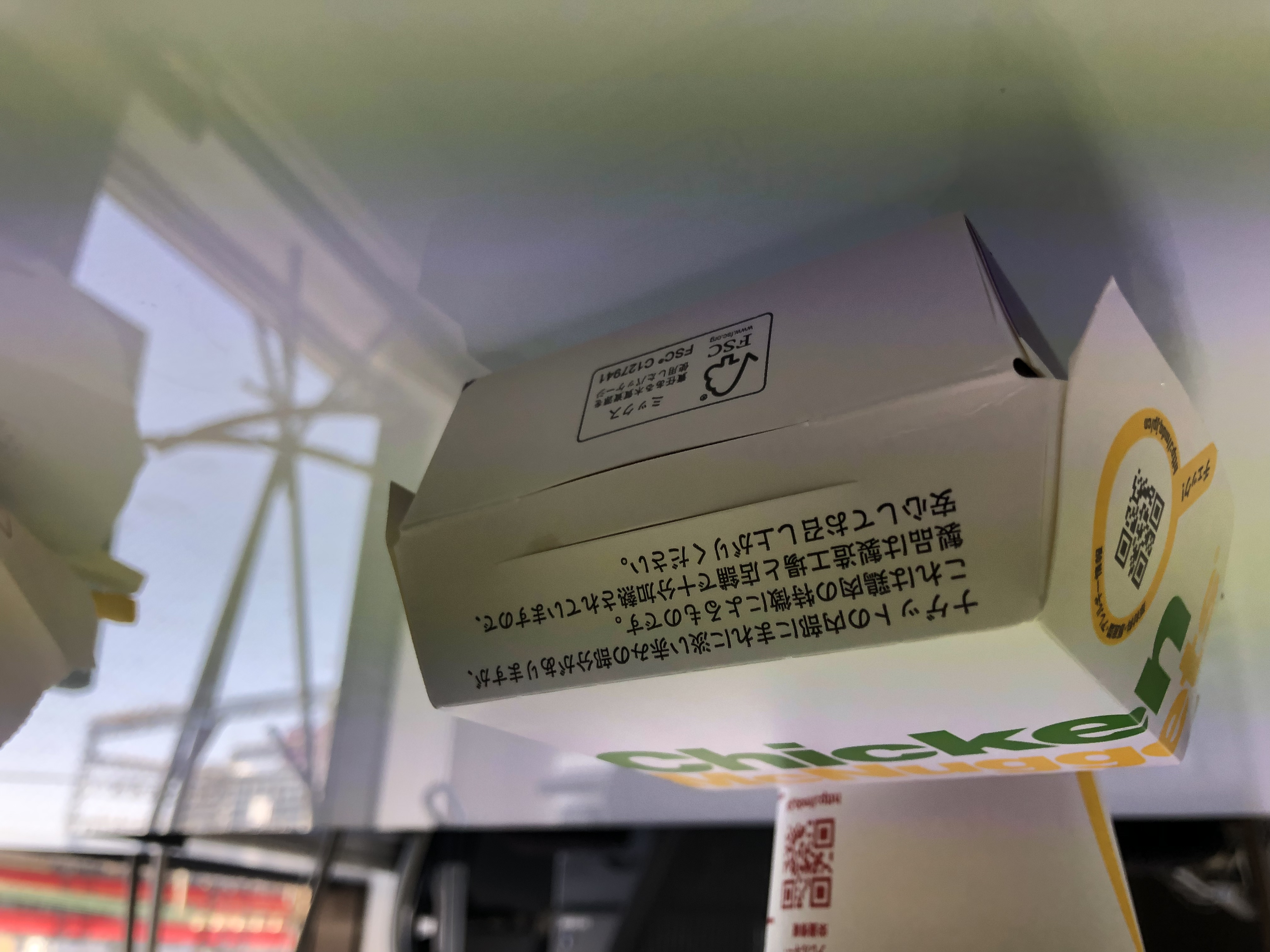 I liked the opening that wasn’t right on the crease of the box, because the straw seemed a little easier to drink from that way. 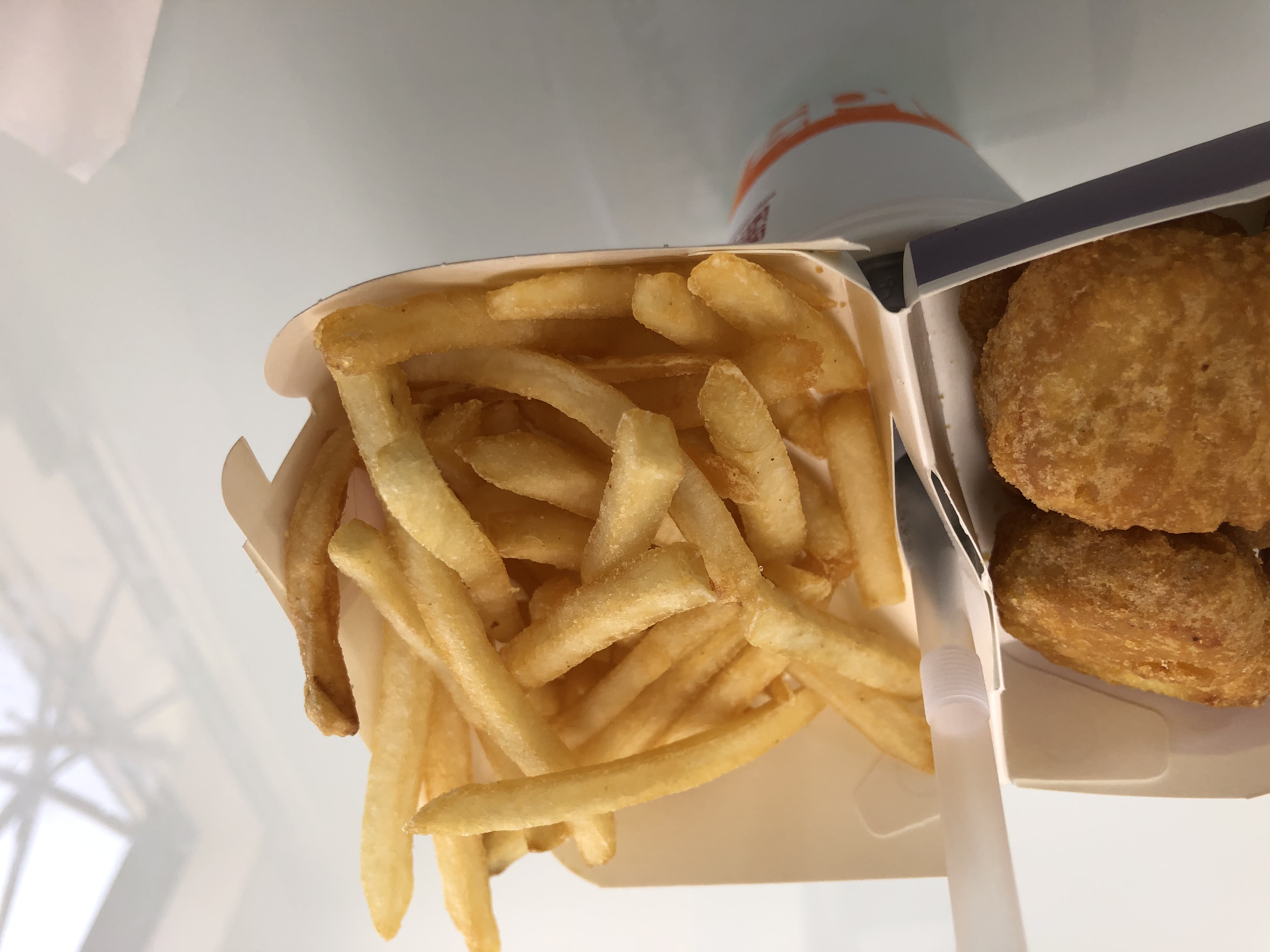 First I gave it an initial stress test, and it was all clear.

Feeling more confident in the structural integrity of this setup, I then added a sauce container. 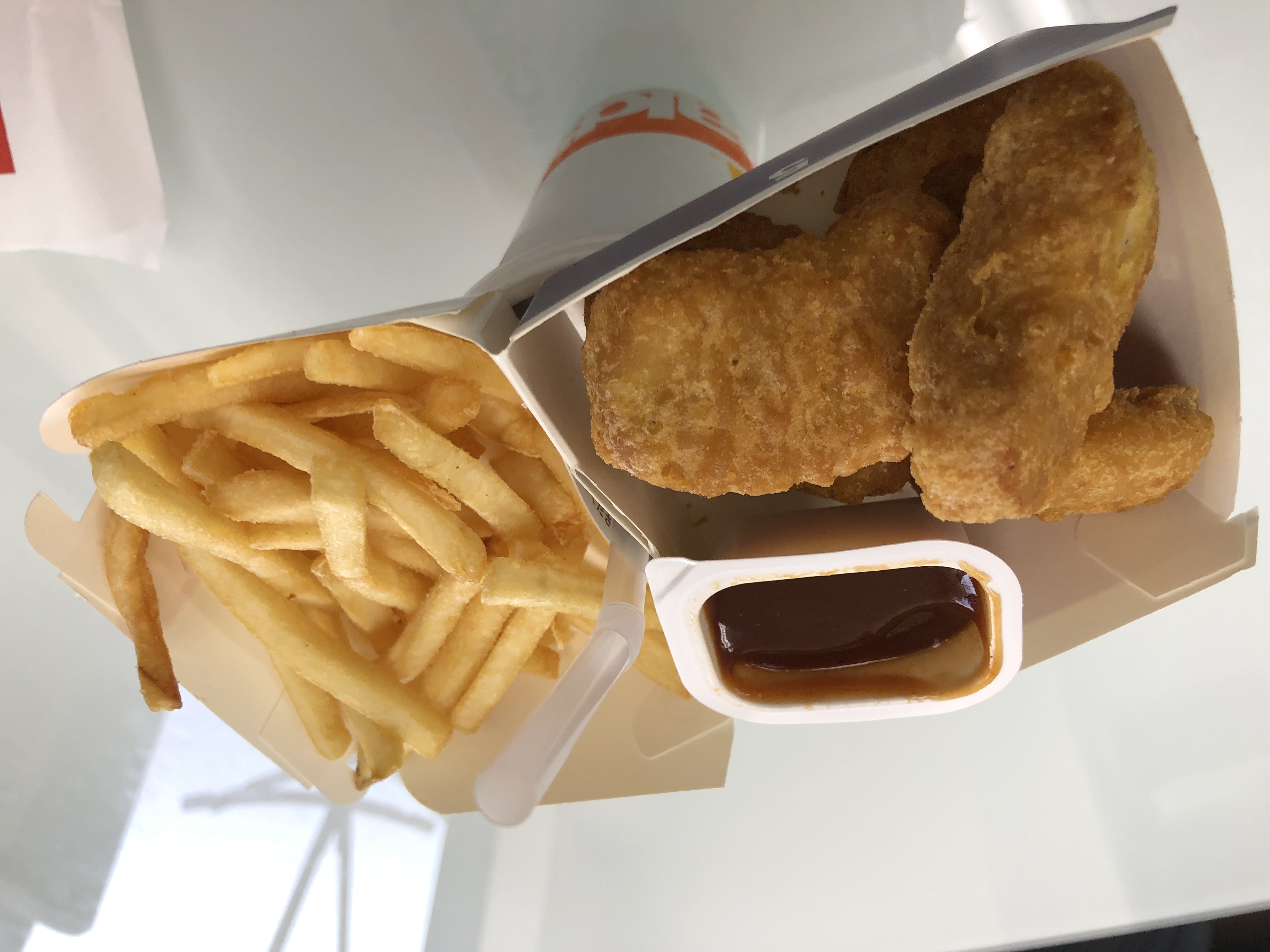 Truth be told, it was actually a lot sturdier than I imagined it would be, but one scary part about it was that the lack of friction between the straw and glossy card paper of the box made it rather easy to spin if you walk around corners too quickly.

Still, it certainly looked like it could handle the one-kilometer (0.6-mile) walk to the nearest park with cherry blossoms, so I headed out.

▼ My shaky hands were equal parts: fear of wasting food; trying to frame a shot with one hand while balancing a Happy Meal in the other and walking down stairs; and a poor diet

Walking down seven flights of stairs yielded no problems whatsoever. 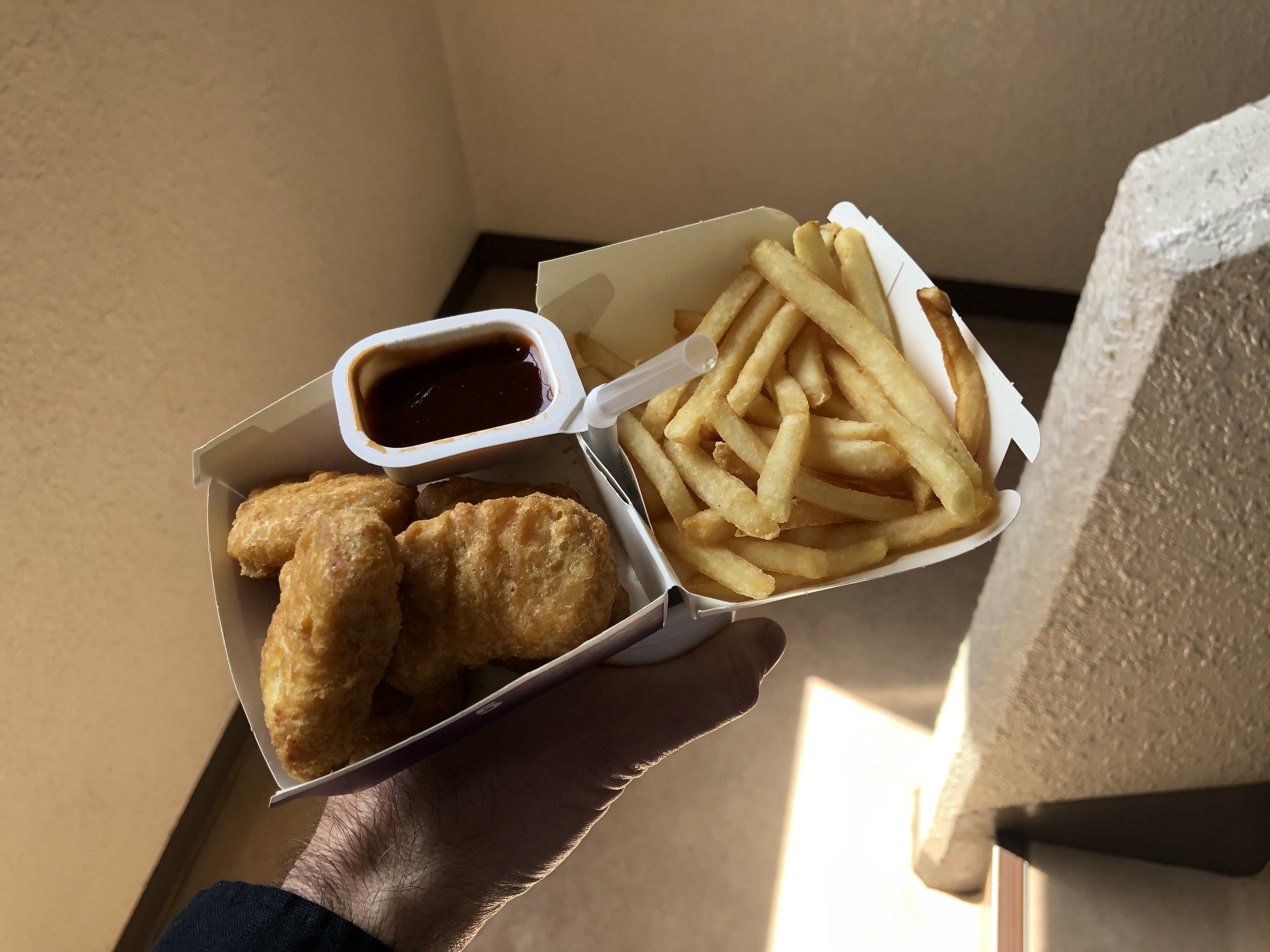 In the event that anyone else attempts this, it’s important to note that in Japan walking around the streets with open food is still considered somewhat rude. I think attitudes have relaxed about that a little in recent years, but I was certainly risking dirty looks from any elderly people who might have been out and about. 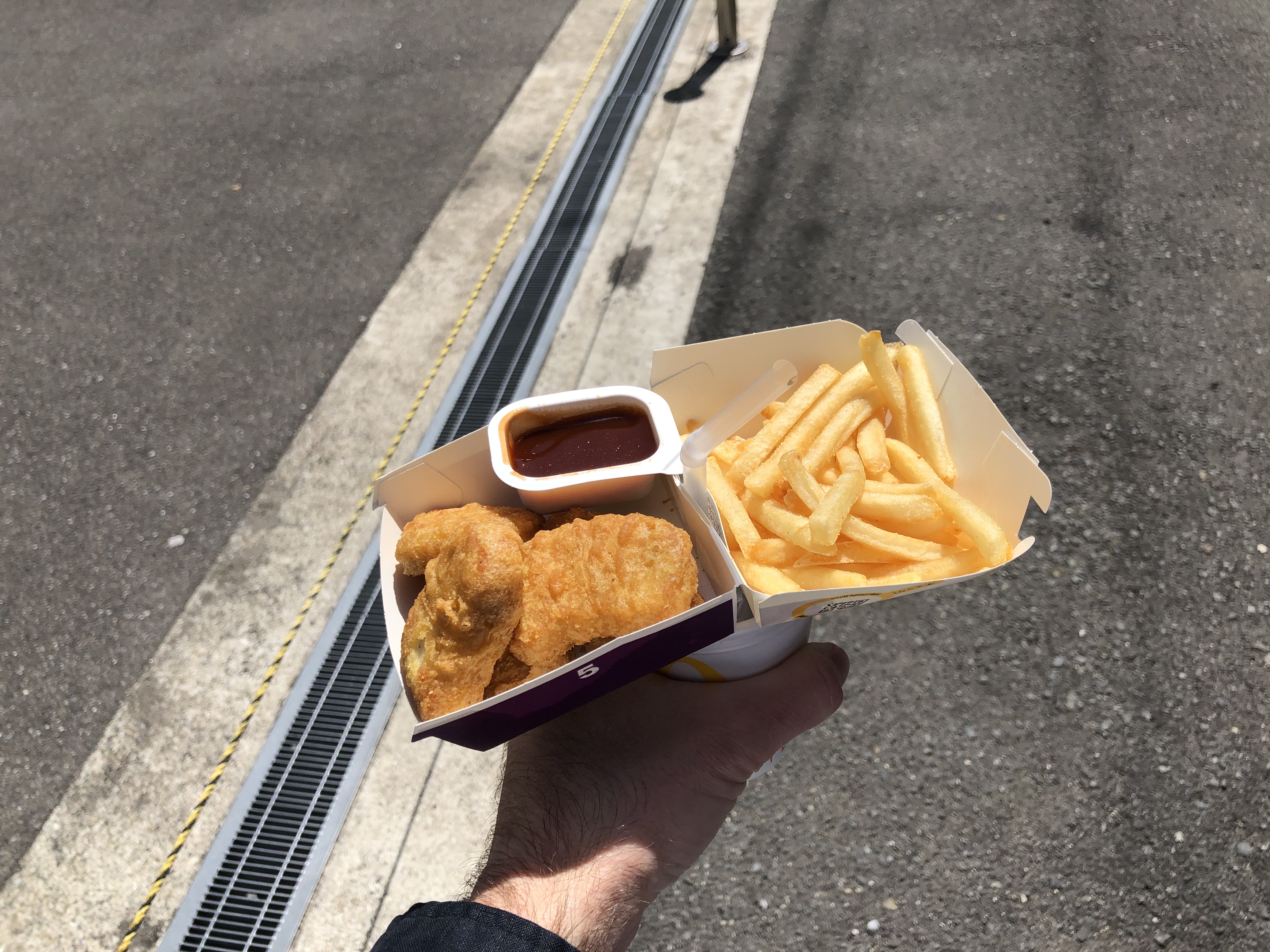 The one-handed Happy Meal, however, was going strong and shining defiantly in the sunlight. 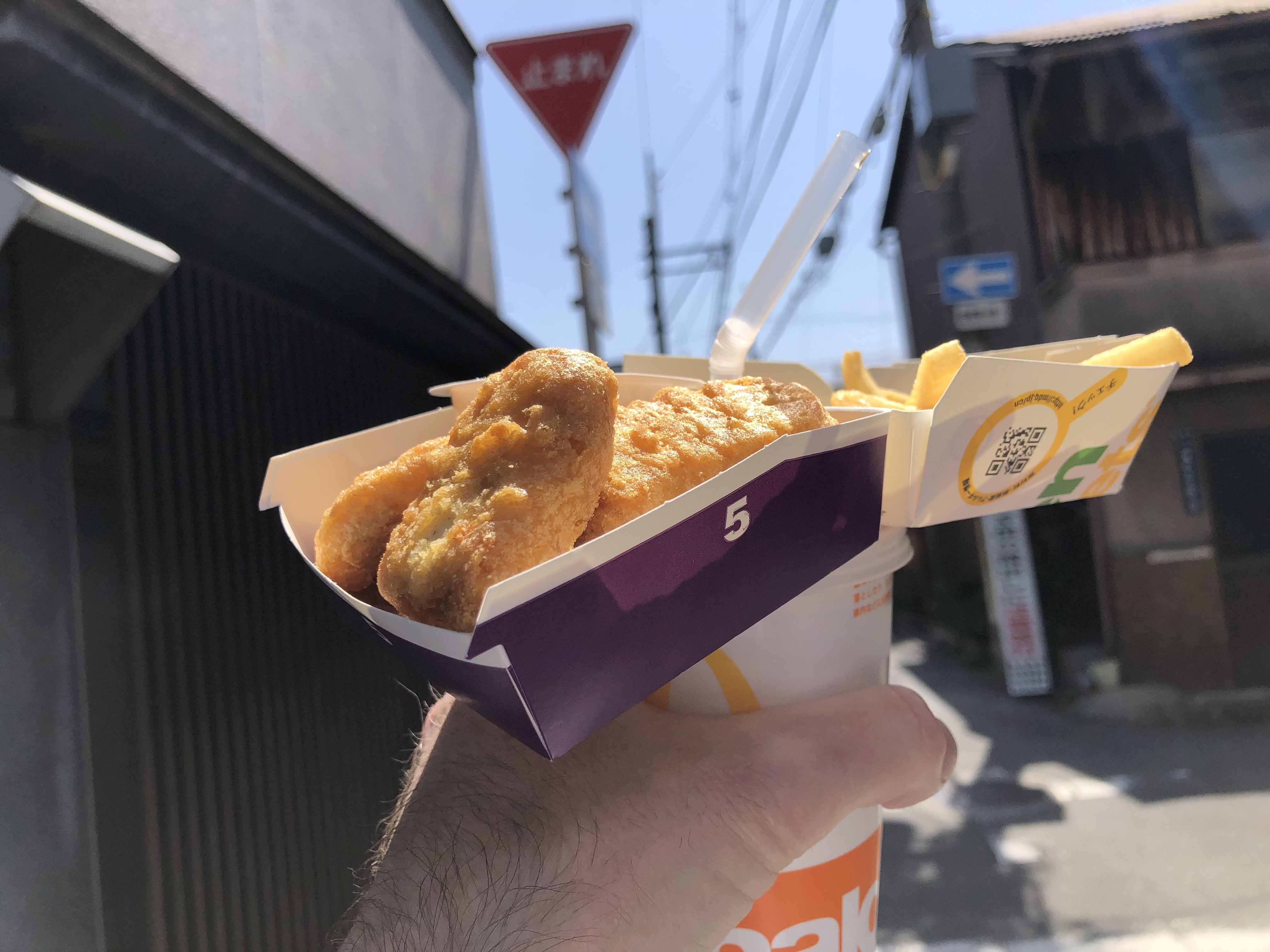 A short while later I had arrived! 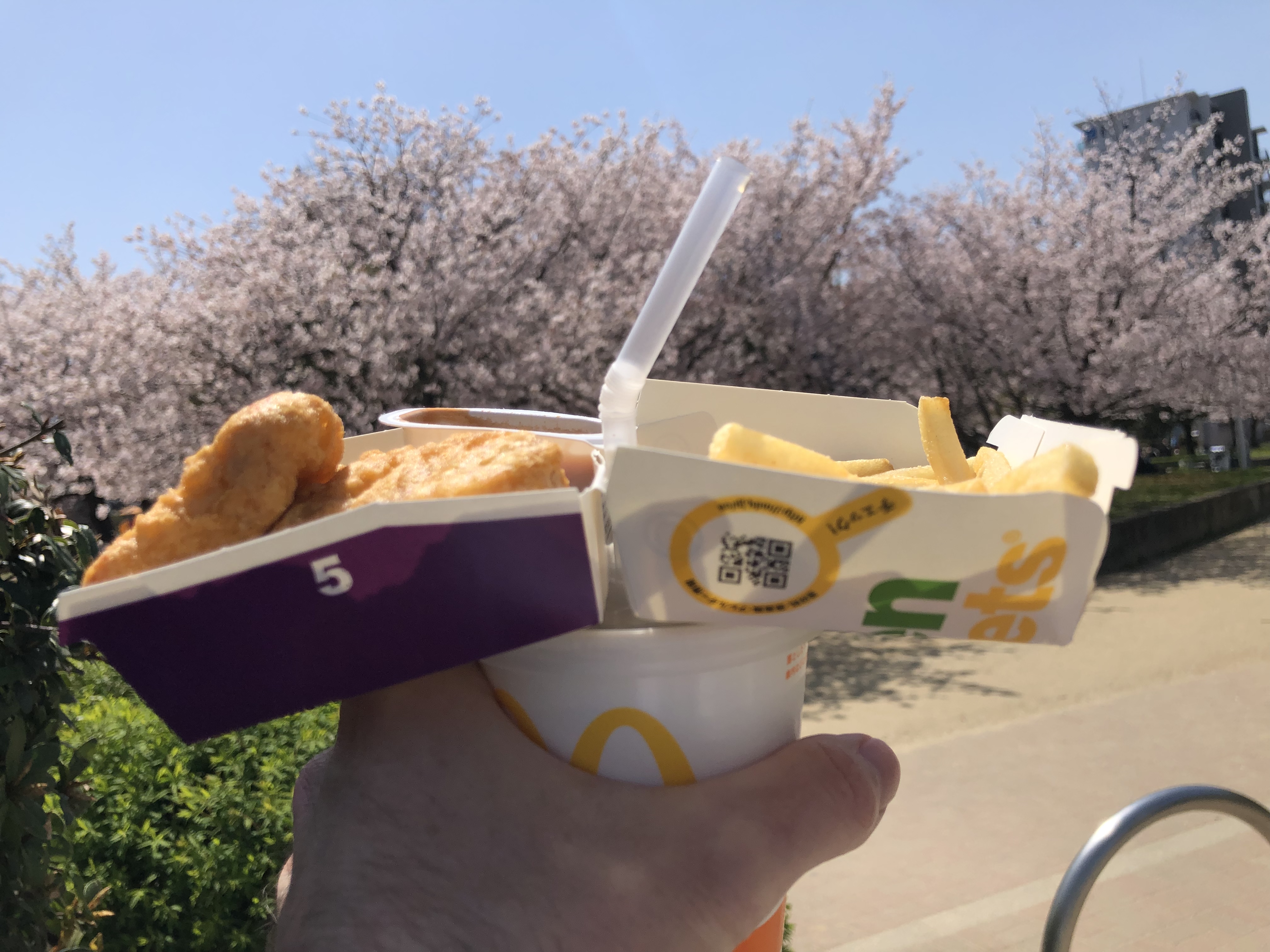 Since it was lunch time, there were a lot of people sitting under the blossoms and enjoying picnics. Luckily, with my ultra compact meal, I didn’t need to vie for any space and started eating right away. 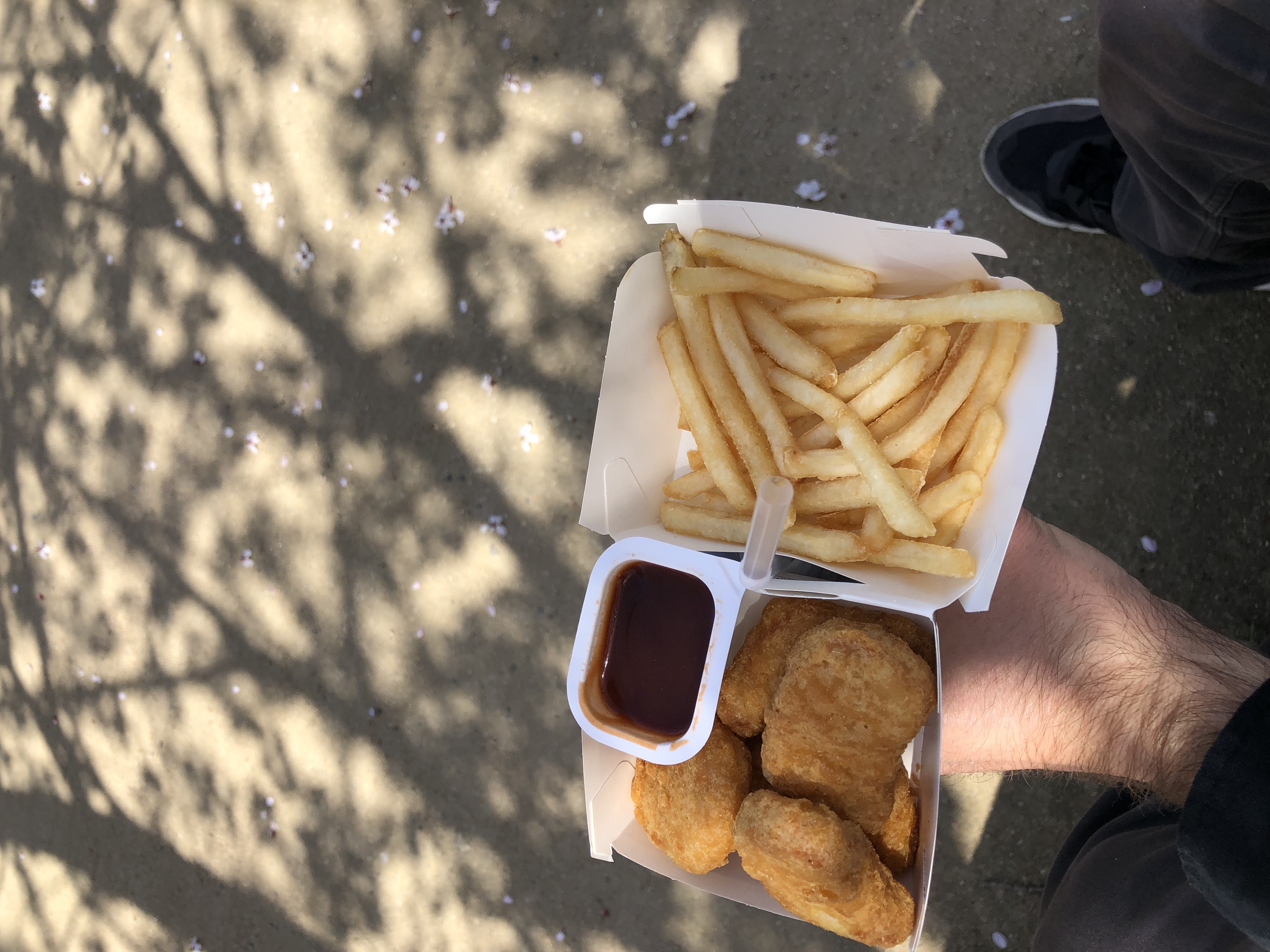 There were some unintended benefits to eating this way as well. The wide open food seemed to attract a lot of sparrows who all delightfully chirped around me, but remained too nervous to actually try and snag any of my food. 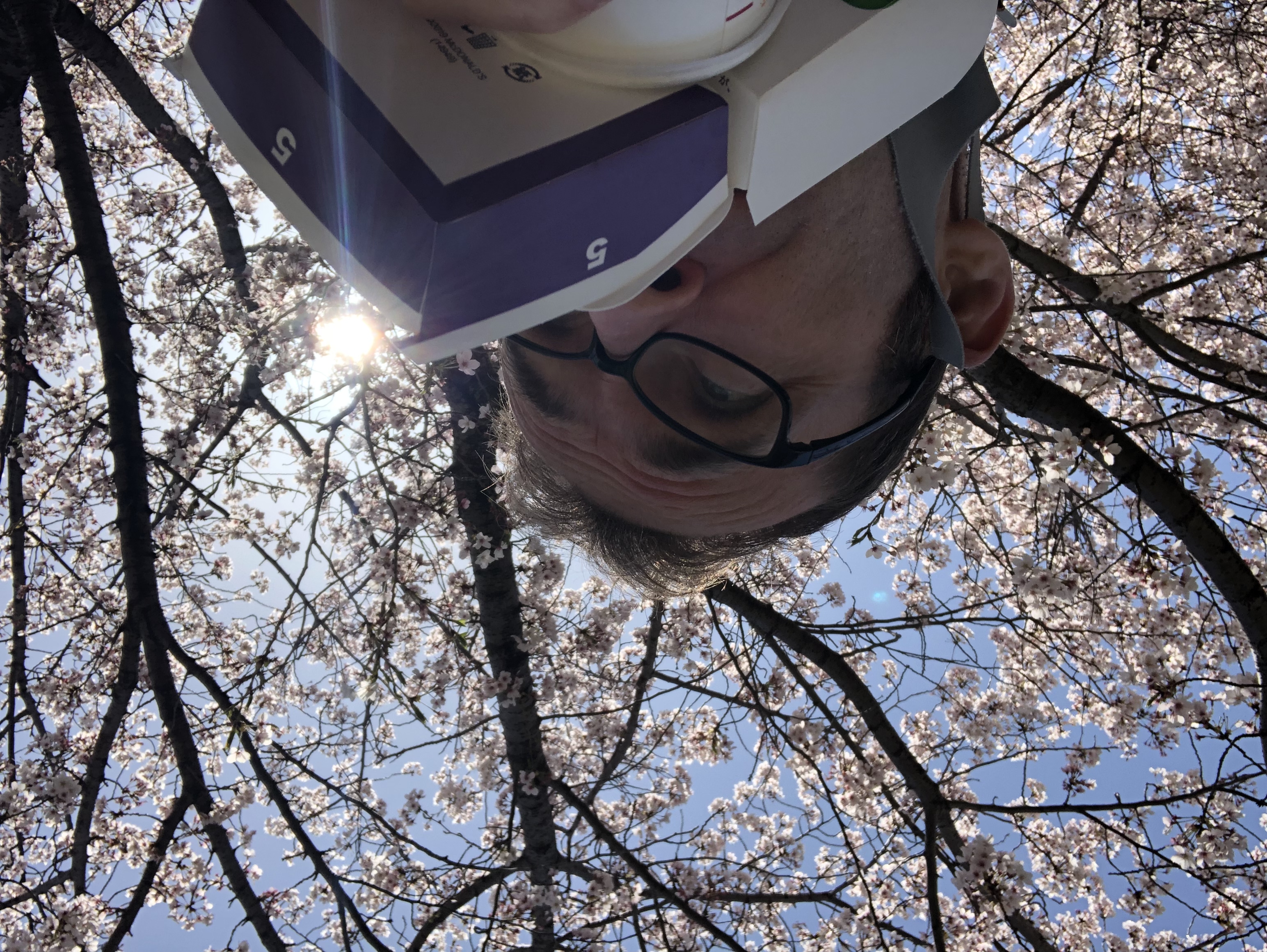 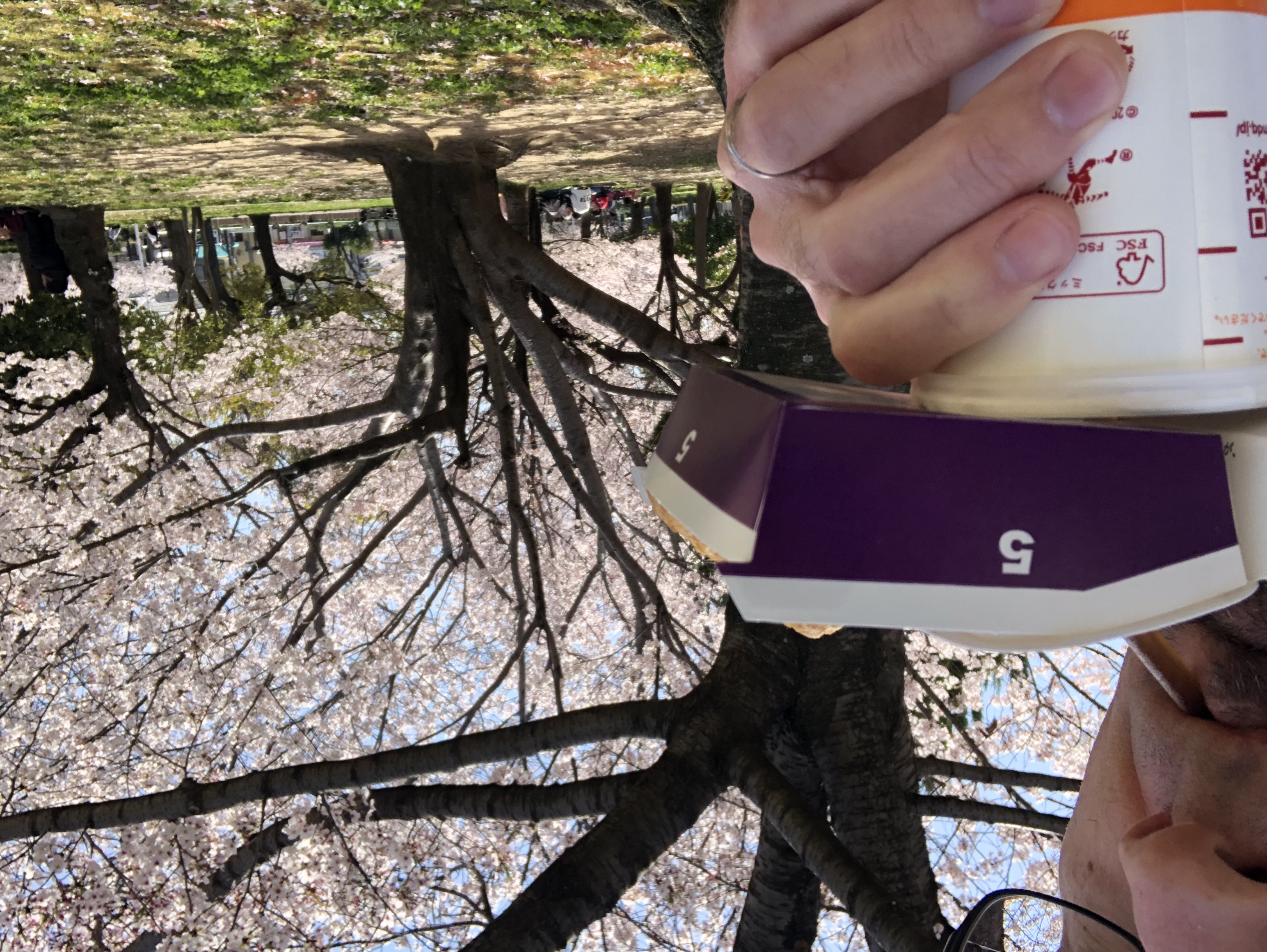 Speaking of snagging food, one of the most classic problems at a picnic are ants. No so here, though! Because all the food was hanging from the top of the cup, the ants couldn’t get at it. 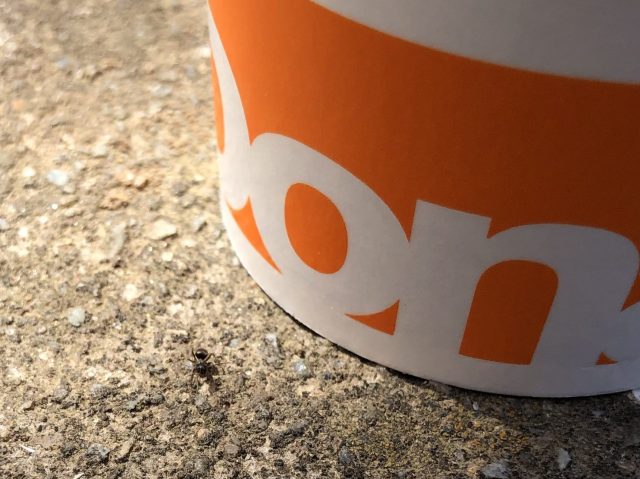 I was very satisfied with this makeshift hanami, and again this setup continued to impress after I finished. It can be hard to find public garbage cans around Japan which means you’ll need to deal with your garbage by yourself. 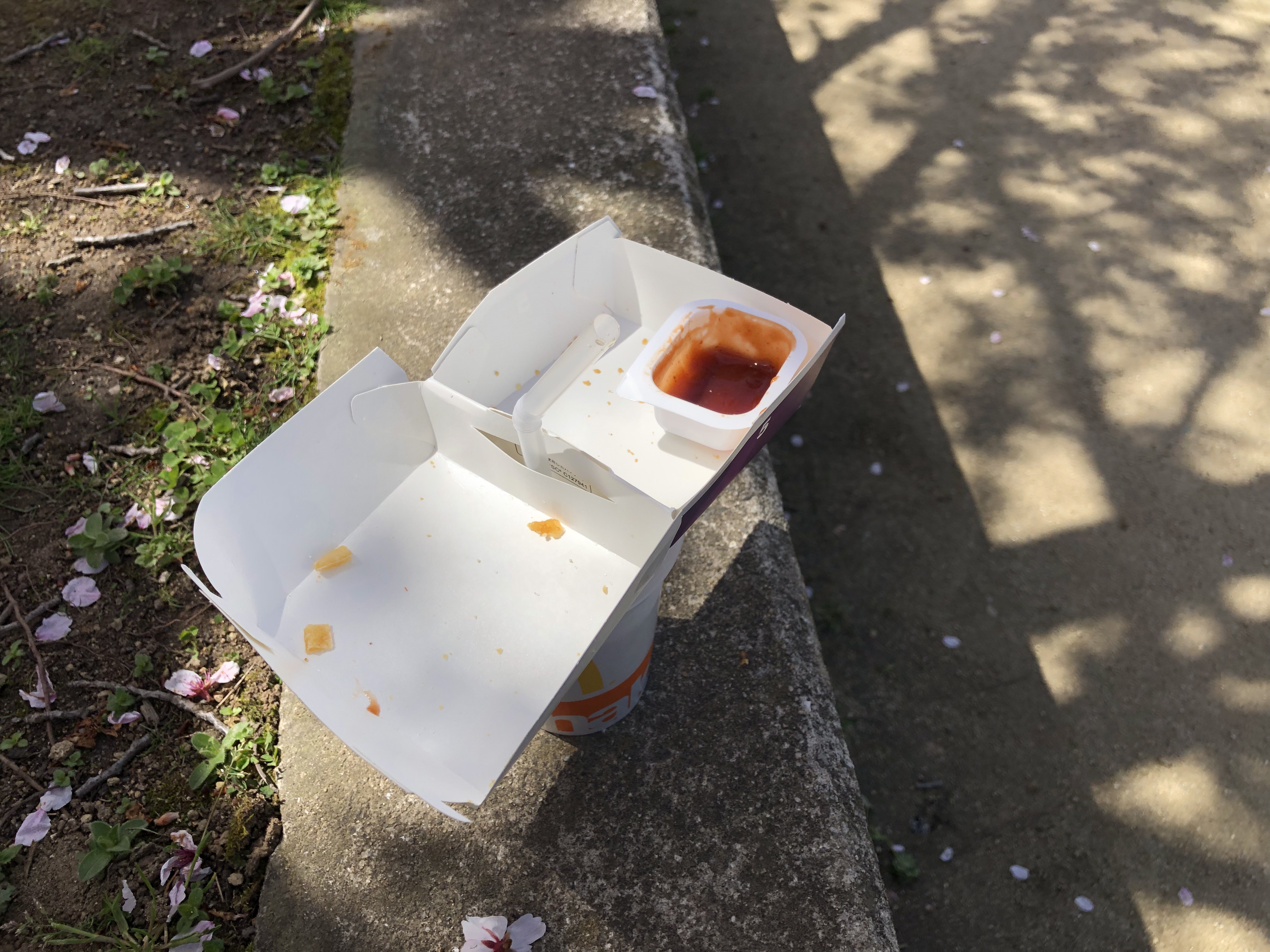 This time, however, it was not a problem… 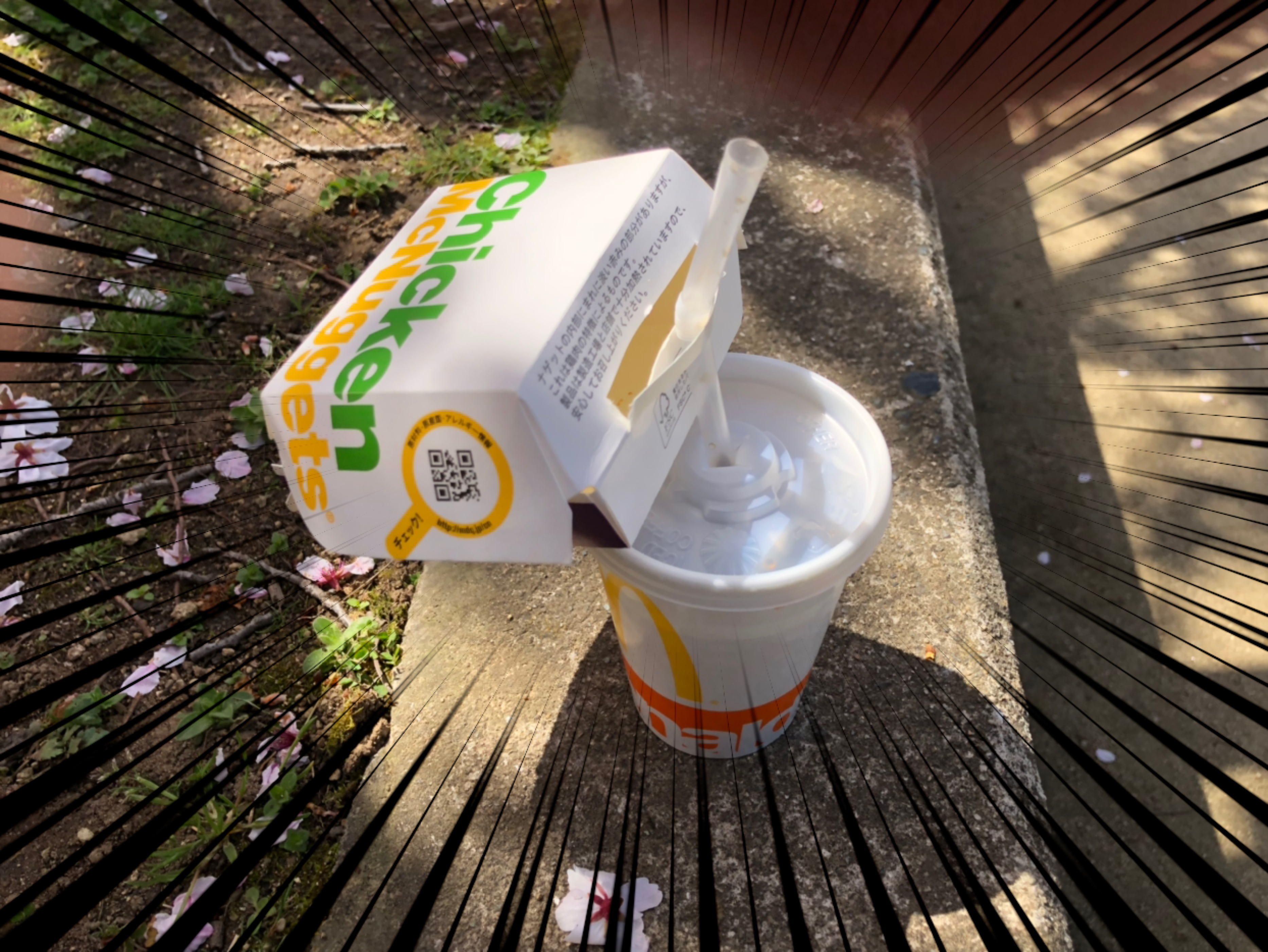 Since I had some cola left over, I could just hang the empty box on the straw and carry it as I finished my drink on the walk back. 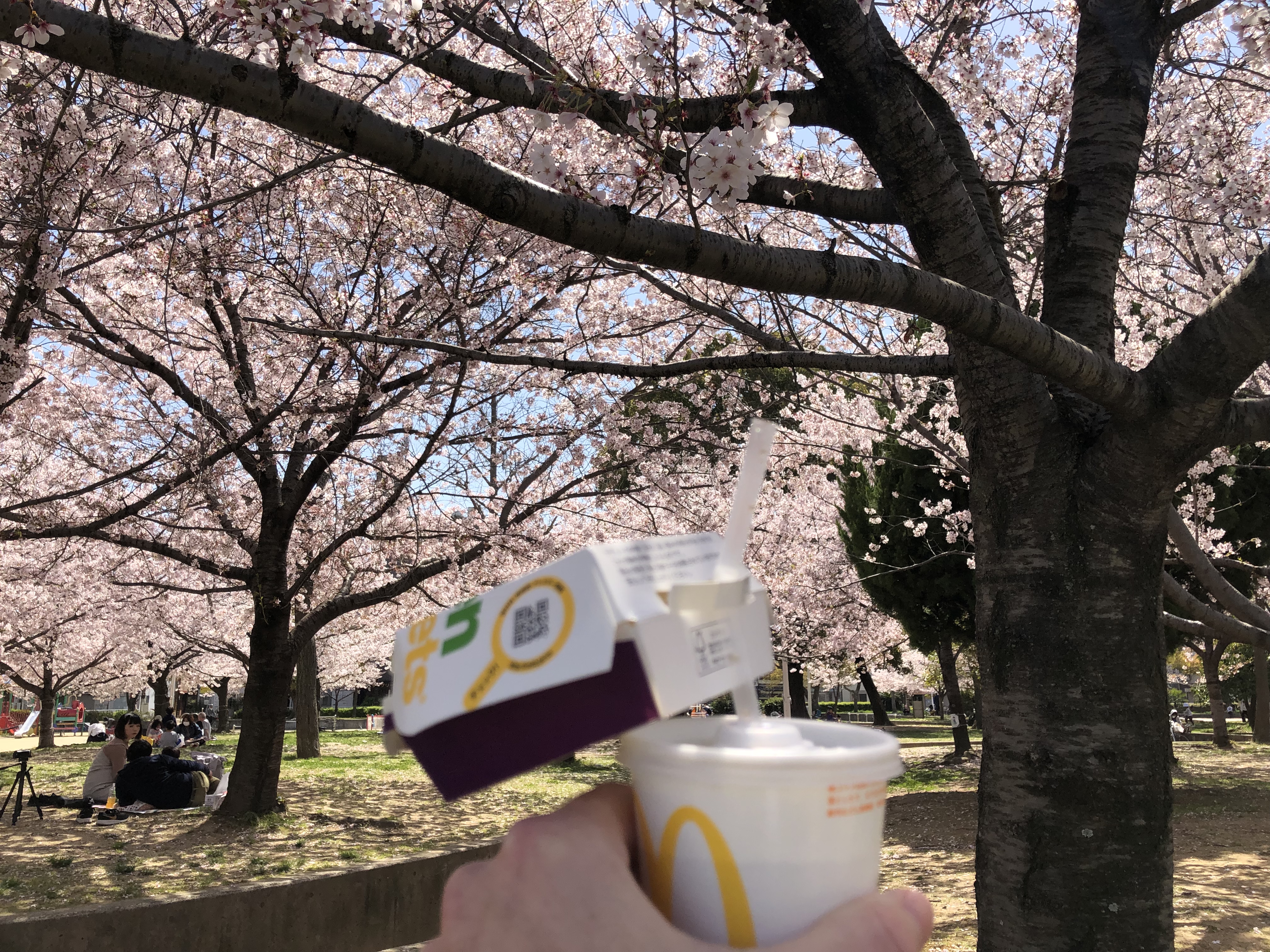 One word of warning though. Putting the straw through both slits seemed to be a little more than the box could bear and caused significant tearing. It was fine to get me back, but be sure to insert it carefully. Also, for those who think they could carry it that way with the food still inside, it’s highly unlikely that would hold. 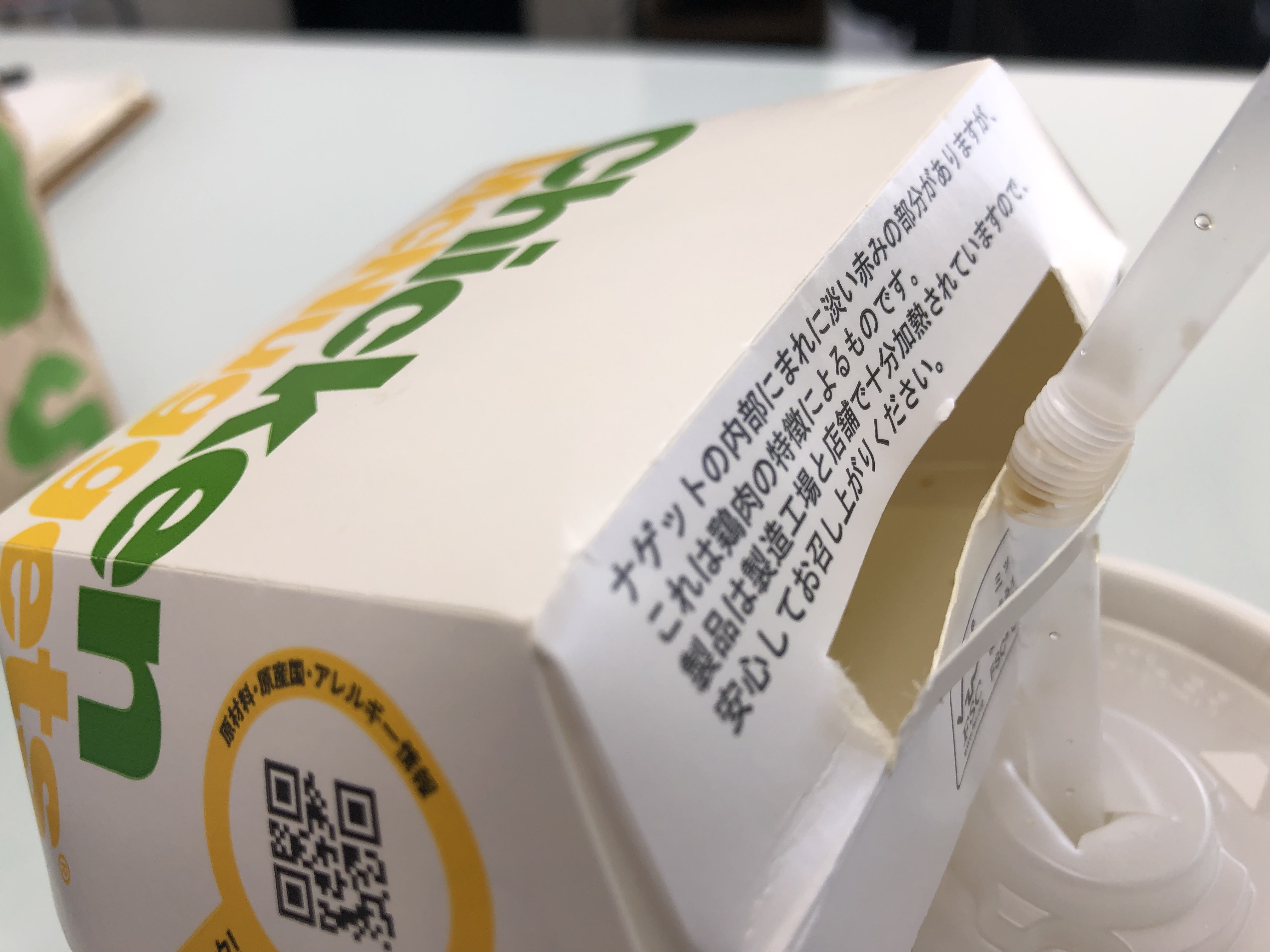 By the way, McDonald’s Japan also sells Petit Pancakes Happy Sets all day long which come in similar boxes, so I decided to see if they worked too. 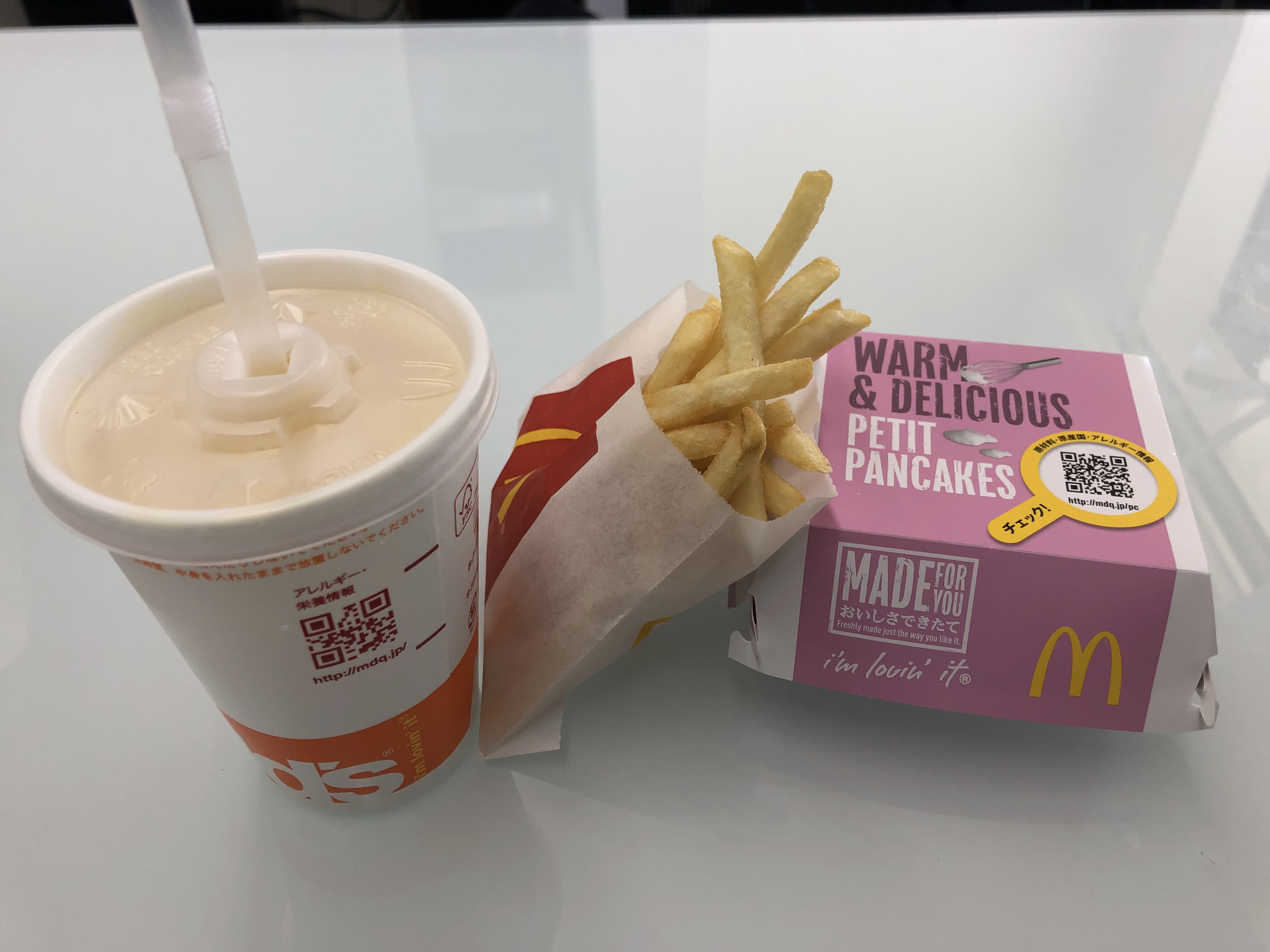 I tried the same setup with this meal and it worked just as well. The only difference was that the pancake box only had one slit. 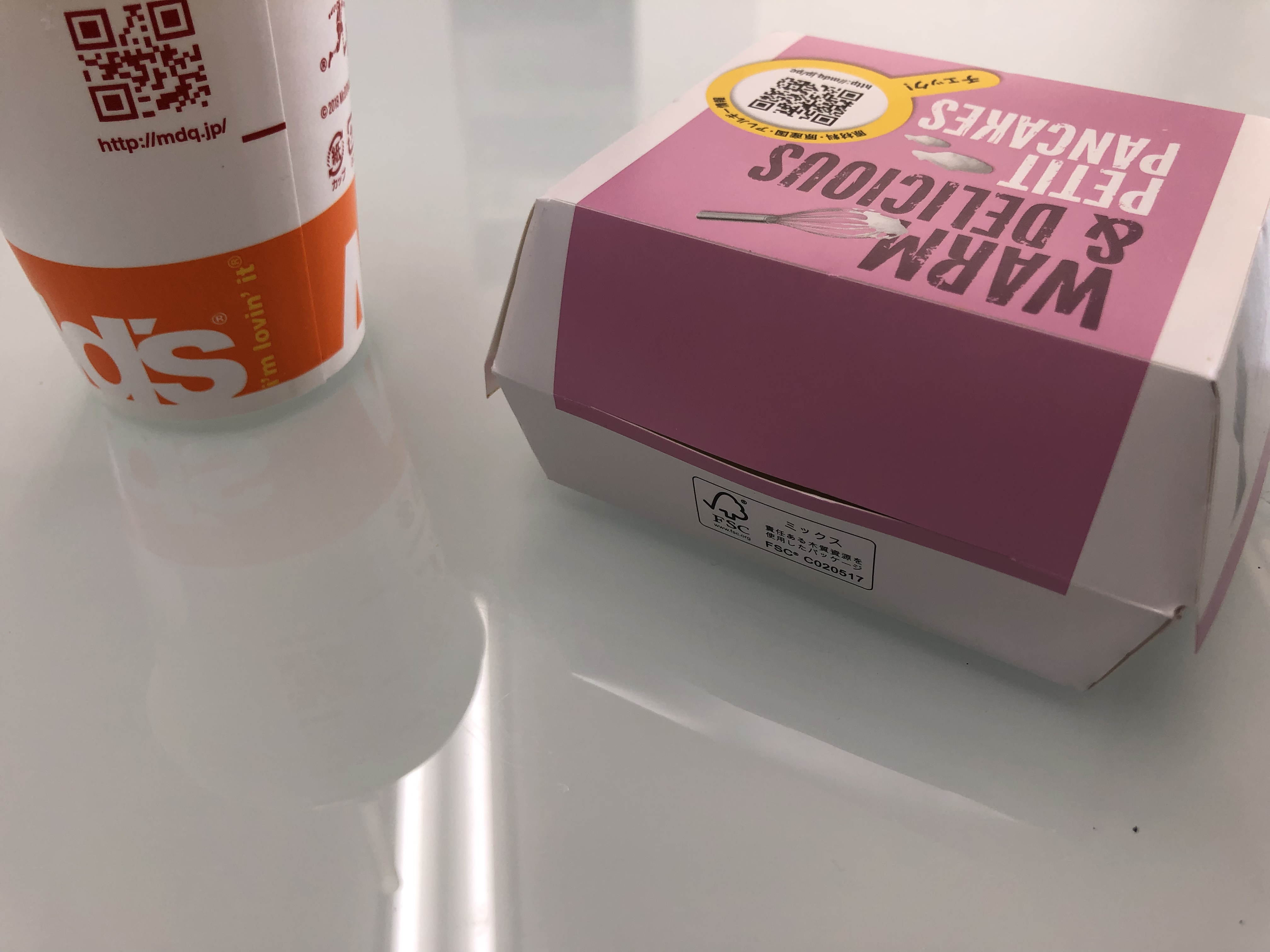 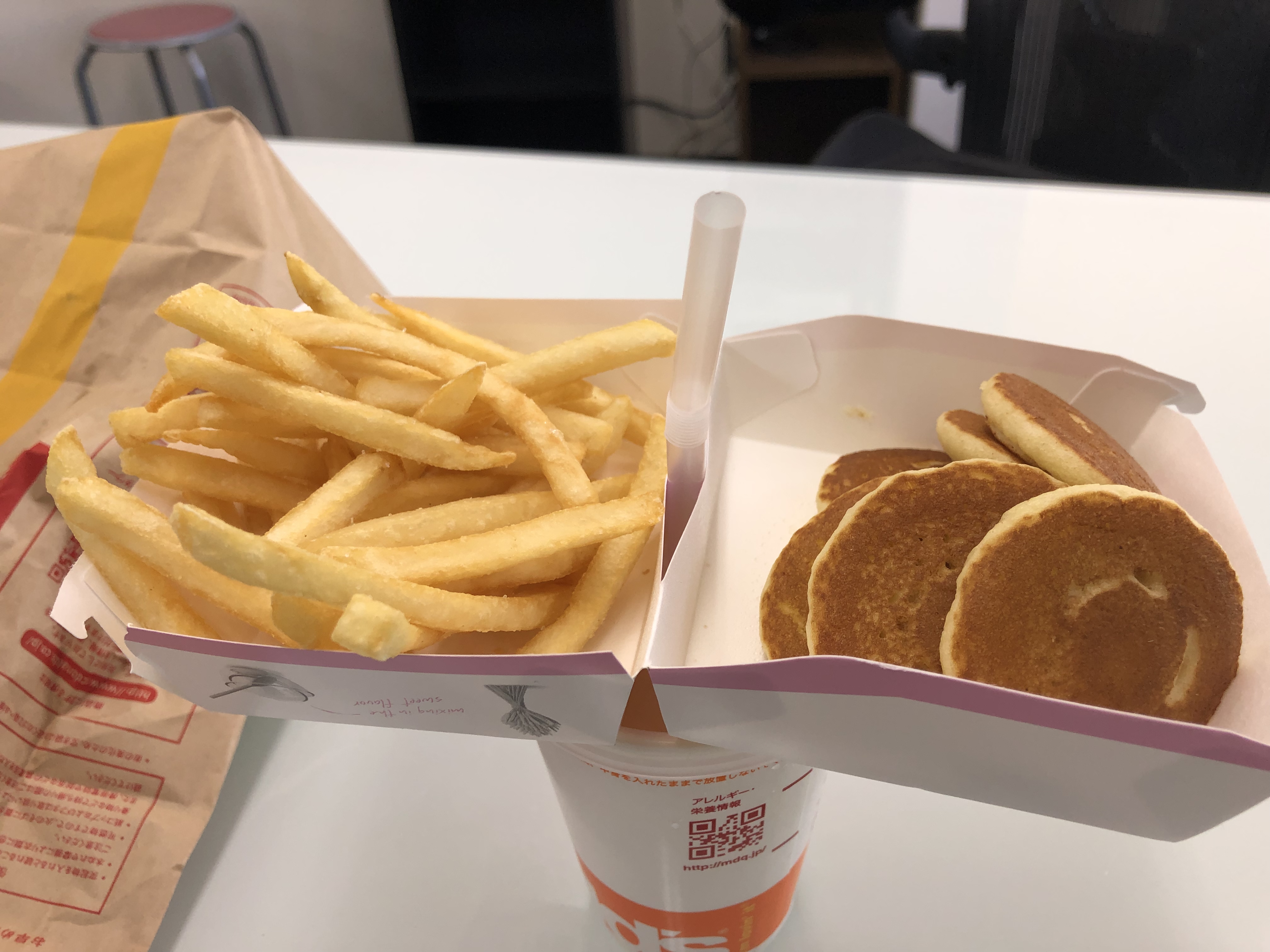 It’s even possible to apply the butter and syrup with one hand thanks to these handy packets. 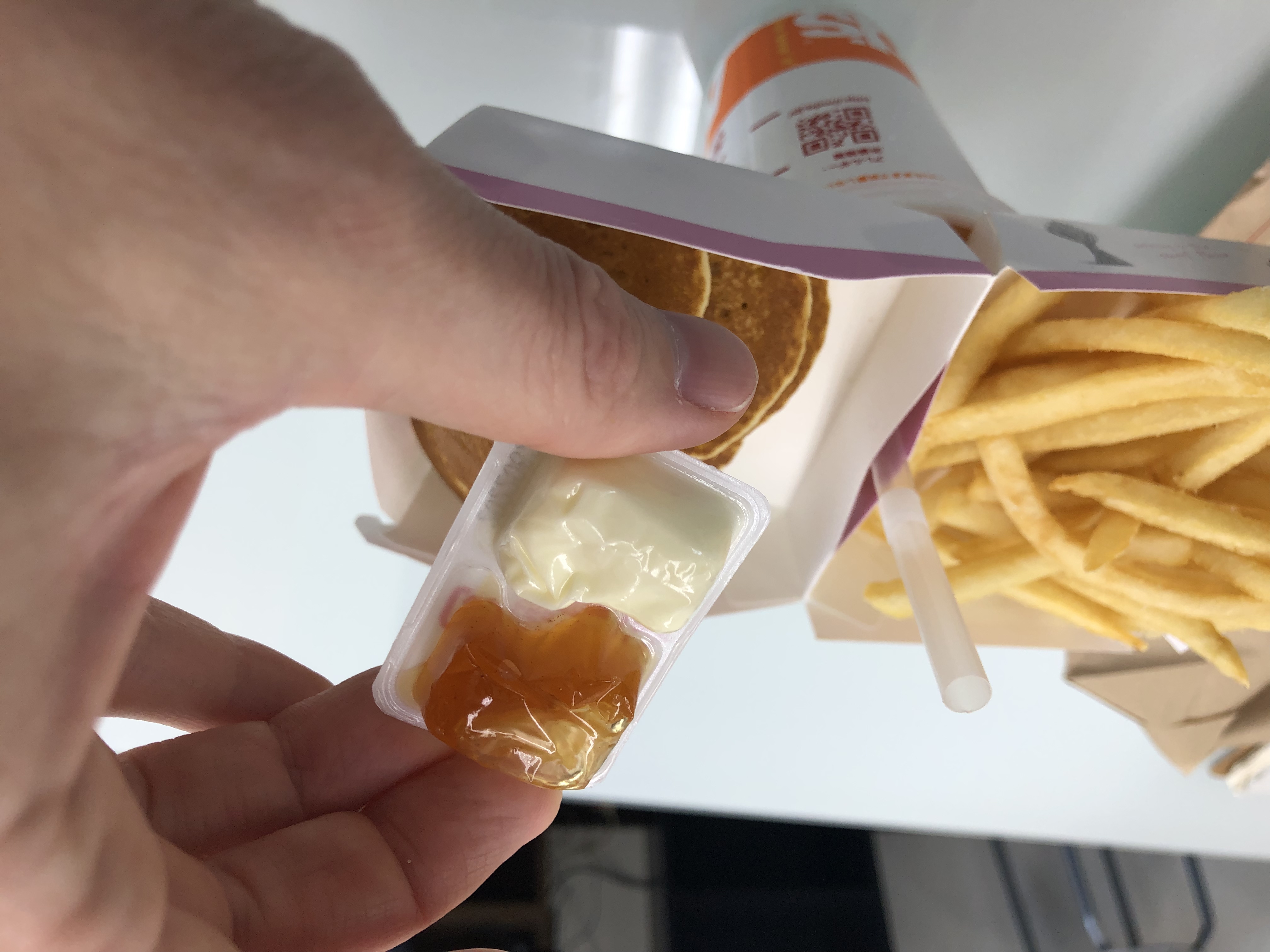 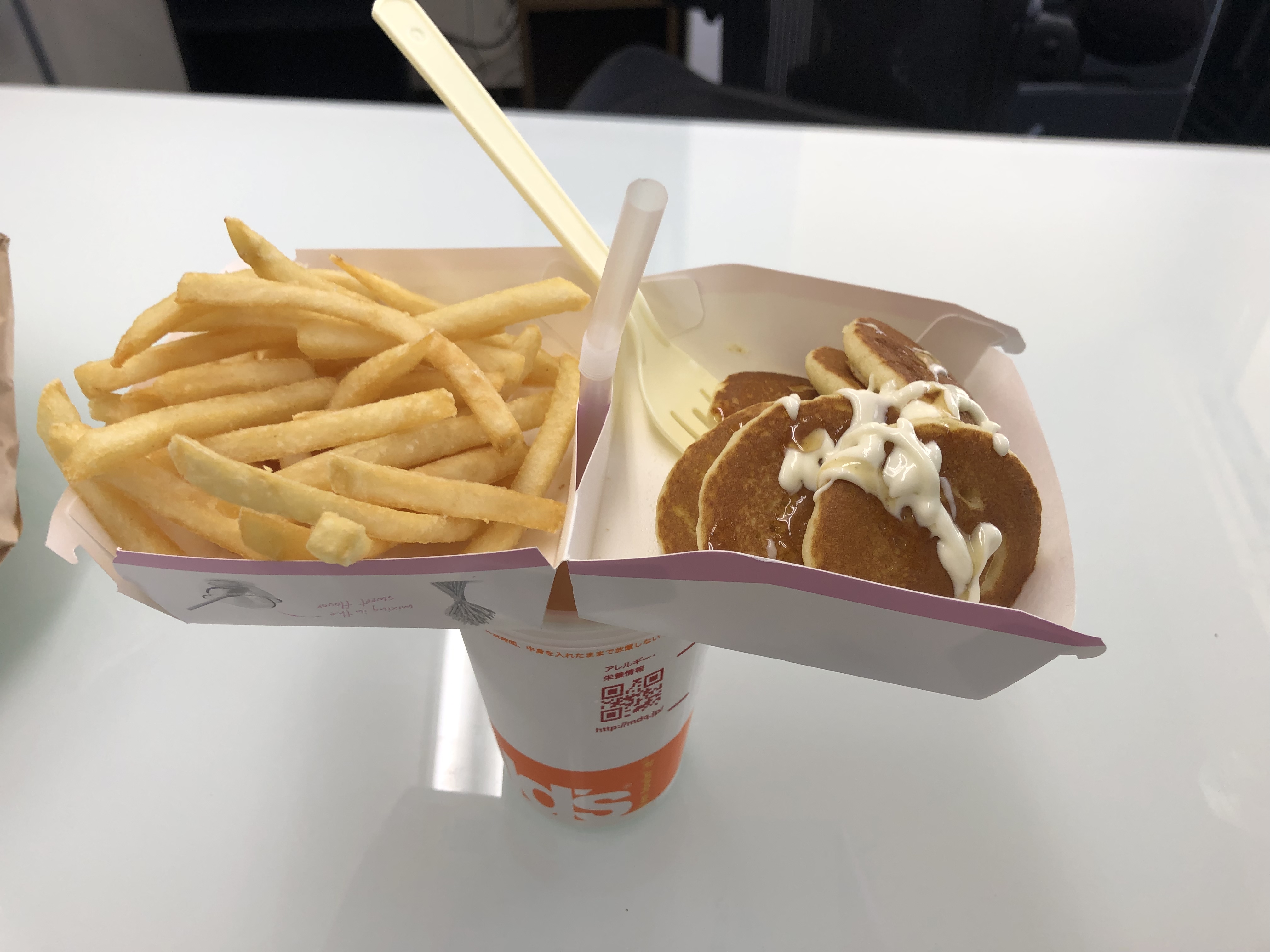 This arrangement could even stand up to the pressure of forking up a pancake without an issue.

In conclusion, this trending McHack turned out to be even more effective than I expected. My only complaint was that they gave me two of the exact same Doraemon toy with my two Happy Meals. 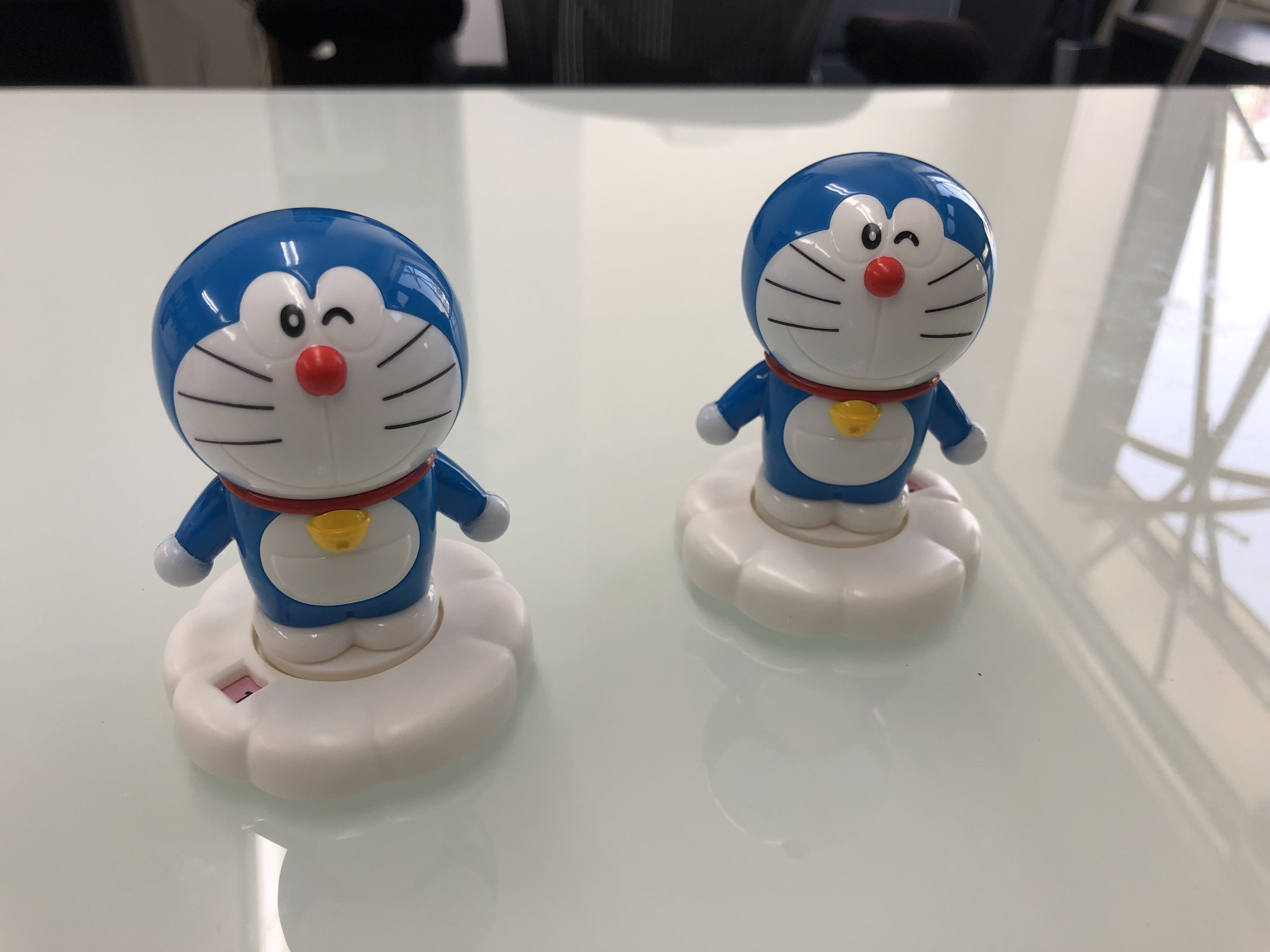 Regardless, if you find yourself stuck at work and afraid your hands are too tied to catch the brief beauty of sakura, give this trick a try and start your spring off on the right track.