Happy Monday Everyone! Today I’m excited to have debut author Chris Negron here to share about his MG contemporary Dan Unmasked. It’s gotten great reviews and sounds so interesting with a focus on friendship, superheroes and baseball. I’m not a fan of baseball but I’m looking forward to reading this one.
Here’s a blurb from Goodreads: 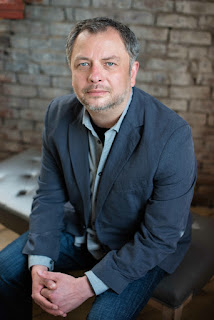 A Junior Library Guild Gold Standard Selection and an ABA 2020 Summer / Fall Indies Introduce pick.
Whether they’re on the baseball field or in Nate’s basement, devouring the newest issue of their favorite comic book, Dan and Nate are always talking. Until they’re not.

After an accident at baseball practice—an accident that Dan is certain he caused—Nate’s stuck in a coma. Usually, Dan can rely on his and Nate’s superpower—the secret language that only they know, a language of raised eyebrows and subtle nose taps.

Now, if Dan ever wants to see Nate tap his nose again, he’s got to figure out a way to wake him up. But for all the time he’s spent reading about the adventures of Captain Nexus, Dan knows he’s no superhero. Heroes have powers—and without Nate, all Dan has is a closet stuffed with comics and a best-friend shaped hole in his heart. There’s no way a regular kid can save the day all on his own. Right?
Hi Chris! Thanks so much for joining us.
1. Tell us about yourself and how you became a writer.
I’ve wanted to be a writer since I was probably about Dan Summers’s age in Dan Unmasked – thirteen years old. In fact, I can even remember playing basketball in a friend’s driveway after a Dungeon & Dragons session, and stating unequivocally that I was going to turn our adventures into a book one day. At the time I was obsessed with fantasy – it was as much what I was reading as what I was doing hobby-wise with those marathon D&D sessions. I think that driveway declaration was me giving myself permission to have this long-term dream to become a writer.
Ah, but long term was indeed what it turned out to be. From that day until now, I traveled a winding path that included studying Computer Science at Yale University, followed by entering the business world as an Information Technology (IT) consultant. In fact, IT is still my day job. Eventually, though, I stepped back into the version of me from that driveway. The one with the dream to become a writer as well.
It wasn’t until I started writing certain short stories that I realized I had a natural voice for the middle grade genre. After that, I started seeing how so much of the media I enjoyed could be considered “middle grade” too. I get really excited by stories like Super Eight or E.T., where bands of kids team up to solve a problem. Dan Unmasked was my first manuscript for kids, though it too traveled a long, twisting road to become the book it is today.
2. Glad you were able to follow that dream you had as a child. Where did you get the idea for Dan Unmasked?
That same year when I was thirteen was a very special one in my memory - 1984. When I look back on it, it seems like so many of my favorite things come from then, whether they be music or movies or – maybe especially so – comics. That year was also when the San Diego Padres – always and forever my favorite baseball team – made their first World Series appearance.
With all those favorites coming from that one year, it struck me that to be thirteen was – at least for me – to be at an age where you’re open to all sorts of good stuff, new stuff that seems to have been made just for you and becomes your immediate and lifelong favorite. On the flip side, though, I think that age can also be a time for a particularly strong vulnerability to the bad stuff, too.
I had a friend who was injured at a baseball practice, and I remember having a desperate urge to fix it, even though I wasn’t involved in the incident. Still, I remembered that emotion really well. And of course when I started working on Dan Unmasked, one of the things you do as a writer is ask yourself a ton of those “What If?” questions that lead to transforming something personal into something that perhaps takes on a more story-sized shape.
What if my friend’s injury had been more severe? What if I had thought the accident that caused it was somehow my fault? How much more desperate would I have been to find a way to fix what I thought I had broken?
So that’s the story I gave to Dan Summers, and it’s a big part of the inspiration for Dan Unmasked. I think I wanted to write a book for kids that spoke to the healing power of friendships – both old ones and new ones, to depending on teams, to being careful about blaming yourself too hard when accidents happen, and the rest of the story arose from merging Dan’s emotions about his best friend’s accident with those underlying themes. I hope, in the end, that the book delivers a tale that is equal parts action-packed and heartfelt, and most importantly, that it finds readers who connect with it the way I do with my own memories and emotions.
3. I’ve read that you do a good job of making Dan’s hobbies—superheroes and baseball—an integral part of the plot rather than just sides hobbies of your main character. Share a bit about your plotting process.
I’ve learned a lot about plotting since I moved into the middle grade genre. Probably the most 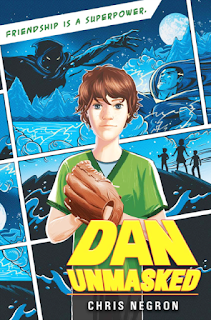 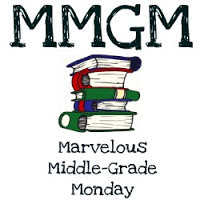 Giveaway Details
Chris has generously offered a hardback of Dan Unmasked for a giveaway. To enter, all you need to do is be a follower of my blog and leave a comment by August 22nd. If your e-mail is not on your Google Profile, you must leave it in the comments to enter the contest. Please be sure I have your email address.
If you mention this contest on Twitter, Facebook, or your blog and/or follow me on Twitter, mention this in the comments and I'll give you an extra entry for each. You must be 13 years old or older to enter. This giveaway is U.S.

Marvelous Middle Grade Monday is hosted by Greg Pattridge. You can find the participating blogs on his blog.

Monday, August 17th I have an interview with debut author KayLynn Flanders and a giveaway of her YA fantasy Shielded

Monday,  August 24th I have an agent spotlight interview with Veronica Park and a query critique giveaway
Tuesday, September 1st I'm participating in the September to Remember Giveaway Hop

Wednesday, September 2nd I have an interview with debut author Andrea Contos and a giveaway of her YA thriller Throwaway Girls

Monday, September 7th I have an agent spotlight interview with Carlisle Weber and a query critique giveaway

Monday, September 14th I have an interview with debut author Rebecca Coffindaffer and a giveaway of her YA space opera Crownchasers

Wednesday, September 16th I have an agent spotlight interview with Erin Casey and a query critique giveaway
Hope to see you on Monday!