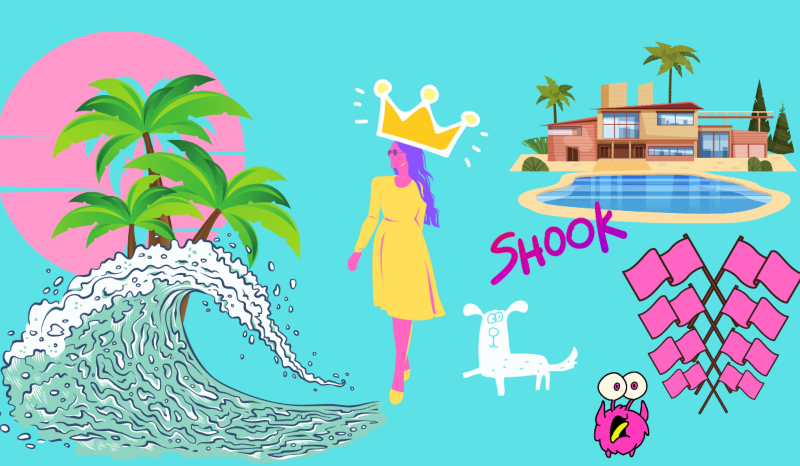 When your formerly “pleasant” relationship goes up in flames with one explosive discovery, it’s easy to feel blindsided. That’s exactly how I experienced learning of my husband’s $460k+ OnlyFans addiction, as well as his clandestine foray into the “virtual sexual services” market. I was caught entirely off guard, and there wasn’t an ink drop of writing on the wall…

Unfortunately, that’s a lie — I just didn’t know it then. I tried to convince myself that he abruptly changed, and his declining moral compass was a recent development. I couldn’t possibly have foreseen the cheating, the lying, the spending, or the recklessness. In retrospect, that just isn’t true. There are always red flags, and the partners who shock you the most were probably dropping breadcrumbs of deceit all along. If you’re anything like me, you simply may not have known how to spot them early on.

1. You used to think this was his strength

My husband had an unusual talent that enchanted me from day one of our courtship: his rapid, witty delivery in response to every question, concern, or conflict tossed his way. It seemed there was no obstacle for which he couldn’t provide an immediate solution. Impressive, isn’t it?

I never considered that “quick on his feet” talent — or should I say, quirk — might be indicative of something a bit more sinister. News flash: If something sounds a little too smooth, slick, or good to be true, run for the hills — where there’s smoke, there’s fire.

In the case of my husband, his quick-witted answers would be used against me years down the line as an endless supply of “get out of jail free” cards. While Hubby’s mouth moved at a mile a minute, he couldn’t sugarcoat his wrongdoings forever. I remember the day I confronted him about his infidelity, he spun it into a business opportunity. Somehow, his mockery of our marriage vows took a backseat to the new “venture” he’d stumbled upon.

2. Everyone loves him for this characteristic

Despite the saying “misery loves company”, my husband’s charismatic disposition would prove quite the opposite. His abnormally chipper attitude — even in the face of adversity or conflict — acts like honey to bees, attracting friends, colleagues, romantic interest, and business opportunities left and right. People love my husband to a sickening degree — well, until they really get to know him, that is.

While his cheerful demeanor is perfect in a sales capacity, it’s slightly unnerving when that artificial dopamine transcends into our marital relationship. Each time he flashes me that laser-whitened toothy grin, insincerity seeps from the corners of his mouth. Unlike every business partner, employee, and high-class hooker he’s screwed over, I know his charm is a calculated sales tactic, rather than a shred of genuine kindness and affection.

Having seen him flash me the same wide smile he’s used on countless colleagues, partners, corporate adversaries, and mistresses, I realize I’ve been played just like the rest of them.

3. This was once an endearing security blanket

There’s something romantic about a partner taking a stand, losing their cool, and reverting back to their animalistic tendencies. It isn’t so much the “bad boy” attitude that’s attractive, but rather their show of brazen confidence to defend their turf and protect their position at all costs.

My first taste of my husband’s vindictive, below-the-belt attack on a threatening aggressor was startling, exciting, and endearing. It was a business deal gone sour, and in our early years of dating, I had never heard my husband pull such punches. I’ll be honest: It was hot, sexy, and convinced me I’d hitched my raft to the right captain to steer us both to safety.

Unfortunately, I failed to realize that a partner who will happily throw a low blow punch at an opponent to save face, reputation, or money will do just the same to a spouse like me, should our desires conflict. The only thing worse than asking for a divorce is being too scared of your own spouse to bring up the topic.

4. He shielded you from things of this nature

The first sign of relationship trouble occurs when a partner says “don’t worry about it” and assures those “big boy problems” needn’t concern you. What’s worse is when they say “I’ve got it covered” with no further explanation.

Sadly, many inexperienced partners dealing with a power differential due to a disparity in age, income, or education may be lulled into the dangerous trap of partner-enabled ignorance, leaving them with the perpetual lower hand. I would know; I’m one of them.

Blindly waltzing into a marriage with a man a decade my senior, with years of business experience and an 8+ figure net worth starkly contrasting my student debt put me at an inherent disadvantage. His secret? He liked it that way. Knowledge is power, and he had both, while I had neither.

If a spouse shields you from headaches like discussions surrounding finances, business deals, or problems at work, insert yourself. What may appear as a partner’s generous decision to shield and protect you could really be a strategy to carve out his own autonomy and remain forever in the driver’s seat.

5. You’ve witnessed this flare up, albeit rarely

No matter how cool, calm, and collected your partner appears most of the time, they likely expose a glimmer of real, raw, less than perfect emotion every now and then.

These incidents aren’t shocking because they’re loud, scary, or threaten physical harm; instead, they’re scary because they’re seemingly vastly out of character — and that’s exactly the point.

A partner who can maintain a happy-go-lucky attitude 99% of the time and abruptly morph into an erratic “rage-aholic” moments later is a geyser in disguise, just waiting for the perfect storm to eject that pent-up venom and angst upon those in their path.

6. He will tell this like it is — and that’s the scary part

Betrayal isn’t always obvious or expected — that’s what makes it all the more scarring, jarring, and hurtful. Believe it or not, a boastfully “honest” partner can be just as bad as an openly deceptive one.

My husband is proudly honest to a fault. His obsession with honesty allows him to detach his emotion from a scenario when recounting or justifying the sequence of events. Thus, he’s mastered the art of admitting to unethical or unsavory actions without accepting a shred of guilt.

When he spun his high-end hooker patronizing hobby into “market research” for his new venture and relayed the “opportunity” with a straight face, it was clear he didn’t feel he’d done a thing wrong. It’s almost psychopathic how he fails to acknowledge the deceit he’s embodied and its significant wound to our marriage. He’s beyond callous; he’s emotionless and ruthless.

7. His consistency is his biggest tell — you just can’t see it yet

In the days of online dating — which I missed out on by about a decade and a half — it seems you can pick a partner off a menu. It sounds great, practical, and tempting, for sure. However, no matter how many common interests or compatible astrological signs a prospective partner may tick off, there’s one factor no online dating app can convey: consistency. That’s something only time will reveal, and in my case, I thought I hit the “consistency jackpot”.

My husband was consistently chipper, yet serious. Risk-loving, yet strategic. Quick-witted, yet calculated. Calm, despite conflict. Comforting, yet vague. He was the consistent safety net and backstop for any potential problem in our lives, and his consistency led me to believe he’d never dare stray or betray.

What I couldn’t then fathom was the idea that he was also consistently dishonest, secretive, and solely self-interested, at my very expense. Once my private investigator helped piece together the underground operations and adulterous activities in which Hubby partook, his pattern of secrecy and deception was revealed as just that: heartbreakingly consistent, dating back years of deception.

8. You mistook this trait for confidence, but really, it’s far worse

Men like my husband — and many of his business owner friends — exude a level of alpha male confidence that commands control in every situation. Well, I used to call it confidence…

The silver lining of an arrogant, entitled, “my way or the highway” partner is an elevated sense of control by association. Seeing him be so sure of himself and unwilling to take “no” for an answer empowered me to believe the sky is the limit. If I only had a few more ounces of the courage and self-assurance he did, maybe I would have gone after my former dreams and made something of the career I gave up.

Unfortunately, the sky isn’t always the limit when you play by the rules. Hubby, on the other hand, has embraced enough arrogance and unwavering entitlement to decide the rules don’t apply. What’s worse is that along with chucking the moral compass-governing rulebook, he’s also decided he’s entirely above reproach. Men like him can “do no wrong” in their mind, and somehow the partners, employees, friends, and customers in their circle seem to drink the Kool Aid and nod along with them.

The biggest indicator of a future betrayal

Your partner doesn’t need to exhibit a single one of those red flags to turn on you when you least expect it. There is, however, another trait that may be the greatest indicator of their future betrayal. You see, I used to think my marriage was “okay” because we didn’t have explosive, passionate fights that ended in breaking pottery and slamming doors. In contrast, our marriage appears fairly calm and vanilla at a glance. And that’s exactly the problem.

The opposite of love isn’t hate; it’s apathy. And an apathetic spouse may betray you at any time; they simply don’t care, and that’s what makes them all the more perilously unpredictable.

Photo credit: Owned and created by the author(Confessions of a Trophy Wife)

The post 8 Red Flags That Your Partner Will Turn On You When You Least Expect It appeared first on The Good Men Project.